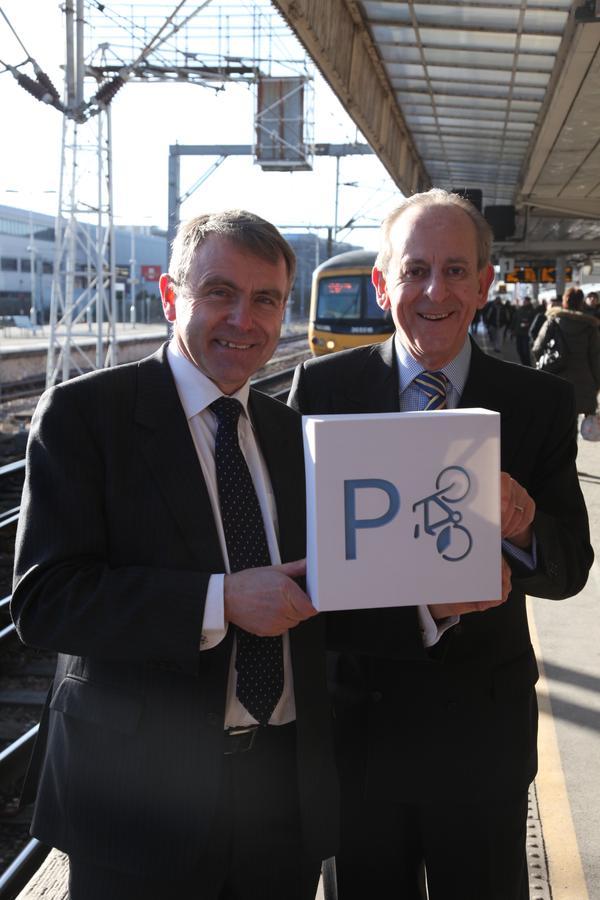 PlusBike lists cycling facilities at every station, along with conditions of carriage for your bike
by Sarah Barth

Rail users should from next week find it easier to travel by rail with their bike, thanks to a new addition to the National Rail website and apps.

PlusBike was launched by Transport Minister Robert Goodwill MP and will help passengers who want to cycle to and from the railway station by giving details about the facilities available at stations and on board.

Developed by the Association of Train Operating Companies and National Rail, the app was funded by the Department of Transport.

Cycle-rail passengers will be able to quickly find out about:

PlusBike was launched in Cambridge, where work on the station’s new £2.5million CyclePoint officially got underway yesterday.

CyclePoint will significantly improve cycle facilities for passengers using Cambridge station, which is one of Britain’s busiest regional stations.  It aims to combine all the services cyclists need in a single onsite station facility and is scheduled for completion by the end of this year. It will include safe and secure parking for 3,000 cycles, a retail and repair facility and cycle hire, and will be the biggest facility of its kind in the UK.

Transport Minister Robert Goodwill said: “Cycling is great exercise and benefits the environment. The funding we have provided means Cambridge station can start work on some of the best cycling facilities in the country.

“The new PlusBike app will help people get information about their local facilities so they can plan ahead. Used together, bikes and rail can help reduce carbon, cut congestion and deliver real economic benefits so we want it to be as easy as possible for people to cycle to their local train station."

Conrad Haigh, Head of Integrated Transport at ATOC, said: “PlusBike and other improvements to online information will make it so much easier for passengers getting to and from stations by bicycle to be aware of new facilities, such as new cycle hubs like Cambridge.

“Together, both these show the industry’s dedication to improving the experience for those who want to combine bike and rail as part of their door to door journey, and encouraging more passengers to try this convenient, economical and environmentally friendly mode of travel.”

Jamie Burles, Managing Director, Abellio Greater Anglia said: “The start of works on the CyclePoint is a significant step in the project to improve facilities for rail passengers using Cambridge station, and I am particularly pleased to welcome the Transport Minister Robert Goodwill to officially mark the beginning of this exciting scheme, which confirms our commitment to sustainable forms of transport and the whole door to door journey.”

Late last year, Northern Rail’s role in the Tour de France Grand Départ in July, the biggest event it has ever had to cope with, led to it being named Operator of the Year at the 2014 National Cycle Rail Awards, where it also won the award for Best Customer Service.

Road closures associated with the Tour de France’s visit to Yorkshire put unprecedented pressure on the region’s rail network, and Northern Rail spent a year working with the Grand Depart organisers, British Transport Police and others to plan how it would handle the influx of visitors.

According to the National Cycle Rail Awards website, “Northern Rail’s key objective was to deliver a successful event and enjoyable experience for customers, while maintaining its cycling policy of two bikes per train.

Whether the new app actually helps when facilities on the ground aren't up to scratch remains to be seen however.

Last year, one rail commuter expressed his frustration at being unable to use a secure double-decker bike parking facility that opened last year at his local station – despite the fact that it is often only half-full.

Antony Harvey commutes from Bishop's Stortford, Hertfordshire, and told road.cc that up until last year, free bike parking was provided and was always “pretty crowded.”

Users are required to obtain a fob to gain access, in return for a cash deposit of £25. Antony admits that “I was slow off the mark getting a fob largely because I was going through a period of working from home,” but when he went to the station a week later to obtain a fob, he was told all 200 had been distributed.

A further 30 were subsequently allocated, and Antony is now on a waiting list to obtain his own fob, with no news of when one might become available.

He told us: “I was pretty shocked about this as the facility is never more than two thirds full, usually close to half full,” attaching pictures taken at 11:30am last Friday.

“There is a tiny free bike parking facility but it's always completely rammed, never a space by the time I get there,” he went on. “Also, I want to park in the empty secure spaces I can see. I'm happy to pay!”