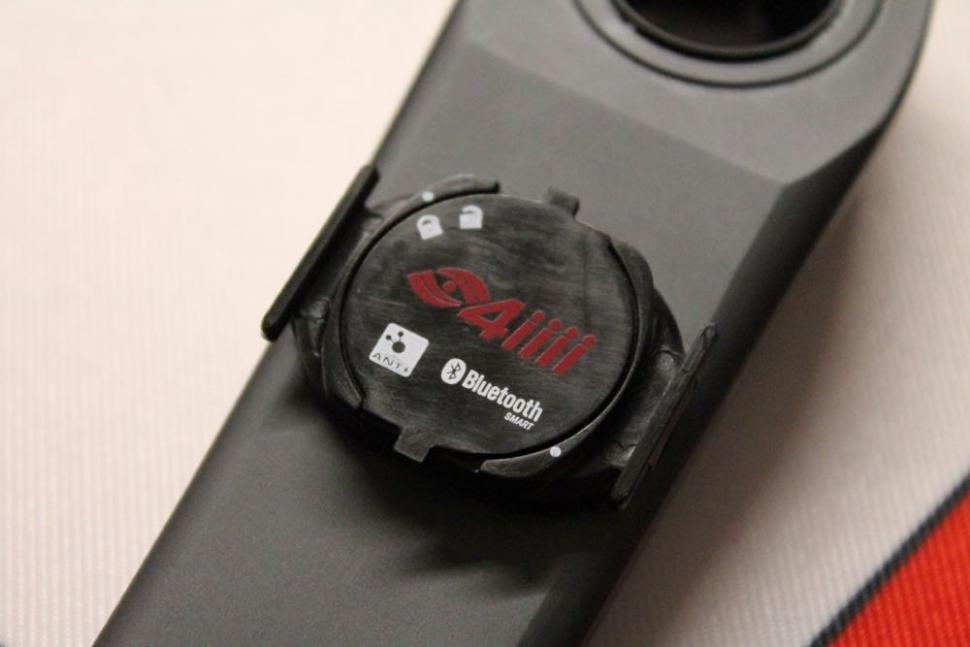 We've seen a zillion new products this week at the Core Bike Show and The Bike Place and here are five of the most interesting. We'll kick off with a product that, if it delivers on its promise, is a potential game changer in the power meter market.

What we have here is a power meter from Canada’s 4iiii priced at just £349. The 4iiii Precision power meter looks a little like the one from Stages, but rather than all the technical gubbins sitting inside a pod already on the crank arm, the little pod (36mm x 25mm x 7.2mm) is stuck to the outside of the crank using epoxy by you. Once in place, the system needs an initial calibration. After that, strain gauges measure crank deflection as you pedal – it takes measurements 640 times per second) and that information is used to come up with your power. 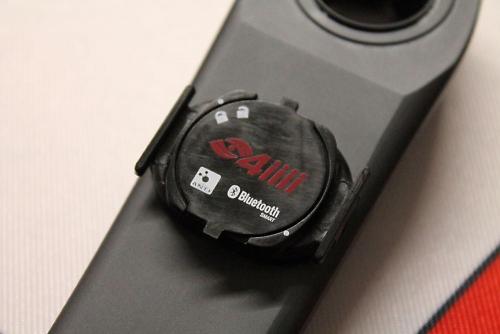 It sends data using both Bluetooth Smart and ANT+ so it’ll work with a Garmin computer, for example, and most mobile phones. You don’t need to recalibrate to account for temperature; that is done automatically.

One Precision power meter will measure your power on one side and double it to give your total figure, but you can install one on each side to give independent measurements.

It runs on a coin cell battery – you get about 200hrs from a battery, we’re told – and can be installed on most aluminium cranks (see a list at http://4iiii.com/product/precision/). Carbon compatibility isn’t far off, which is good news for users of some Campagnolo cranks, for example. 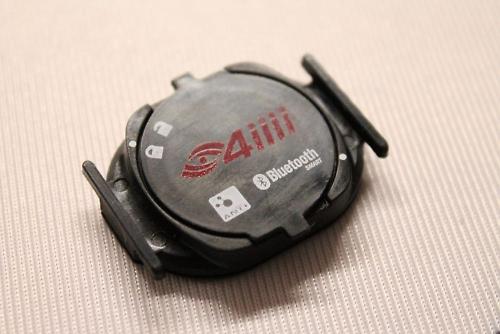 4iiii claim the Precision is accurate to within 1% although they don’t say if that applies to all circumstances.

£349 sounds a very attractive price. We’ll try to get one in for review on road.cc.

No, really, come back! This is much more interesting than you’d think.

Ask anyone why they don’t use tubular tyres and the answer is likely to contain a reference to gluing them in place. You’ll likely hear terms like ‘time consuming’ and ‘messy’ bandied about. Only lunatics enjoy the process. Of course, you can use tape instead, but then you might be worried about the adhesive strength. Effetto Mariposa’s new Carogna tape is said to stick tubs as strongly as mastic. Owner Alberto De Gioannini told us that it can handle temperatures of 150°C for extended periods of time and peaks of 180°C for short periods while things can start to move at about 90°C with the market-leading tape from Tufo (of course, he’s likely to big-up his own product).

The Carogna tape uses two different types of glue, one on the tubular side and one on the rim side.

The glue on the tubular side is 1mm thick, permanent and waterproof. It is squeezed into all the little troughs and depressions in the tubular base to maximise contact when you first inflate the tub. It is said to achieve 90% of its full strength within 8hrs, so leave it overnight and you’re pretty much there. 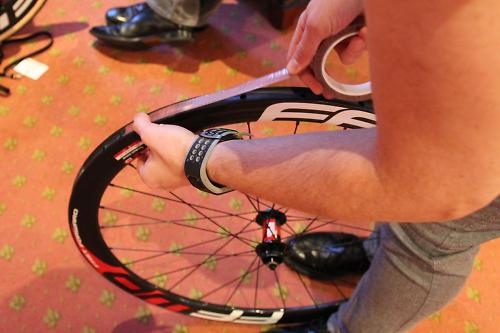 The glue on the rim side is very different, staying on the tape rather than on the rim when you remove the tub, so you don’t need to spend time cleaning up the rim surface before you can fit a new tyre.

Effetto Mariposa say that the tape works with all tubular base tape materials and you don’t have to prepare the surface in any special way for either carbon or alloy rims.

We saw a tub tyre fitted with this stuff without any drama in about 5mins and we collected a couple of rolls for review. We’ll let you know how we get on.

ISM – it stands for Ideal Saddle Modification, fact fans – twin nose saddles have been around for a few years although we’ve not featured them all that much on road.cc. The idea behind that twin nose design is to reduce the perineal pressure that can cause numbness and worse. The PN1.1 (£99.99) is a new saddle for 2015. PN stands for ‘Performance Narrow’. We’re learning a lot today, aren’t we? It comes with deep padding that anyone with a triathlon-style slim seatpad is likely to appreciate, although it’s not aimed exclusively at triathletes. If this pink version doesn’t do it for you, it’s also available in black and in white. The Attack (£174.99), which has been around for a couple of years, is aimed at road bike riders. At 110mm wide, it’s ISM’s narrowest saddle, coming with foam and gel padding and titanium rails.

Mio are producing several fitness devices that measure your heart rate via wrist units rather than chest straps. 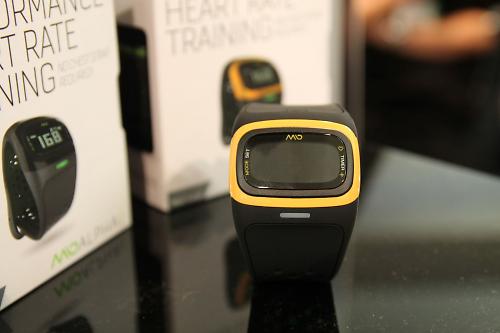 You can set your own heart rate zones and it'll talk to fitness apps on your phone (iPhone or Android) via Bluetooth Smart. The Fuse (£126.99) is a clever wrist strap that monitors your level of activity throughout the day, the idea being to help you achieve your fitness goals.

As well as taking your heart rate, it tracks your steps, pace, the distance you’ve moved and calories. The display is customisable and you can input your own heart rate zones.

When you get on your bike, the Fuse can send your heart rate data to your bike computer or GPS watch via ANT+ (so it’ll connect to a Garmin, for example), and it can also connect to fitness apps on your phone via Bluetooth Smart. 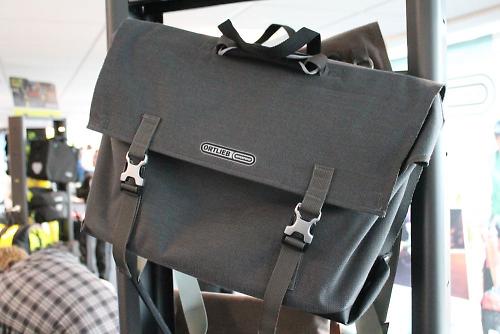 Ortlieb have a new Urban Line of waterproof bags. This one is the Commuter Bag and it includes a laptop compartment and a detachable shoulder strap. As well as this pepper colour, it’s also available in a coffee finish (see below).

The Commuter Bag is available with one of two different rack mounting systems, QL2.1 and QL3. Here’s that QL2.1 system on one of the other bags in the range. It’s a one-piece design that’s intended to be stiffer than previous systems, and it’ll be found on nearly all panniers in the range in future. 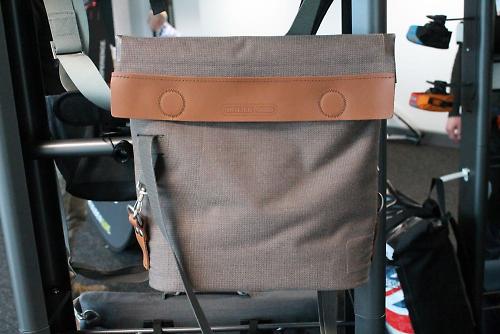 This Barista handlebar bag (£135) is also from the Urban Line. It is made from PU-laminated Cordura-cotton-mix and the flap is magnetic. It comes supplied with the Ultimate6 mounting system (compatible with Rixen&Kaul).