We've been at Manchester Velodrome today at the behest of Lazer who have recently been announced as the helmet supplier to British Cycling for the next three years. They're going to be working with the elite athletes to fine-tune their helmet offering ahead of the Rio Olympics in 2016.

Lazer are also keen innovators; you may remember that at last year's icebike show they were demonstrating a helmet with a built-in heart rate sensor that they'd developed with Lifebeam, who are more used to supplying the sensing technology to military clients. That work is ongoing and Lazer are looking to add cadence sensing to the helmet. Cadence sensing through your head. Seems odd, but they're pretty confident it's a goer. 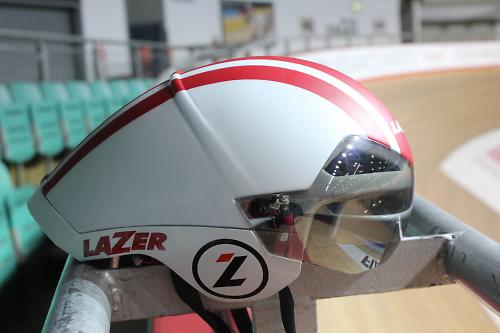 That wasn't their newest innovation though: the i-Sensor was.

Picture the scene. You've laid down some serious wedge for a posh time trial bike and an aero lid, and you've even booked a bit of wind tunnel time to hone your position to perfection. But once you're out on a windy dual carriageway trying to keep your concentration and form, it's easy to let that position slip. enter the i-Sensor. 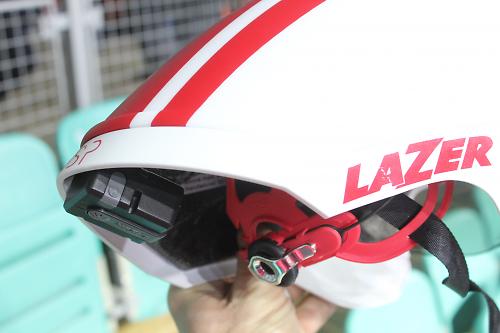 The i-Sensor itself is a small black box that sits on the back of your helmet; Lazer have designed the Wasp and Wasp Air TT lids with a flat surface for it to attach to. It contains a tilt angle sensor, a speaker and a mechanism to vibrate the shell of the helmet. You set it to your desired position, and should your concentration start to lapse it'll beep and buzz gently to remind you to keep your head straight. The further you go from your desired angle, the more urgently it'll try to warn you. The noise isn't as effective as the vibration, which you can feel through the whole helmet and should be enough to make you aware even if there's wind in your ears and traffic thundering past.

You can configure the i-Sensor using a USB port. It's possible to load and save the configurations so you can adjust your position on different bikes, and you can also set the angle variance at which the warnings start. So if you're starting out you might want to give yourself fifteen degrees of grace, whereas if you're racing at a high level it might be five degrees, or less, before your head starts buzzing. As well as loading a profile there's a simple setup whereby you just hold down a button on the sensor when you're in the position you want, and it'll use that as ground zero. It's certainly an interesting development, and one that Lazer intend to bring to market. At the moment the i-Sensor only senses in one axis so it won't notice if you have your head slightly askew, and it's going to be a fairly expensive option: Guido de Bruyne, Lazer's development chap, said it was probably going to be 150EUR extra on top of an already pricey TT lid, so it's not one for the evening ten. But head position is fairly critical to the effectiveness of an aero helmet and there's always riders out there looking to shave off the seconds, so there'll certainly be some interest.

We asked Team GB riders and team pursuit stalwarts Elinor Barker and Katie Archibald what they thought of it (since they were there it seemed rude not to) and the response was pretty positive: perhaps not for track riding where the conditions are controlled (and the races shorter) and it's perhaps easier to keep your form. But for a road time trial, where your concentration can wander, they both thought it was certainly worth a go.

There's no confirmed release date on the i-Sensor at the moment but production is underway, so expect to see it by the end of the year. Whether Lazer's next step is to amalgamate these different helmet technologies remains to be seen: what if your helmet could buzz you to let you know you've gone out of your heart rate zone?