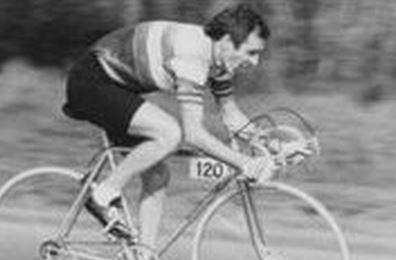 Documentary by Ray Pascoe screens at Phoenix Cinema, East Finchley on 25 Jan, followed by Q&A with cyclist
by Simon_MacMichael

A documentary about one of the all-time greats of the British time trialling scene, Alf Engers, will have its premiere at the Hammersmith Cyclists Film Show next month – and the DVD of the 76-minute feature is already on sale.

Made by Ray Pascoe, Alf Engers aka The King will be shown on Sunday 25th January at 1pm, with the screening taking place not in Hammersmith, but at the Phoenix Cinema in East Finchley.

During a career that spanned two decades from the late 1950s to the late 1970s, Engers set records including being the first man to break 50 minutes for a 25-mile time trial at an average speed of more than 30 miles an hour.

With rare film footage of the time, extended interviews with Engers today, and contributions from his colleagues and rivals, this film gives us an intimate portrait of a rebel of his day, showing a rider with panache, style and innovation and of a vanished era in the sport of time-trialling.

It will be followed by a Q&A session with the cyclist himself, while the supporting features are Come on Eileen (Anthony Collins, 2014) plus extracts from Pascoe’s 2012 production, Racing Is Life: The Beryl Burton Story.