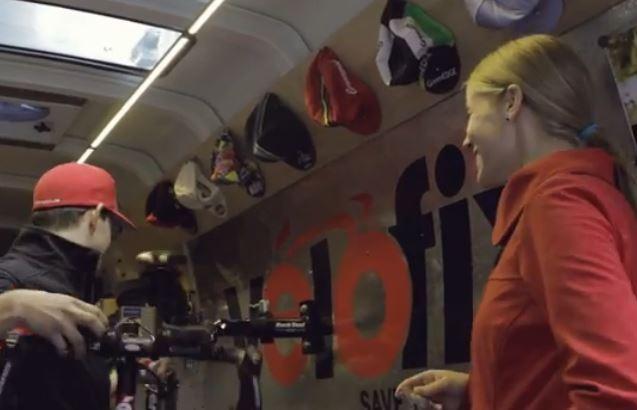 Velofix founders growing business through franchising - and say no reason it couldn't come to the UK...
by Simon_MacMichael

Three cyclists in Canada have secured $300,000 (£167,700) in funding for their mobile bike servicing and repair business – and say there is no reason it couldn’t eventually come to the UK.

They say that their business, Velofix, is differentiated from similar enterprises due to the technology it employs, and are currently rolling it out across Canada as well as planning to launch the concept in the United States and Australia.

Velofix was founded in Vancouver in 2012 by Chris Guillemot, David Xausa and Boris Martin to launch Velofix, reports the Financial Post. The concept is explained in this video.

Guillemot said: “We love cycling but had experienced challenges getting to a bike shop. Here in Vancouver, it can take between seven and 10 days to get a bike serviced. The three of us started talking about making a premium service mobile by putting the shop inside a van. ”

After the three friends had drawn up a business plan, they bought a Mercedes Sprinter van, with Martin – who started working in bike shops in his early teens – setting about designing a 100 square foot workshop inside.

“He designed the electrical systems, compressors, and set it up ergonomically so that all the tools are exactly where you need them to be,” explained Guillemot.

The company began operating in January 2013, and Guillemot underlined the use of technology that he believes sets the business apart from its competitors.

“One of the challenges of operating a mobile service is scheduling,” he said.

“We have proprietary cloud-based software that books a service, route optimizes the van and allows the mechanic to wake up in the morning and see who is on their call schedule [and] what they booked so they can make sure they have all the parts they need.

“We have a just-in-time inventory system, payment processing and online operating manuals,” he added.

The trio engaged former Olympic triathlon champion Simon Whitfield as a consultant, and he became its first franchisee.

Guillemot said that the pricing of franchises, for which a finance package is available, is aimed at attracting people who want to set up their own business, and that prices charged to customers are similar to those in bricks-and-mortar bike shops, but without the overheads.

“For about $35,000 to $45,000 in upfront capital you can get a truck on the road,” he revealed. “It’s very affordable and that was intentional because we want to sell the vans to young mechanics … who likely don’t have a lot of capital.”

He added: “We didn’t invent mobile bike shop but we haven’t found anyone with multiple trucks on the road.

“If it works in Vancouver, there is no reason it couldn’t work in London or New York or anywhere people are time challenged. We’re in discussions now with a group in Australia looking to roll out vans there.”

The business currently has five trucks generating anticipated sales this year of $760,000 with gross margin standing at 60 per cent.

Their Dragons’ Den appearance resulted in a 20 per cent stake being sold for $300,000 to a pair of investors, Jim Treliving and George Melville, who have built their own business using a franchise model.

With the help of their new backers, they are now preparing to enter the US market. Treliving said:  “It was a quick due diligence because they were so prepared. The model works. They are helping consumers save time to ride more.”

However, he cautioned: “The U.S. is litigious. You have to make sure you deliver what you promise.

“The key will be finding the right franchisees, who in this case have to be both a good bike mechanic and a good business person, which isn’t easy.

“The other scenario is to have a money person who works in partnership with a repair person. We also have to pick the right locations. Two-thirds of the markets are seasonal; we have to balance that.”

John Cho, a partner at KPMG Enterprise, said that while the business sat well with the current interest in cycling, the business’s founders would do well to concentrate on the domestic market before expanding internationally.

“Their convenient service model plays well to the increasing popularity of cycling,” he said. “The question then becomes are the economics favourable enough for a franchisee? How much volume does a franchisee need to make the business viable?

“The entrepreneurs will have to check in regularly with the franchisees to ensure they are making money and having a good experience because their growth depends on the strength of the franchisee network.

“I think they should focus on scaling in Canada before expanding into the U.S. to make sure the model works.”

1
Don't mess it up! As warm weekend looms, cyclists reminded to ride responsibly
2
Could our Tour de France on Zwift April Fools joke become a reality?
3
Ribble releases Endurance Ti Disc road bike
4
Cycling dos and don'ts in a time of pandemic – how to be a responsible cyclist
5
Winner announced for Shimano cycling kit competition!
6
Campaigners call for reversal of Richmond Park cycling ban – and so does Jeremy Vine
7
“This does not constitute your daily exercise,” police tell cyclist stopped on M60
8
Factor updates O2 road bike