The Copenhagen Wheel, designed to transform a standard bike into a ‘smart electric hybrid’, is nearing commercial production, according to the company behind it. Superpedestrian say they will be starting user tests on production units in December with delivery of the final product beginning in the spring.

We first told you about the Copenhagen wheel way, way back in 2009. The wheel contains a motor, batteries, sensors and a control system, and it offers wireless connectivity. It is designed to fit easily on an everyday bike and the designers say that it learns how you pedal and multiplies your power from three to 10 times. You don’t have a throttle; instead, the wheel measures your effort and boosts your power accordingly. Pedal harder and the wheel provides increased power. You can alter the level of power assistance you are given via a smartphone app. Whenever you brake or go downhill, the wheel takes energy and stores it in the lithium battery for use later.

Many people have place pre-orders for the wheel and have been waiting for the finished product to arrive, some seemingly getting fed up with the delay. Now Superpedestrian, based in Massachusetts, USA, have posted a product development update on YouTube.

In it, Assaf Bidderman, founder of Superpedestrian and one of the wheel’s designers, says  the company is very happy with the first units of its production-level designs.

“The wheel has a powerful new drivetrain, a new powertrain and a new control system that is distributed between six boards, each in charge of a different task,” says Bidderman.

“It also has a novel torque sensing technology that is lighter, more compact and more precise so the wheel can respond to a rider’s pedalling very naturally.

“We’ve redesigned the housing of the wheel using exotic alloys instead of aluminium, allowing us to retain structural integrity while reducing the weight of the shell.” 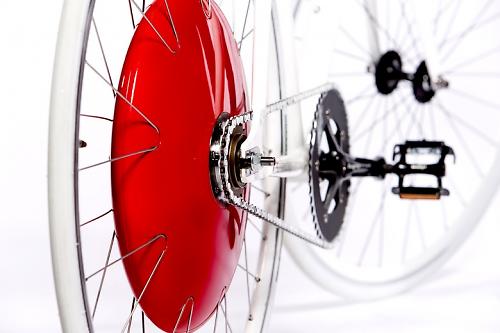 Superpedestrian are currently subjecting the wheel to extensive testing with user tests on production units set to begin next month. The plan is for further testing and certification to continue in the new year with delivery of the final product in the spring.

“The wheel is now lighter, more powerful, and operates more smoothly than any bicycle propulsion system ever made,” says Bidderman.

Superpedestrian say they have developed multiple software systems to work with the Copenhagen Wheel, allowing you to control the wheel – even lock it – and check out statistics from your ride, including your power output. They also hope that other software engineers will develop further apps for use with the wheel.

The wheel received a Red Dot design concept award earlier in the year.

Superpedestrian say that the 700c/26in wheel has a range of up to 31miles and the battery life is good for 1,000 cycles. It takes around 4hrs to charge.

For more info go to www.superpedestrian.com