Hundreds of cyclists, pedestrians and other road users will make their way along the entire length of Oxford Street next Saturday accompanied by a horse-drawn hearse bearing an empty coffin in a protest billed as “The National Funeral for the Unknown Victim of Traffic Violence.”

The march, which begins at Bedford Square in Bloomsbury and concludes with a mass die-in at Marble Arch, is being co-ordinated by the campaign group Stop Killing Cyclists and its off-shoot, Stop The Killing.

Stop Killing Cyclists was set up in November last year after six bike riders lost their lives in London within the space of a fortnight, and has staged a number of die-ins and protests at various locations in London over the past 12 months.

Protesters will gather on Saturday in Bedford Square from 12 noon, with the procession setting off at 1pm. It is scheduled to arrive at Marble Arch at 2pm, with those joining in encouraged to bring white wreaths, the laying of which will be followed by the die-in and a rally.

The event comes a day before Sunday’s World Day of Remembrance for Road Traffic Victims, launched in 1993 by the UK-based charity RoadPeace and now commemorated around the world.

“This horrifically equates to the combined populations of Birmingham, Glasgow, Manchester and Cardiff!!

“This symbolic protest funeral and mega die-in is an urgent clarion call to end this carnage and environmental destruction.”

Posters and flyers, shown below, have been distributed across the capital for Saturday’s event and you can find out more information on its Facebook page. 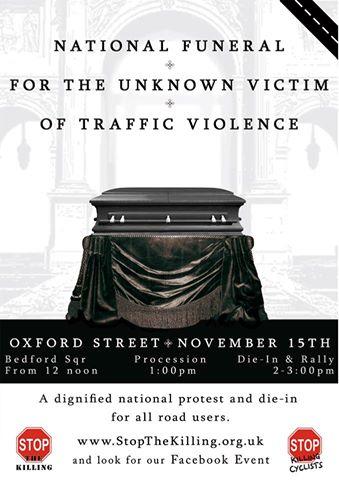 Stop The Killing and Stop Killing Cyclists have also outlined ten demands they will be calling for at Saturday’s protest:
1. STOP KILLING CHILDREN – Set up national multi-billion pound programme to convert residential communities across Britain into living-street Home Zones to abolish dangerous rat-runs.

2. STOP KILLING PEDESTRIANS – Establish a national programme to fund pedestrianisation of our city and town centres, including the nation’s high-street – Oxford Street.

3. STOP KILLING PENSIONERS – From excessive speed – introduce and enforce speed limit of 20 mph on all urban roads, 40 mph on rural roads/lanes and 60 mph on all other trunk roads.

4. STOP KILLING CYCLISTS – Invest £15 billion in a National Segregated Cycle Network over the next 5 years.

5. STOP KILLINGS BY HGVs – Ban trucks with blind spots by making safety equipment mandatory and strictly enforce current truck-safety regulations to reduce levels of illegally dangerous trucks down from estimated 30% to less than 1%.

6. STOP KILLINGS WITHOUT LIABILITY – Introduce a presumed civil liability law on behalf of vehicular traffic when they kill or seriously injure vulnerable road-users, where there is no evidence blaming the victim.

7. STOP KLLING WITH POLLUTION – Stop the Killing from Lung, Heart and other Diseases caused by vehicular pollutants - make it mandatory for particulate filters that meet latest EU emission standards to be fitted to all existing buses, lorries and taxis.

9. STOP KILLING WITH CO2 – Stop the Killing from CO2 emissions from impacts of the climate crisis - all transport fuels to be from environmentally-sustainable renewable sources within 10 years.

10. STREETS FIT FOR HUMANS! – Focus on Life! Transport governance must make safety and quality of life the top priority. Reform all council transport departments, the Department of Transport and Transport for London into Cycling, Walking and Transport Departments with formal pedestrian and cyclist representation.