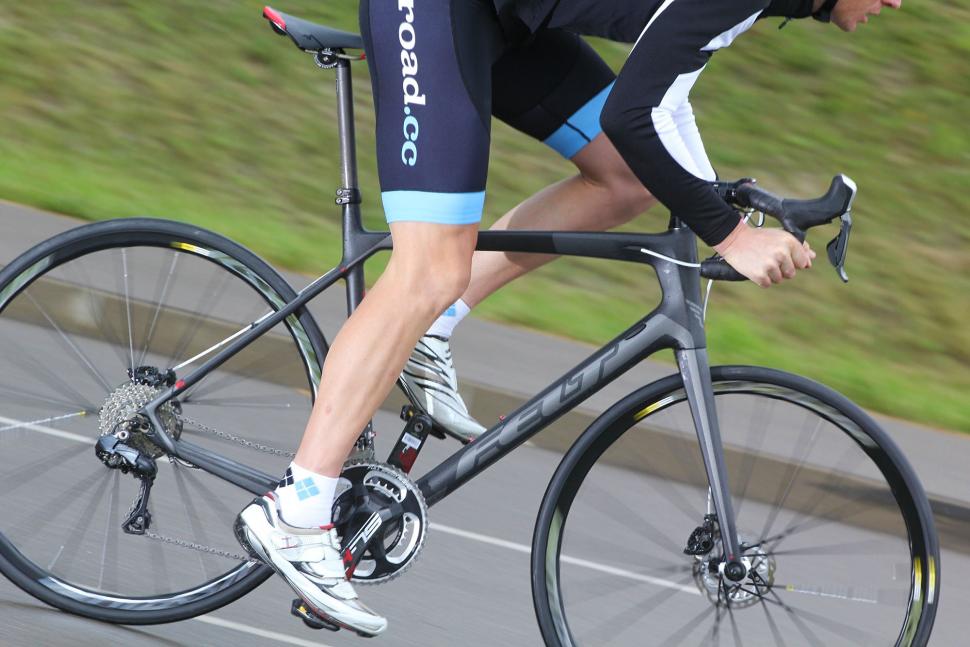 Felt have included disc brake models in their Z range of endurance road bikes for the first time in 2015 and we’ve had the chance to take the top-level offering, the Z2 Disc, for a spin. Felt’s Z Series bikes are designed for endurance riding: sportives, big weekend rides, that sort of thing. You know the style by now. The Z bikes have a shorter top tube than Felt’s F Series race bikes, and a taller head tube, putting you in a position that’s going to put less strain on your back when you’re riding all day long, and a longer wheelbase that’s designed to provide more stability. Most of the other big manufacturers have an equivalent series. Specialized have the Roubaixs, Merida have the Rides, and so on. 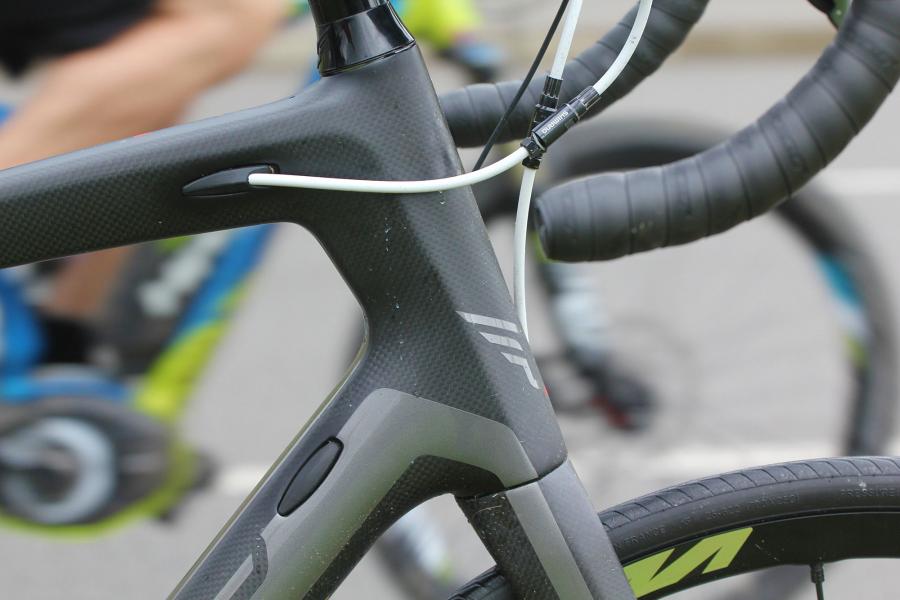 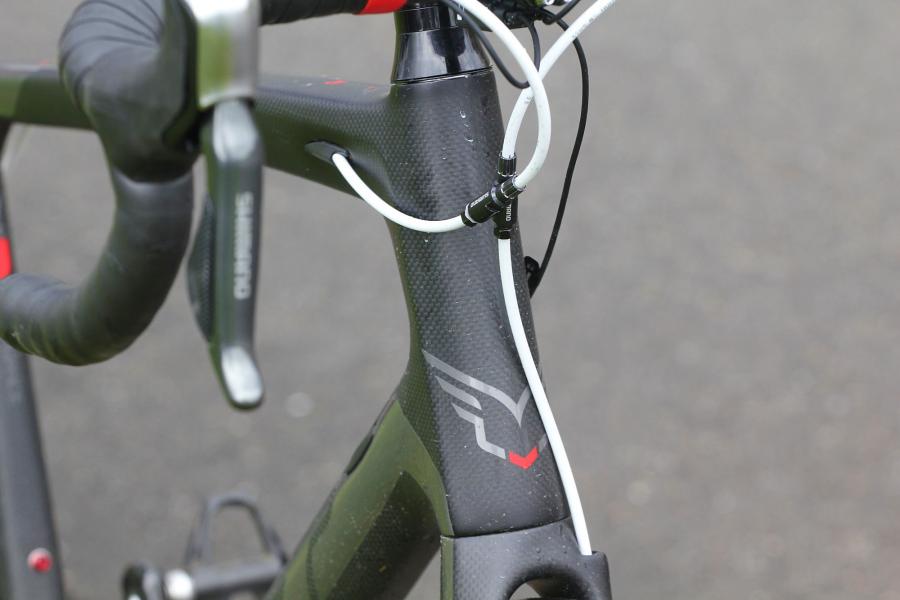 2015 is the first product year that Felt have added disc brakes to the Z Series. With disc brakes being illegal in UCI sanctioned competition on the road, manufacturers have been reluctant to add them to their full-on race bikes, so it’s in the endurance sector that the new breed of road discs have the biggest presence at the moment.

If you’re not into discs, don’t worry, there are still plenty of Z bikes with rim brakes ranging from the aluminium Z100 (£579) right up to the Shimano Ultegra-equipped Z3 (£1,999). There’s the ZW Series for women too.

The first of the three disc models is the £999 Z75 Disc, built around an aluminium frame with Shimano 105 shifters and derailleurs and TRP’s cable actuated Spyre brakes.

The middle disc model is the £2,099 Z4 Disc, which comes with a carbon-fibre frame and fork, SRAM Rival shifters, mechs and brakes. Then there’s the Z2 Disc, the one that we have here, which, at £4,699, is the most expensive bike in the Z Series by a margin. It’s double the price of anything else in the range. What do you get for your money? The Z2 Disc is built around a carbon-fibre monocoque frame – it’s carbon fibre right down to the dropouts – with a BB30 bottom bracket (they’ve used BB386 reducers and chainset) and internal cable routing. The front brake hose actually makes the journey from the handlebar to the fork crown externally, but it then heads inside before emerging again at the brake unit. 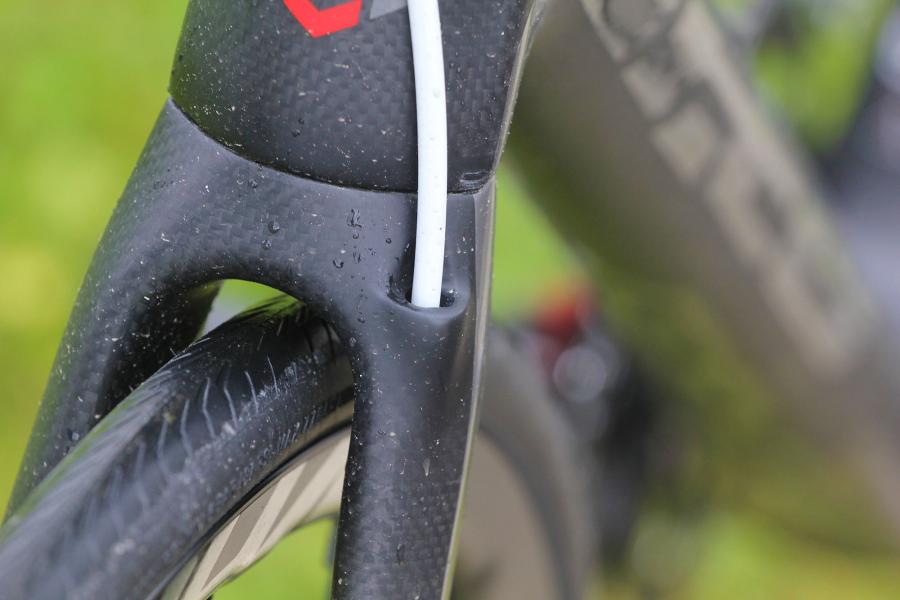 Rather than positioning the rear brake within the rear triangle like most other manufacturers, Felt have put it on the back of the seatstay, and they've gone for an IS (International Standard) mount rather than post mount, again bucking the trend. It’ll be interesting to see how that positioning thing plays out: whether all the manufacturers eventually move to one way of doing things, or whether we’ll still see different bikes with different setups in years to come. 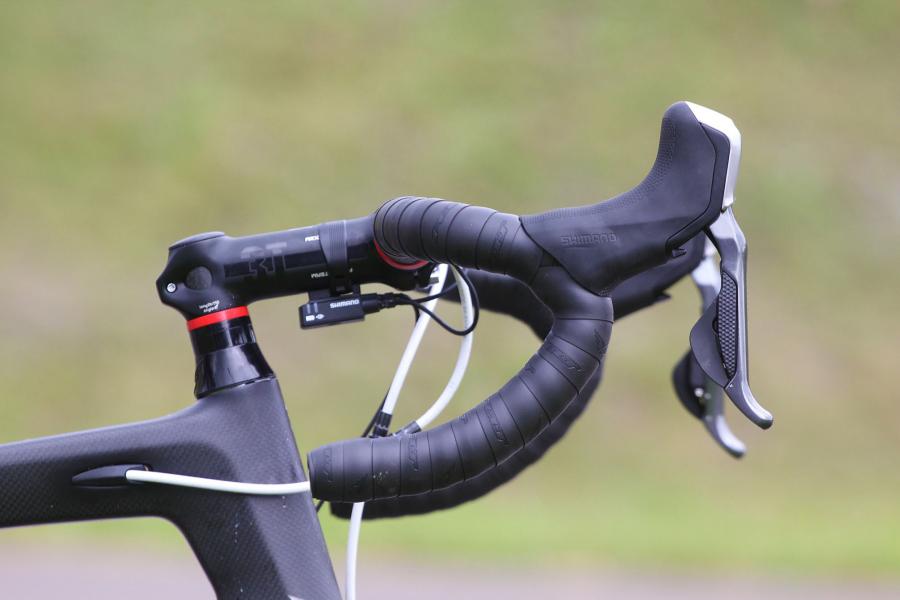 The Z2 Disc is built up with Shimano Ultegra Di2 (electronic) derailleurs, and Shimano’s R785 Di2 hydraulic shifters and brakes. The hydraulic reservoirs sits inside the shifters, in the space left by the absence of mechanical internals, so they’re not massively oversized. 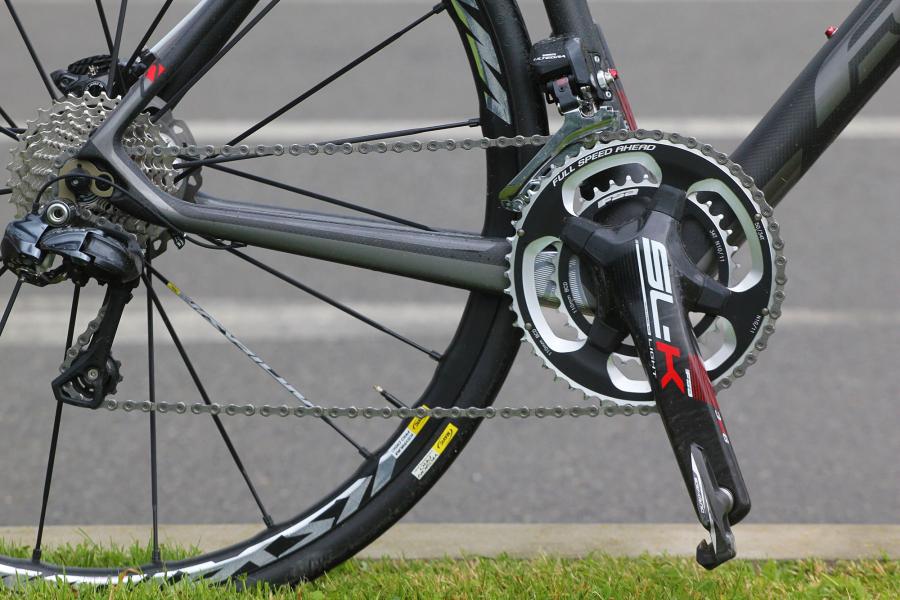 The rest of the build is solid, trusted branded kit too. You get the new version of FSA’s SL-K chainset, for example, that’s a five-bolt design with the fifth bolt hidden behind the crank arm – which FSA first introduced in their top-level K-Force chainset. The saddle is a Prologo Scratch 2 TiRox while the stem and seatpost are all from 3T. The handlebar is from 3T too, a carbon-fibre Ergosum Team Stealth bar that comes with quite a short reach and drop – 77mm and 123mm respectively – which fits with the relaxed geometry of the frame.

I had a limited amount of time on board the Z2 Disc; by no means long enough to offer a great insight into the nuances of its ride, but just about long enough for a few initial thoughts. This bike has plenty of impressive tech features but the biggest single thing you notice as soon as you climb aboard is the ride position that I mentioned earlier. With a fairly lengthy head tube and a tall conical headset spacer, the bars are set pretty high. As usual, you get some scope for adjustment there but a relaxed position is pretty much in this bike’s DNA. Whether it’s right for you will come down to your individual flexibility and taste.

Although it’s not for me, personally, some people love the more relaxed geometry of a bike like this, and it might be perfect for you. I always struggle to boss the bike around when riding out of the saddle when the front end is this tall, but the flip side to that is a less extreme than normal seated position – and you’ll spend a whole lot more time seated than standing on the pedals. 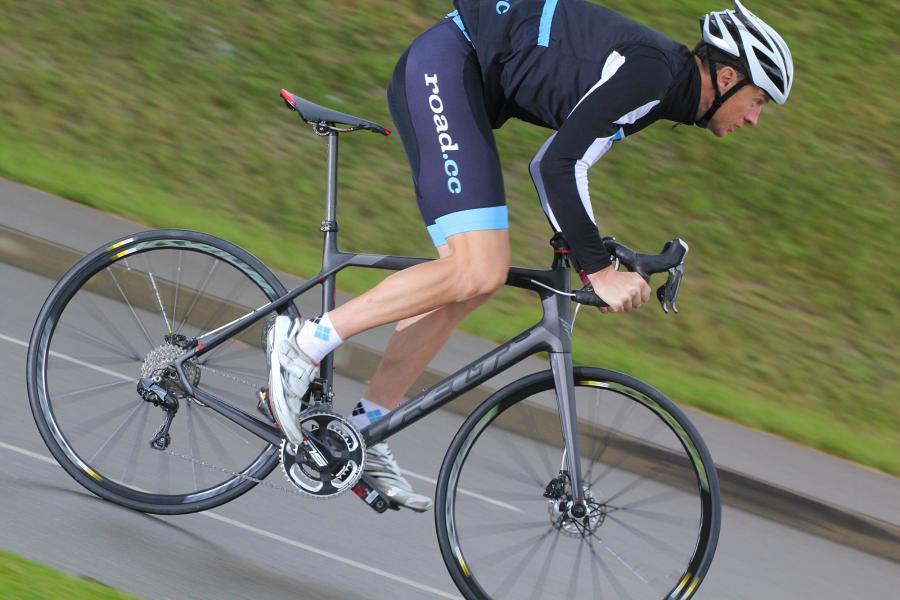 It just so happened that our ride was in the rain, and that’s when disc brakes have their greatest advantage over rim brakes. We all know what it’s like using rim brakes in wet conditions. It sometimes takes a few wheel revolutions before the braking actually kicks in. Disc brakes, situated much further from the road surface, are far more consistent and these Shimano ones performed well in the rain, acres of modulation making locking up just a very remote possibility.

None of that tells you a great deal about the character of the frame and fork, but we’d need a few longer rides to get stuck into that.

If this is a bike that interests you, check out the full range at www.feltbicycles.com or visit Felt’s UK distributor, Saddleback.