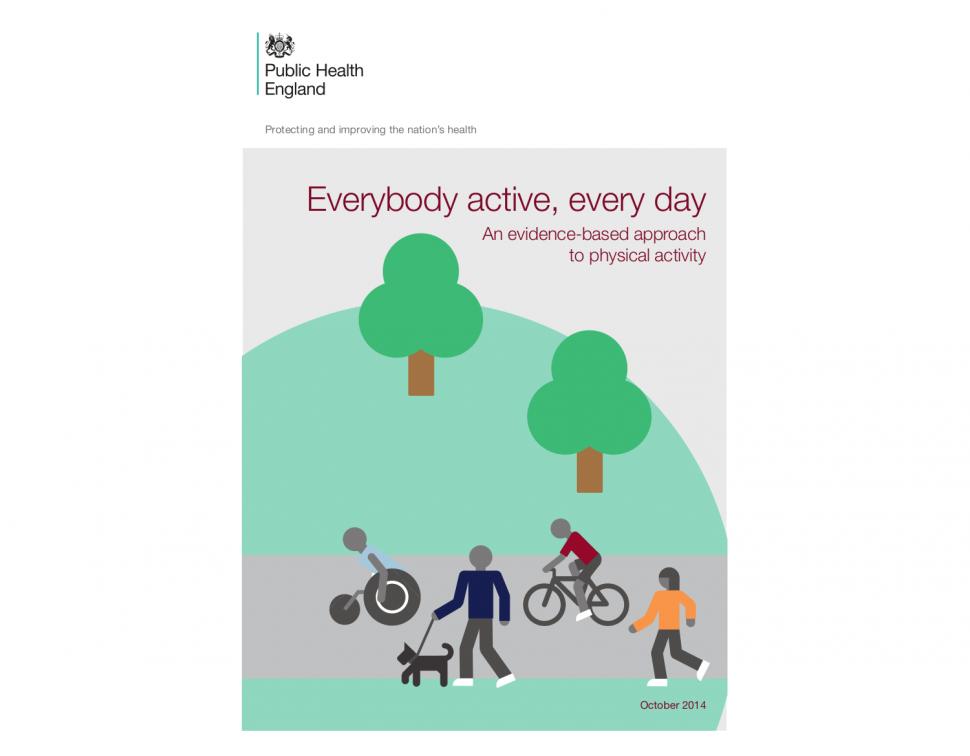 "Epidemic of inactivity" costs £7.6billion per year...
by John Stevenson

Public Health England yesterday launched 'Everybody active, every day', an initiative to improve the nation's health through physical activity — and getting people cycling is a major part of the organisation's recommendations.

An arm of the Department of Health, Public Health England's mission is to improve the nation's health, and what better way to do that than to encourage people to be active.

PHE says the country is suffering from a physical inactivity epidemic that's responsible for 1 in 6 deaths and costs an estimated £7.4 billion a year. A staggering 45 percent of women and 33 percent of men are not active enough to maintain good health, it says. Over one in four women and one in five men do less than 30 minutes of physical activity a week, so are classified as ‘inactive’.

Lack of physical activity can help guard against cancer and diabetes, and conditions like obesity, hypertension and depression.

Creating attractive environments for cycling is high on PHE's list of five steps  local areas should take to support change.

The organisation has looked at what works to keep people active in other countries. The variation in activity levels across is striking: 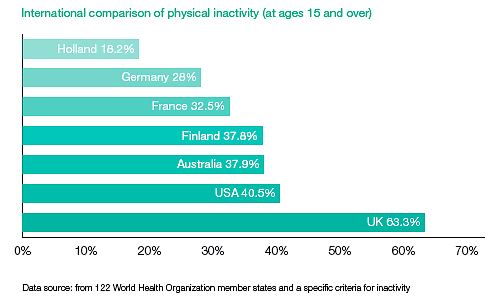 It's no coincidence that the two countries with the best activity levels also have high rates of cycling, facilitated by cycling-friendly infrastructure.

Everybody active, every day recognises this, taking what PHE terms an evidence-based approach, that is, making recommendations on what has been shown to work elsewhere. That includes making it easier to walk and cycle as everyday transport.

Pedestrians, cyclists, and users of other modes of transport that involve physical activity need the highest priority when developing or maintaining streets and roads. This can mean re-allocation of road space to support walking and cycling; restricting motor vehicle access; introducing road-user charging and traffic-calming schemes; and creating create safe routes to schools.

Such changes have prompted substantial shifts from car transport to walking and cycling.

Increasing active travel will require inout and cooperation from many areas. One group NHE identifies as key are transport planners whose training it recommends should be reviewed "to ensure a consistently high standard of provision of walking and cycling infrastructure on the strategic and local road network".

Cycling charity CTC has expressed enthusiastic support for the PHE recommendations. Sam Jones, CTC's campaigns coordinator, said: “PHE’s latest framework reinforces what CTC has long campaigned for: joined up thinking on cycling provision and encouragement, across both national and local government, is absolutely crucial for getting people of all ages, backgrounds and abilities cycling.

“With health costs rising due to increasingly sedentary life styles, getting more people cycling is an easy win. If we increased cycling to German levels by 2025, as recommended by the Get Britain Cycling report, CTC led research calculates the NHS could benefit by £6bn annually. PHE recognises these benefits – and it is our hope that the Chancellor will too and make funding for cycling part of his Autumn Statement on December 3.”

The two parts of the report can be downloaded from Public Health England.