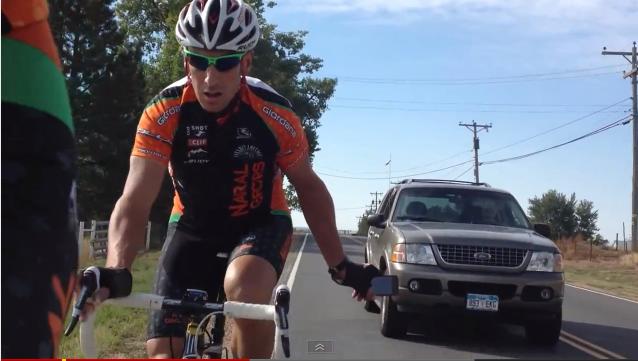 Fines and prison sentences could be imposed
by Alex Bowden

Kansas City Council has approved a measure which prohibits people from intimidating cyclists and pedestrians. The ordinance covers threats, thrown objects, the swerving of a vehicle in a person’s direction and anyone found guilty of such an act could face fines or a six-month prison sentence

The move follows similar legislation in California – in Los Angeles and Berkeley. However, whereas in those two cities harassment of cyclists is a civil offence, in Kansas City it is a crime. The move was felt necessary following testimony from joggers, cyclists, those in wheelchairs and others. Speaking to fox4kc.com, councilman John Sharp summarised what he’d heard.

In Sharp’s words, the aim is ‘to get people to realise that cyclists have the same rights to use the streets as motorists’.

A recent Australian study blamed hostile media coverage for increased harassment of cyclists with a 2009 TV sketch and a 2012 road rage incident involving ex-cricketer Shane Warne highlighted as being examples of this. The research also found that more than 90 per cent of near-collisions between cyclists and vehicles were the fault of the driver involved.

The Kansas City ordinance will at least provide pedestrians and cyclists with a potential course of action should they suffer intimidation of some form. As local cyclist, Adam Orr, observes:

“I’ve always said I wish I had a rocket pack on the back of my bike to catch up to them and let them know what I thought about it, but now it’s great, you just get their licence [plate number] and turn them in.”

However, the ordinance stops short of outlawing crude comments, attempting to balance protection of cyclists with the right to free speech. Or, as city attorney Bill Geary told the council at one discussion of the ordinance:

“We’re not going to pass any law that unjerkifies someone who wants to be a jerk. Yelling crude things at people is part of living in America.”