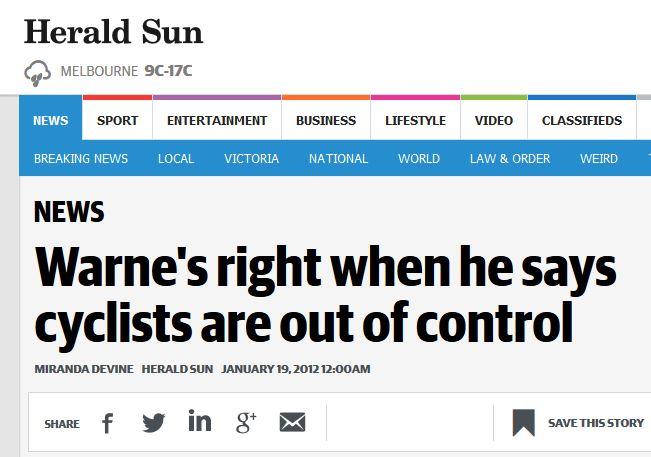 Researchers also find that more than 9 in 10 near-collisions between cyclists and vehicles are driver's fault ...
by Simon_MacMichael

Cyclists taking part in a study in Australia which used helmet camera footage to analyse the interaction between bike riders and motorists say hostile media coverage has led to them receiving more harassment from drivers. Specifically cited are a satirical TV sketch show that advocated violence against cyclists, and a 2012 road rage incident  involving former cricketer Shane Warne.

Researchers also found that more than nine in ten close misses between motor vehicles and cyclists were the driver’s fault. In around two in three of those incidents, a collision was avoided due to the bike rider taking evasive action.

The study, entitled Naturalistic cycling study: identifying risk factors for cyclists in the Australian Capital Territory was conducted by a team of academics from Monash University Accident Research Centre in Victoria.

One cyclist participating in the study revealed that he had been harassed three times on a single ride in the days after a sketch on the satirical TV show Good News Week aired in October 2009, advocated violence against cyclists.

The segment, featuring comedians Magda Szubanski and Julia Morris, was interpreted by many of those who took part in the study as not being humorous in tone, instead conveying feelings of frustration towards cyclists and even advocating aggression towards them.

Szubanski closed the sequence by suggesting motorists should open their car doors as cyclists approached, and while both she and Morris – who advocated, “just drive and take ‘em out” – later apologised, study participants noted greater aggression from drivers in the days after the sketch was shown.

The January 2012 incident involving Warne was also reported to have led to a temporary rise in harassment of cyclists. A bike rider claimed that Warne, who was driving home from Melbourne Cricket Ground, had deliberately driven into the back of him.

In response, Warne, as well as then fiancée Liz Hurley, took to Twitter to attack cyclists, with their comments reported widely in the mainstream media both in Australia and abroad.

The following day, an opinion piece in Melbourne newspaper The Herald Sun appeared under the title, “Warne's right when he says cyclists are out of control.” It began: “Shane Warne has declared a jihad against cyclists – and most motorists are with him.”

One woman who participated in the study said: “When we had the Shane Warne incident in Melbourne, for about 2 or 3 weeks I copped so much abuse on the road but after that it’s toned down. So I think that [driver abuse] peaks with those incidents.”

The study said: “With the 24 hour news cycle, growing number of online media outlets and social media platforms there is an increasing space for people to voice their opinions about any subject, including cycling.”

It added: “Some cyclists considered the public attack on cyclists gave drivers permissions to be more aggressive,” and recommended that “a broad review of the role of the media in the public perception of cyclists and the relationship between cyclists and drivers on the road [which] was outside the scope of this study … be conducted to inform actions to ensure that public discussions about any specific road user group do not lead to increased risk.”

Through footage from helmet cameras fitted with a GPS data logger, responses to a survey and in-depth exit interviews, researchers aimed to analyse the interaction between bike riders and motorists to highlight ways in which the safety of cyclists could be improved.

Motorists to blame for more than 9 in 10 near-collisions

While no actual collisions were recorded, researchers did identify 91 “potentially unsafe cyclist interactions,” the vast majority – 93.4 per cent – caused by a motorist. In most of those, it was the evasive action of the cyclist that prevented a crash.

In 64.8 per cent of incidents that could have caused a collision, it was avoided because the cyclist braked – typically, in circumstances where the motorist had cut across the rider without adequately signalling their intention to turn.

The findings in ACT largely reflect those of a similar study previously conducted in Victoria’s capital, Melbourne, where 87 per cent of incidents were attributed to driver behaviour.

The authors of the study made a number of recommendations to the NRMA-ACT Road Safety Trust, which funded the research.

Those include greater education of motorists about cycle safety issues, including through driving tests, bringing in a minimum passing distance, and developing cyclist awareness and anti-bullying campaigns targeting aggressive behaviour on the part of drivers.