New options for keeping you safe in the winter, plus updates to Cateye’s range of bike computers
by Mat Brett

Cateye and Blackburn have both released new lights that we had the chance to check out yesterday.

Cateye’s Volt 700 front light (main pic, £99.99) is one of the lights we have in for review here at road.cc and we’ve included it in our comparison engine.

It’s a similar design to the existing Volt 300 but with extra power. Cateye say it’s 700 lumens if you run it in constant mode, hence the figure in the model name, and over 800 lumens in daytime flash mode. The Volt 700, which weighs 140g, is USB rechargeable with a run time of about 2hrs on its highest power and up to 100hrs in flash mode. You can carry a spare Li-ion battery cartridge to extend the run time. 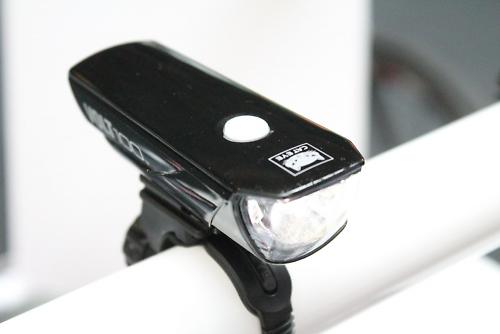 The Volt 100 (£29.99) is new too, and it’s another light we have in our comparison engine. Cateye claim it offers 100 lumens in high constant mode and 150 lumens when it’s flashing. Rather than being a light to show the way on unlit roads, this is one that’s designed to get you seen in urban environments.

Again it’s USB rechargeable and it’s powered by a Li-ion battery. It weighs just 65g and Cateye claim run times of 2 – 30hrs, depending on the mode you’re using. The Cateye Rapid X2 (£44.99) is an updated version of the Rapid X rear light with a beefed up LED and Li-polymer battery that provide a claimed 50 lumen output. It’s USB rechargeable, has a run time of 1 – 30hrs, depending on the mode, and is priced at £44.99. As the name suggests, the Rapid Mini is really mini, weighing in at just 31g. Yet again, it’s USB rechargeable, which really is the way forward for most people these days. It has a claimed output of just 15 lumens so it’s not nearly as powerful as the Rapid X2, but it has run times of 2 – 30hrs and it costs £24.99. In non-light news, Catyere are offering coloured versions of their Padrone bike computer in limited runs. As well as this orange, there’s pink, blue and green, priced at £49.99. Cateye have also updated their Stealth computers. The Stealth Evo+ (£99.99), for example, now comes with on-board altitude along with current/maximum/average speed, heart rate and cadence and left/right power balance. Blackburn have a bunch of inexpensive new lights too, including the Local 75 front light (£19.99). The 75 refers to the claimed lumens on the high constant mode. It runs on three AA batteries (included). Blackburn’s Central lights are built with extruded alloy shells and they’re USB rechargeable. The Central 100 front light (£29.99) offers – you guessed it – a claimed 100 lumens on its higher constant mode and a run time of 3.2hrs (longer in low and flashing modes).

For more info go to www.zyro.co.uk.