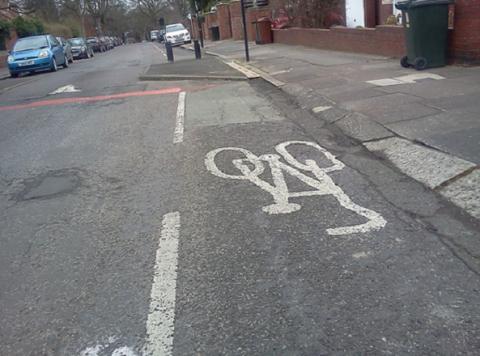 Newcastle cycling campaign group newcycling.org says the city’s council is “clueless” over infrastructure for cyclists after it emerged that a cycle lane has been removed there, the third time they say that has happened since 2010.

A report from Newcastle City Council’s head of highways and local services recommends its regulatory and appeals sub-committee to next week approve a parking permit scheme for Jesmond Park West.

The plans include removing a cycle lane, and follows earlier removal of cycle-specific infrastructure on Silver Lonnen in 2010, and Elswick Road two years later.

In a consultation held earlier this year, newcycling.org’s chair, Katja Leyendecker, opposed the removal of the cycle lane, and also expressed concerns over commuters parking on the southern part of Jesmond Park West, as well as a potential increase in ‘rat-running’ motorists.

In response to her comments, the council report says: “The existing cycle lanes provided on Jesmond Park West are advisory only and are often blocked by parked vehicles.

“We consider that this scheme, which will remove the all day commuter parking, will assist cycles using this quieter route as less vehicles will inevitably be parked on street here as a result.”

But in a press release from newcycling.org, Ms Leyendecker said: “This is almost unbearable to watch how the council is still unable to support sustainable travel options to schools.

“For example, we are asking them to design in some safe space for cycling for the school run on Tankerville Terrace in Jesmond and they push us back again and again with their excuses.

“Now they are wiping out an existing cycle lane on Jesmond Park West that was put there to enable cycling to Heaton Manor School.

“The cycle lane was far from ideal - even comical in places [as illustrated by the picture above] – but should be improved rather than demolished.”

She called on council departments to work alongside each other rather than concentrating on their own remits.

“What needs demolishing is council silos, not cycle infrastructure,” she urged, setting out what she termed “another option.”

Ms Leyendecker, who urged council chief executive Pat Ritchie to take charge of the issue, explained: “We have asked council’s transport planners to co-operate with their engineering colleagues.

“These two departments have to start rubbing their heads together. Engineers keep doing their little spot improvements completely in isolation of the surrounding road network.

“It’s their traffic planning colleagues therefore who should step in and help to look at the whole of the neighbourhood traffic flows including the usability of walking and cycling infrastructure.

“The council must start to see the bigger picture and look at the full network when carrying out their so called road ‘improvements’,” she added.

Ms Leyendecker concluded: “They seem clueless, or at least that’s what it looks like from the outside looking in.”