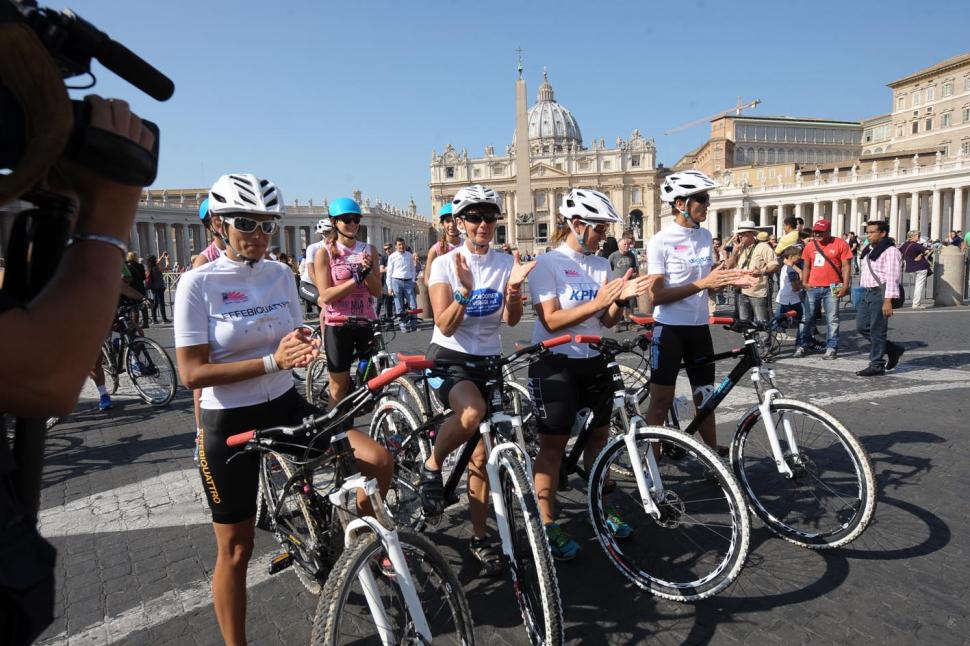 Pope Francis has been delivered a new bike by four women who either work with cancer patients or have been affected by the disease themselves. The quartet rode 800 kilometres from Monza, near Milan to Rome along a medieval pilgrimage route with a bicycle specially made for the Pope by Italian bike maker, Atala.

The white bike carries a dedication to the Pope in blue lettering, and according to the company’s managing director, Massimo Panzeri “is a men’s city bike of the latest generation, with a Bosch motor that allows pedal assistance.” 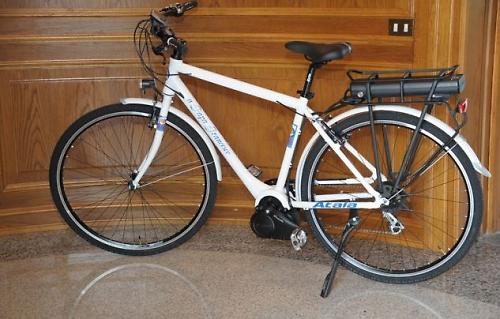 The bike was delivered to the Pope at the Vatican yesterday after the end of a ride that had seen the quartet of women – Cecilia Cantoni, Elisa Bonaccorsi, Marisa Giovenzana and Tiziana Gurini, who were accompanied by three male cyclists – follow the route of the Via Francigena, which pilgrims coming from the north used to reach Rome during the Middle Ages.

During his weekly address delivered from a balcony overlooking St Peter’s Square, the Pope acknowledged the “pilgrims” who had made the journey by bike in the fourth annual edition of the ride, called Santiago in Rosa.

It was organised by the cancer charity Cancro Primo Aiuto, and aimed to raise funds to buy new equipment and support existing programmes at a specialist breast cancer unit at the Luigi Sacco hospital in Milan.

Speaking of Altala’s support of the organisation, Panzeri said: “I came across the charity’s activities by chance and for four years we have been ‘wedded’ to their cause; our aim isn’t to gain publicity but to raise awareness of the activities carried out by Cancro Primo Aiuto and the social programmes they carry out for the sick.

“The charity’s work is solid; they undertake very ambitious projects but always to help and improve the lives of cancer patients,” he added.

It’s not the first electric bike that the Pope has been given this year. In July, he was given a Smart bike by Daimler, presented to him at the same time as the Vatican took delivery of the new Popemobile.

Since being elected Pontiff in March last year, Pope Francis has sought to distance himself from the more ostentatious trappings of power that come with his position, living as simply as he can and driving around Rome in a 30-year-old Renault 4 given to him by a French village priest.

In July last year, he told novice nuns and trainee priests that if they needed a car to get around, to choose a humble model, not a flashy one.

“I’m telling you, truly, it hurts me when I see a priest or a sister with a brand new car. But you can’t, you can’t!” he said.

“Now, you’re thinking, ‘but then, father, must we go by bike?’” he said.  “Bikes are nice. Monsignor Alfred [his private secretary] goes by bike, he does it.”

It’s unlikely he would have been impressed by the gold-plated Colnago once given to Pope John Paul II by Ernesto Colnago, although we were pretty taken with its sister bike when we stumbled across it while chasing the Giro d’Italia across northern Italy in 2011.

1
“Absolutely vile” – Cyclist slams Staffordshire Police after it tells him no prosecution of drivers based on video footage if no injury or damage involved
2
Fake cop stops cyclist and demands to see his ‘licence’ to ride in bike lane
3
"We know who you are" – poster addressed to bike thief gets bike returned to owner
4
Online troll who abused Labour MP over low traffic neighbourhoods sentenced
5
Government tells councils it won’t fund painted cycle lanes
6
Near Miss of the Day 600: Caught on home CCTV edition
7
'Bike storming' and skateboarding youths welcome in City of London, suggests new police report responding to anti-social behaviour complaints
8
Updated: Petition calling for public awareness campaign to address driver aggression towards cyclists hits 10,000 signatures