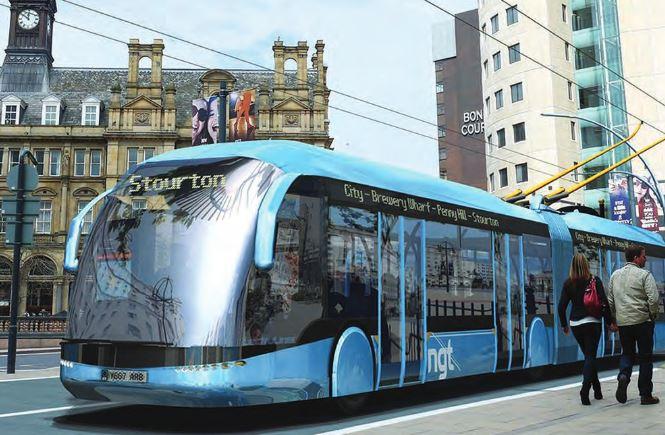 Leeds Cycling Campaign says that a planned trolleybus system in the West Yorkshire misses “a huge opportunity” to underpin local authorities’ commitments to bring about a “step-change” in provision for cyclists, and will also hamper growth of cycling and walking there.

In a statement issued yesterday to a public inquiry into the £250 million New Generation Transport (NGT) scheme, promoted by Leeds City Council and the West Yorkshire Combined Authority, the cycling campaign group said the initiative would do “little to improve the situation for cycling and walking, particularly as the scheme would travel along the most-cycled route in Leeds.”

The planned route would link Holt Park in the north of the city that this year hosted the Grand Depart of the Tour de France with Stourton in the south, and would also go through congested areas including Hyde Park and Headingley, reports the Yorkshire Evening Post.

According to Leeds Cycling Campaign’s submission to the public inquiry, which is due to finish at the end of next month and which will help determine whether the scheme gets the go-ahead from the government, “the assumptions underpinning NGT are unduly favourable to unsustainable and inefficient modes of transport while ignoring the potential of walking and cycling.”

The campaign group adds that “NGT while overall slightly beneficial for cycling misses a huge opportunity to support the step-change in cycling that has been promised by Leeds and West Yorkshire authorities.”

The submission to the inquiry did note, however, “The positive discussions we have had with designers and their attempts to implement better provision for cycling within the limits imposed on them.”

According to the Yorkshire Evening Post, supporters of the scheme believe it will benefit the local economy, while critics say it is a waste of money that could be better spend elsewhere.

Also objecting to the scheme is the city’s biggest bus operator, First Group, which maintains that introducing double-decker buses similar to the new-generation Routemasters deployed in London by Boris Johnson would be a better investment.

Once a common site in many cities across Britain, trolleybuses, which draw their power from overhead wires and unlike trams do not travel on rails first appeared in the UK in 1911 in Leeds and Bradford – the latter being the last place to decommission them, in 1972.

Currently, there are around 300 systems in operation in more than 40 countries worldwide, including one in San Remo in Italy, where the overhead power lines can be seen in old photographs of the former finish line of Milan-San Remo on Via Roma.