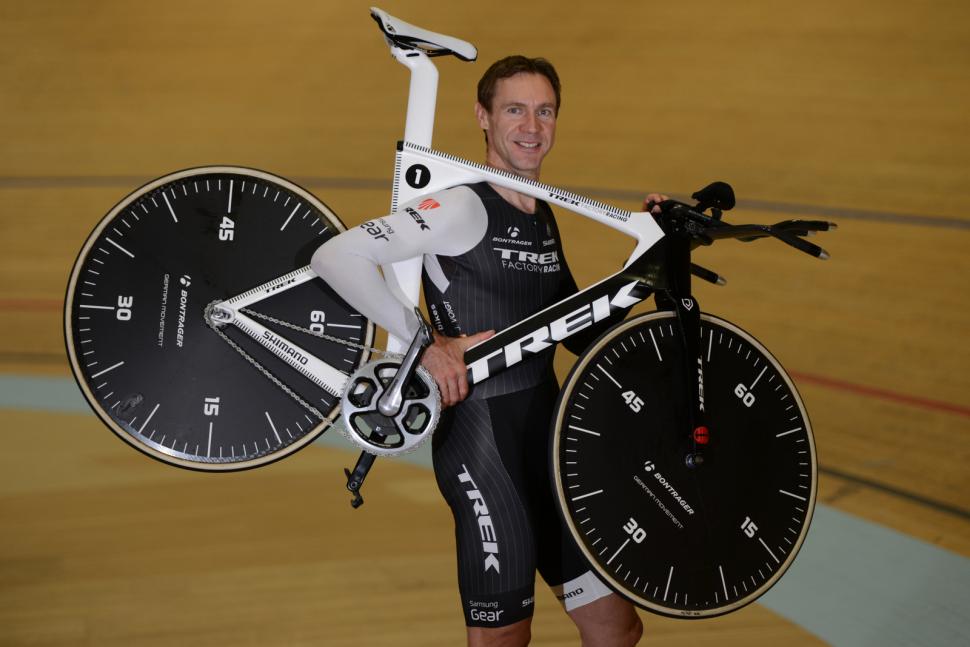 Jens Voigt smashes the Hour record in his final challenge

In the final ride of his career, and a day after his 43rd birthday, the hugely popular German rider Jens Voigt has smashed the Hour record, riding 51.115 kilometres at the Velodrome Suisse. He becomes the first man to ride more than 50 kilometres in 60 minutes since Chris Boardman travelled 56.375km using a subsequently banned bike and riding position in 1996. Voigt has also set a benchmark for others - Sir Bradley Wiggins, Fabian Cancellara and Tony Martin perhaps among them - to follow.

The Trek Factory Racing rider surpassed the existing record of 49.7 kilometres, set by Ondřej Sosenka in 2005, with a minute and a half seconds remaining. Unlike the previous record holder, Voigt could use up to date equipment following a UCI rule change earlier this year.

That should take nothing away from his achievement. It was an astonishing ride, in which his legs did what they were told and "shut up" for the last time, and one that in all probabilty will usher in a new battle for what has long been the most prestigious record in cycling.

Voigt went out quickly, and rapidly hit the sub-18 second laps he needed if the record were to be his. In the first 20 minutes or so, he was logging around 17.75 seconds per lap, well ahead of schedule, but that drifted out during the second third of his ride, though never exceeding the 18 second average.

Adjusting his position on the bike at times, and even the back of his skinsuit at one point, some might have worried that he had gone out too quickly and was going to pay the price. Such fears were groundless. During the final 20 minutes, his lap times got faster and faster, finally dropping below 17 seconds as the crowd cheered him on.

It remains for others to beat the new record, and it's certain some will have a crack. It's likely that anyone able to finish in the top ten of a time trial at the World Championships would be able to beat it, and easily.

None, though, would be as popular as Voigt, and in making him the first man to attempt it following the rule change, and moreover in the final ride of a career that has won him legions of fans, Trek have pulled off a huge marketing coup.

Next stop for Voigt is the UK - he'll be riding a sportive for charity in the New Forest on Saturday, then appearing at the Cycle Show next week. He - and his record-breaking bike - are bound to be the star attractions.

“I started as usual too fast, but that is just me I can’t control myself, and I realised that I was a second faster on the first lap than on the timetable so I tried to pace myself a little,” said Voigt afterwards. “But I was in good shape, just right.

“I am perfectly fit for this moment, I am in very good shape, and after 20 minutes I had gained one lap but I was still feeling in control.  Then from 20-40 minutes I had a comfortable lead and I paced myself and was still gaining a little time.

“Then in the last 20 I sped up a little and gained another lap.  The last 10 minutes were flat out - all-in.

“My only thoughts were to not over pace, to focus on holding the black line and to stay aero – no side thoughts. 51.1- yah I am pretty happy.

“The first 10 minutes I could not feel the pedals and thought, ‘oh this is easy!’  Then I went, ‘oooooh, maybe you’d better pace yourself a little bit here.’ Then I went on cruising speed from 20-40 mins.”

“But, he added, “I could feel at that speed I was good, I could hold on to this speed, I am not going to break down or slow down.  So I felt in control, and yes indeed I had a little bit of time to enjoy it.”

He said: “At the start I was pretty worried because I knew the time schedule and he was fast, but then I was happy when I saw him balancing. I knew that at 40 minutes it was the line where he would either increase or go down and I was super happy to see him increase.  It was really impressive to see him do this at the age of 43 – but Jens is Jens.

“It was a really nice way to finish his career with a good performance, and we gave him all our support and this is what he deserved.  I am really happy the event went well. We all watched [the Hour Record] from a computer in Spain and I can say it was inspirational, and has given us a boost for Sunday.”

At the trackside to watch Voigt’s historic ride was UCI president Brian Cookson, who said: “It’s absolutely what we thought would happen, to bring the Hour Record back to status in a new era.

“It was pointless to continue the old system, we needed to allow the technology and bring back the magic. It was wonderful! Congratulations to Jens and all the Trek Factory Racing team.”