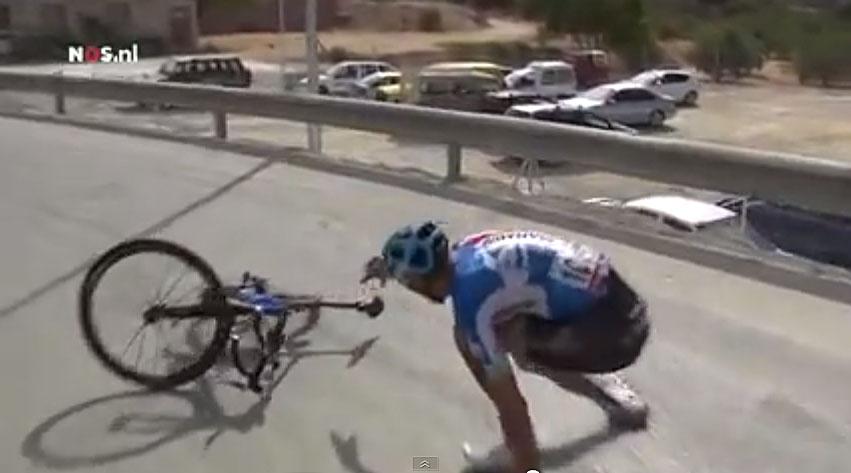 Does he have an engine tucked into his bike frame? Clue: no.
by dave atkinson

Heads up conspiracy fans! First it was Cancellara, and then Hesjedal... New video footage has come to light that proves* road riders are using cheeky motors in their down tubes to help them up the climbs! Don't believe us? the vid is below...

As you can see from the video, Hesjedal's bike continues to move after he's flung clear of it, and then the moto runs it over. That's enough for some salacious headlines, such as Dirt's Is this video proof that roadies really are the biggest cheating bastards ever?

Firstly, Hesjedal goes down on a downhill, and he's going quickly, so the bike is carrying plenty of momentum. It slides while he's still in contact with it. When he's clear the bike is still moving but most of the mass has been removed, and the only parts of the bike contacting the road are the front tyre, one shifter and the rear tyre. The front tyre starts to roll down the hill, and because the rear wheel is in angular contact with the surface it moves in an arc, turning the bike round.

Secondly, the system we're talking about is something like the Vivax Assist, which is hidden in the down tube of the bike and drives the bottom bracket. Here's a helpful video explaining how it works. and here's another one in full conspiracy mode. The main thing to note is that it's a bottom bracket system. It drives the pedals. Do Hesjedal's pedals go round? No.

Thirdly, come on. Motors in bikes? Plausible deniability? You can't claim it was a dodgy steak or an 11-pint bender.

*it doesn't really prove it