We’re used to seeing concept bikes at the big shows. Most often they’re very shiny and everyone crowds around them, and then they disappear without a trace. Canyon don’t seem to do it that way, though: their urban bike, which was a concept last year, is now in production looking pretty much the same. So when they show us a full suspension, cloud-connected road bike, we’re going to assume that it’s more or less do-able. And it’s sporting some amazing tech. It’s a full suspension platform. Obviously, we’re not talking about masses of travel but there’s a carbon leaf spring at each end; Canyon already use that tech in their VCLS seatpost.

The really clever bit is the bearing that acts as the pivot of both front and rear suspension. It's filled with a special fluid that changes viscosity when it’s subjected to a magnetic field, so the damping of the suspension can be altered electronically, all the way up to a full lockout. It’s called a magneto-rheological fluid, if you’re into that kind of thing. Canyon aren’t the first to think about using the technology: Fox have been playing about with it on their mountain bike suspension for a couple of years. 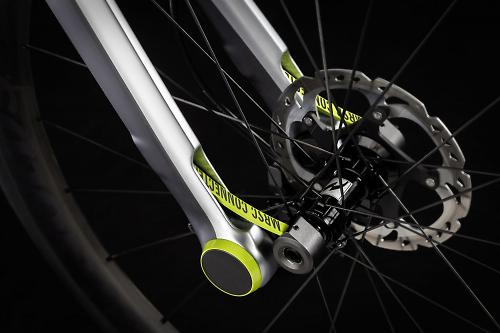 The idea here is that the suspension can respond to changes picked up by sensors on the bike. Thanks to sensors in the seat tube, the damping can be made to respond to changes in road condition, easing off on the damping when the surface is bad and firming up on good tarmac. On top of that, sensors on the contact points could also detect your position and adjust the damping accordingly. If your hands are on the drops, the bike can lock out the front and rear for a sprint. That’s not the only new development on this concept bike. The MRSC also has an on-board unit that Canyon have developed in conjunction with Deutsche Telekom. It contains an industrial SIM card that allows the bike to connect to the cloud and perform a number of functions.

First up, the bike is GPS-enabled so you can track its rides. This is obviously something that many units can do already but the always-on MRSC will keep an accurate log of all the miles the bike has done, and could come in handy if your bike gets nicked: Canyon plan to build the on-board electronics into the frame so that they’re not removable without trashing the bike. As well as that, Canyon have designed an app that syncs with the bike, and it’ll give you advice on the service life of the components. So it’ll ping you a message when the chain has done a certain number of miles, and suggest that you check it. If it needs changing, you’ll be able to order the chain directly from the app, and you’ll also be able to watch instructional videos on how to replace components.

The third function of the on-board unit is an emergency call system. If the accelerometers on the bike detect a serious crash, they’re able to put a call through to the emergency services using the on-board SIM, including precise location data from the GPS.

That’s a lot of tech shoehorned into one bike. Will we see it for sale next year? Probably not, no. There’s some questions that remain unanswered. Canyon want the bike’s on-board unit to charge itself, and right now they don’t have that sorted. The ideal scenario, they told us, would be that the power is generated by non-drivetrain forces. You could use micro-generators in the suspension or piezo elements in the frame, for example. That’s some way away from being workable at the moment, but as a concept it’s certainly an interesting indicator of the kinds of things bike companies are looking at.