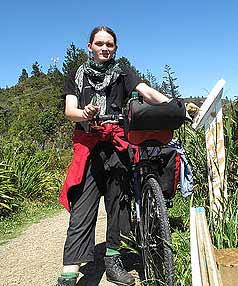 Mia Pusch, from Fulda, north-east of Frankfurt, died last Tuesday after being struck by a lorry on State Highway 3 near the town of Bulls in the country’s North Island while on an extended solo cycling trip through Australian and New Zealand.

In her final post to her blog, on 30 December, Mia had written: “When you're a cyclist on New Zealand’s roads, you’re not torn from your daydreams just by dive-bombing magpies, but frequently threatened by an even more common species: truck drivers.”

Her post went on to make a distinction between friendly motor vehicle users, typically travelling in the opposite direction, who would give her a thumbs-up and toot their horns to help make other road-users aware of the cyclist’s presence, and drivers who would overtake her leaving no more than half a metre to a metre’s space and blasting their horns impatiently as they passed.

A director of the haulage firm that owns the truck that killed Mia told The New Zealand Herald that the driver, who was experienced, had been traumatized by the fatal crash and that the company had not previously been involved in this type of incident.

But Greg Hamilton, of cycling pressure group Bike NZ, which in the last three months has gathered 15,000 signatures on a petition calling for a minimum 1.5 metre passing distance, claimed that local cyclists were only too aware of the dangers on the country’s roads, saying: "The amount of comments we have on a daily basis of near misses on New Zealand roads... it's a very clear message that it's a scary place to be."

Mr Hamilton called on the government to put money into educating drivers as part of its plans to develop a national cycleway, saying "New Zealanders are just not good at sharing the road."

Meanwhile, government minister Pansy Wong sent condolences to Mia’s family and friends, but said that she was hopeful that people planning cycle tours of New Zealand would interpret the police investigation into Mia’s death as a sign that the government was serious about road safety.

With a population of 4.2 million, cyclist fatalities in New Zealand are fairly rare – official statistics show that in the decade to 2007, fewer than ten cyclists on average were killed on the country’s roads – so a rider is killed, it tends to make the news.

Last March, another German tourist, Stephan Stoermer, was fatally injured by a lorry just one week before he was due to fly home after a three-year bike rode that took him through 26 countries, while two months earlier, Police Superintendent Steve Fitzgerald, a road safety expert, was killed when he was involved in a collision with a truck as he cycled home.