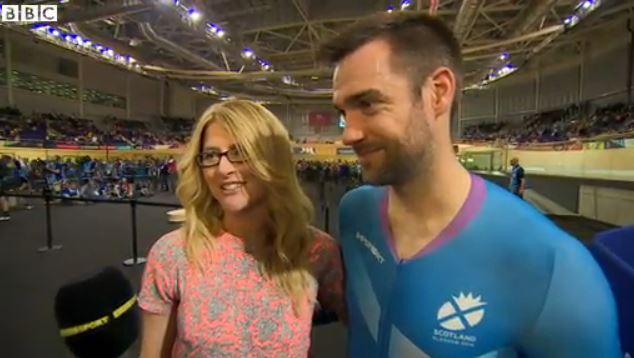 Chris Pritchard may have been eliminated in semi-final at Commonwealth Games, but he got the result he most wanted
by Simon_MacMichael

One cyclist who failed to make the final of his event still came away from Glasgow’s Sir Chris Hoy Velodrome with exactly the result he’d been dreaming of for months – Scotland’s Chris Pritchard, whose partner Amanda Ball answered ‘yes’ when he proposed to her after racing in the Keirin on Sunday.

The Sheffield-born 31-year-old clambered into the crowd to get down on one knee and pull out a ring as he popped the question.

It was all caught by the TV cameras, with BBC pundit Rob Hayles remarking to commentator Simon Brotherton, “That’s got to be better than a gold medal” as the pair embraced to the cheers of the crowd.

Afterwards, the couple spoke to the BBC’s Jill Douglas, who asked Ball whether she had seen the proposal coming.

“No,” she replied, “I was like, ‘Oh my God, why is he climbing over the bars? What is he going to do?’ But I didn’t think he was going to propose.

The TV presenter asked the cyclist how long he had been planning the surprise proposal, to which he replied, “about five or six months.”

He went on: “I couldn’t tell anybody. I didn’t want it to get out, it was top secret.”

Asked whether a ‘yes’ answer was ever in doubt, his new fiancée responded, “No, I’ve been nagging him long enough!”

It’s not the first time a velodrome has hosted a post-race proposal – in 2011, Garmin-Sharp rider Johan Vansummeren proposed to his partner – now his wife – after she had run across hug to him seconds after his victory in Paris-Roubaix.