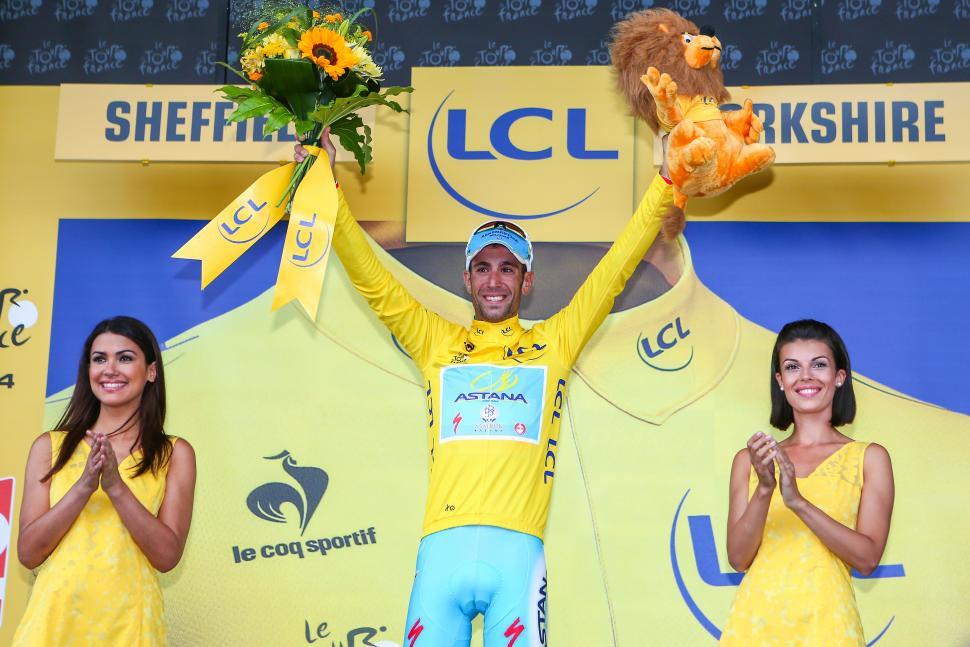 Yorkshire vs France, Nibali vs toughest first week in decades... who came out on top?
by Simon_MacMichael

With a much-needed rest day following what have been a frantic and dramatic opening ten days to the 101st edition of the Tour de France, finally there is a chance to draw breath and look back on what has been the best opening half of the race we can remember. Here, we identify some of the winners and losers over the opening 10 stages.

Yorkshire looked glorious in the sunshine for the Grand Départ weekend. But by the time the race reached London on the Monday afternoon, the rain was coming down, a portent of what lay in wait across the Channel.

Yet as the race headed to France, some riders, including Lotto-Belisol’s Jurgen Roelandts were relieved to have got away from Great Britain unscathed – the narrow roads, the throng of fans, many taking selfies – and to be heading back to the Continent.

Be careful what you wish for. The very next day, half of Roelandts’ team came down in a crash close to the Belgian border, with Greg Henderson forced out through injury. Indeed, since returning to its home country, the heavens have opened in earnest and a string of crashes have seen numerous riders abandon the race or be ruled out of overall contention after losing time.

It seems much longer than a week and a half since the race got underway, but the promised “Grandest of Grand Départs” will live long in the memory, not least for the enthusiasm of the huge crowds, a contrast to the more muted support now the race is back home.

Nibali vs the toughest first week in decades

With Chris Froome and Alberto Contador crashing out of the race, Vincenzo Nibali is in firm control of the race. Already, some are saying that if he does win, the absence of his two big rivals would devalue his victory.

We disagree. No-one bangs on about how a banned Contador or injured Andy Schleck were both missing when Sir Bradley Wiggins became the first Briton to win the Tour in 2012, do they?

More importantly, while we’ll never know how an uninjured Froome may have fared on the Stage 5 cobbles, not how Contador’s planned attack yesterday on the way to La Planche des Belles Filles might have panned out, Nibali was the main protagonist of both those stages, as well as the other showpiece stage of the opening ten days when he won in Sheffield.

The first week or so of the Tour is supposed to be a time for the yellow jersey contenders to keep out of trouble. Granted, the opening half of this year’s race has been particularly tough, both in terms of the route and the weather, and yesterday was always going to be a big GC day.

But Nibali alone among the overall contenders has shown the flair and determination to seize the opportunities presented by the parcours, and while he profits from the departures of Froome and Contador, it’s no coincidence that the Astana man thrives on the kind of conditions we have seen in recent days.

Here’s a measure of the scale of Nibali’s achievement.  In recent years, the Tour has typically been won by a strong performance or two on key mountain stages, or taking minutes out of rivals in the time trial – sometimes both – and the race can be won by someone who hasn’t won a stage at all.

However, should the Italian win the Tour, he will be the first man to have done so and won two road stages in the opening ten days since Eddy Merckx 40 years ago.

Kittel vs the other sprinters

One of the big “what-ifs” of the 2014 Tour de France will be could Mark Cavendish have taken the yellow jersey in Harrogate if he hadn’t crashed on the approach to the line? We’ll never know the answer to that, but whatever the debate between their respective merits, Kittel has established himself as the top sprinter left in this year’s race.

In winning the first three sprint finishes of the race, he also set an astonishing record – six Grand Tour road stage victories in seven attempts, beginning with his win over Cavendish on the Champs-Elysées last July, his triumphs in Belfast and Dublin before abandoning the Giro d’Italia in May, and the Tour stages in Harrogate, London and Lille.

The sole one he missed out on was when Nibali took the victory on Stage 2 in Sheffield although that was never going to be a day for the sprinters – Kittel crossing the line long after the Italian had replaced him as race leader.

Tony Martin vs the peloton

Anyone who watched the stage of last year’s Vuelta when Tony Martin was caught metres from the line after a day-long solo attack would have been willing the Omega Pharma-Quick Step rider to succeed on Friday’s Stage 8 to Mulhouse where he dropped fellow escapee Alessandro De Marchi of Cannondale and struck out on his own with 60 kilometres remaining.

With the final categorised climb crested around 40 kilometres out, Martin was able to use his descending skills to keep a margin over his pursuers as he headed to the bottom of the valley, then the time-trialling ability that has three times brought him the rainbow jersey to power on for the win.

He was perhaps fortunate that in the main bunch behind, Nibali’s Astana team had knocked off the pace to allow the yellow jersey – and the duties of defending it and associated post-stage protocols – to go to Lotto-Belisol’s Tony Gallopin, who was in a second breakaway group chasing Martin, but that shouldn’t detract from the German’s victory, his first in a Tour road stage.

Despite his efforts on Sunday, Martin was back in the break yesterday, this time working tirelessly for team mate Michal Kwiatkowski, although the Pole ran out of steam on the final climb and lost the best young rider’s white jersey to AG2R’s Romain Bardet.

Germany vs the Rest of the World

It’s not just in football where Germany are dominant right now; of the 10 stages to date in this year’s Tour, half have gone to German riders – three to Kittel, one to Martin and one to André Greipel.

In fact, you have to go back to 1937 for the last time three Germans won stages in a single edition of the Tour, and one of those was awarded the win jointly with a Belgian rider after a dead heat.

The sport has been in the doldrums in Germany in recent years due to a succession of doping scandals leading sponsors to pull out of cycling and TV coverage of the Tour to be pulled, although there is still public appetite – many fans made it across the border to cheer Martin to victory on Sunday.

Could things be changing as a result of this new crop of riders along with others such as John Degenkolb? Well, it looks as though coverage of the Tour de France will be returning to German television in 2015…

Peter Sagan vs the Points Competition

He may not have won a stage so far in the 101st edition of the Tour, but Peter Sagan is running away with the points competition and it’s difficult to see anyone stopping him from taking the green jersey for a third year in a row.

Sagan may only have won one stage last year, but he beat Cavendish to the green jersey by a thumping 97 points, and the key to his success is a combination of consistency, his ability to deal with tougher terrain than the pure sprinters, and his single-minded pursuit of intermediate sprint points.

Currently, the Slovak lies 151 points ahead of his closest challenger, Europcar’s Bryan Coquard, who has been a bit of a thorn in the side for Sagan at the intermediate sprints, to the Cannondale rider’s evident annoyance.

But Sagan’s pure consistency in the opening week of the Tour, given the difficulty of the parcours, was astonishing.

Second in Harrogate, fourth in Sheffield, second in London, fourth in Lille and Arenberg-Porte de Hainaut, fifth in Reims and second in Nancy – it’s only when the race hit the Vosges mountains at the weekend that he dropped out of the top five finishers.

If he’s still in the race come Paris, he is a shoo-in for the podium.

As we head towards the halfway point of the race, it's also worth bearing in mind who has missed out. Clearly, stars of the calibre of Mark Cavendish, Chris Froome and Alberto Contador will be missed, while the likes of Joaquin Rodriguez saw overall hopes dashed very early on, the Spaniard now refocused on the points competition.

Orica-GreenEdge had a cracking start to last year's race with three stage wins in the first four days, including the team time trial, and getting three separate riders into the yellow jersey. Cavendish bringing Simon Gerrans down in Stage 1 probably cost the Australian the chance to compete on the following day's stage to Sheffield, but his team will be looking for stage wins in the rest of the race.

Other teams with something to prove include Trek Factory Racing - Jens Voigt did a crowd-pleasing solo attack on day one, while Fabian Cancellara is among its riders getting into breaks, but without reward so far, and missed the vital move on the cobbled stage.

Among the French teams, AG2R is having a great Tour with Blel Kadri taking a stage win and Romain Bardet fourth overall and in the white jersey, but for all Europcar's attacking through Thomas Voeckler and Pierre Rolland, they will be hoping for a better second half to the race, while other home outfits such as FDJ.fr, whose Thibaut Pinot finished second yesterday, will continue to chase that elusive stage win.

That means plenty of teams and riders will be reassessing their targets today for the rest of the race, not least Tinkoff-Saxo who unlike Team Sky with second-placed overall Richie Porte don't have a Plan B... and if it's as exciting as it has been so far, we're in for a treat.

All pictures courtesy Welcome to Yorkshire/letouryorkshire.com