KTM might not be the most visible bicycle manufacturer in the UK despite their predilection for bright bright orange bikes, but they’ve made 4 million bikes and are sold in 50 countries so it’s probably just us. They’re quite the big thing in Europe though and invited road.cc over to the achingly picturesque Attersee in their home country of Austria to look at their new range of bikes for 2015 and to celebrate their 50th anniversary. 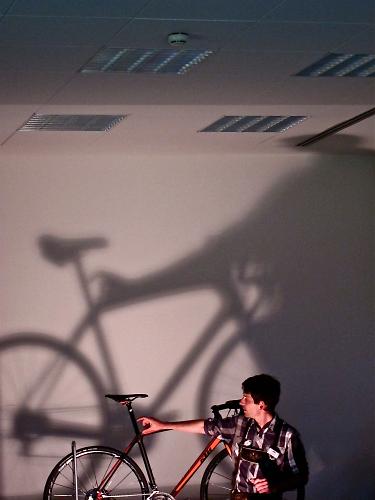 KTM make a bike to please everyone; road, cyclo-cross, mountain, city, trekking and e-bikes. They’re particularly keen on the latter with over 30 to choose from in their catalogue and they’re also very proud of their “Made In Austria” tag, wearing lederhosen for the presentation for cultural stereotype, although the “Made” bit is always open to broad interpretation. We’re here to look at what new road and cyclo-cross bikes they might have, especially since we tested their £1500 Revelator 3500 earlier in the year and found it to be a race-ready carbon bike in a thoroughly commendable package with bags of speed and decent handling. They might have more good stuff like that, you’d hope so. The Revelator still forms the backbone of their road range with nine variants from the Tiagra equipped 3300 all the way up to the Dura Ace DI-2 Prestige to choose from, but KTM are making a big noise of the all new Revelator Sky that joins their 2015 collection. It’s a frame designed not so much for the racer, which is the Revelators job, and more for the sportive or gran fondo rider with less aggressive angles for a more relaxed comfortable ride and with disc instead of rim brakes. The first KTM road bike with discs the Premium Carbon monocoque frame is designed for bolt-thru axles front and rear with a 15mm axle in the front and in a move that will please those that like a new ‘standard’ comes with a 142mm rear axle width. KTM are used to applying that oversized rear axle to their mountainbikes so practising “this is what we know” logic have transferred it to their new road bike. The thru-axles add both a level of stiffness and safety to the wheels and frame ensuring that those discs can work to the best of their performance advantages. The Revelator Sky also features Shimano’s new Flat Mount disc mount standard (what was that about standards?) that’s been specially designed for disc equipped road bikes. The new mount comes with the claimed benefits of a cleaner, integrated design that will look neater on road bikes, offer a direct interface with the frame and fork for better alignment and improved tool access to the rear brake for calipers tucked fiddly between the seat and chainstays. It might remind cyclists of a certain age, particularly those of a mountainbike persuasion, a little of a Hayes disc mount. What goes around… The new system is compatible with current Shimano calipers with the simple addition of adapters. 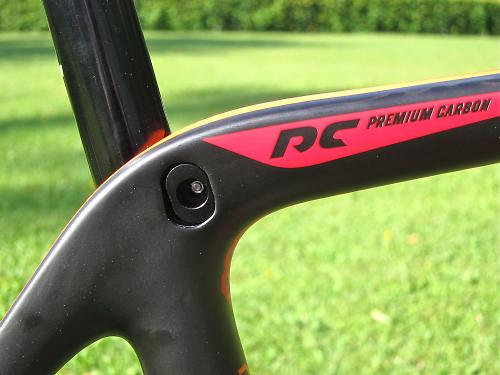 The Revelator Sky comes with both integrated cable routing and Di2 ports and is designed with a shorter seat-tube length to allow the 27.2 seatpost more room to flex for added all-day comfort, and that post is held in with an integrated seatpost clamp giving the bike really clean lines. 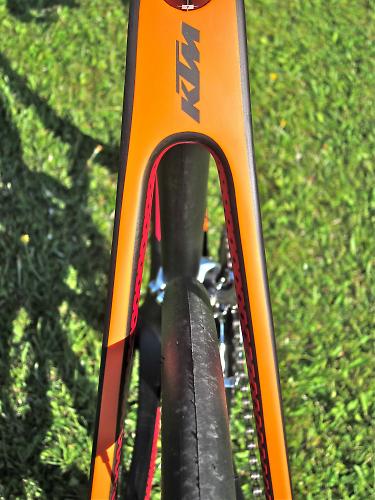 The longer rear 415mm chainstays are drawn out a good 10mm more than the standard Revelator, help towards rear end enjoyment and gives room for an absorbent 28mm tyre to fit in there, but they’re asymmetric for more direct power transfer. A now pretty much standard tapered headtube keeps the front end pointed where you want it while a non-standard KTM specific oval steerer allows side-to-side rigidity but with increased ride comfort, it says here. Sitting on the scales at 1150g for a 55cm frame the Revelator Sky is about 400g bulkier than the standard race-bred rim-braked Revelator frame, thanks to the disc mounts and thru-axles, making a whole bike come in at 7.9 kg according to KTM. Price for the Revelator Sky with Shimano Ultegra will be about €2,899. We had the chance to give the Revelator Sky a brief spin around the Attersee lake and point it up and down the hill a bit. From the first pedal stroke it’s apparent that you could ride this bike comfortably allllll day; the less than aggressive angles and longer wheelbase make the bike incredibly easy and comfortable to ride and deliberately hunting out lumps and potholes in the perfect Austrian tarmac the Revelator Sky showed that the frame did a good job of softening out the effects of a poor road surface.

Those relaxed all-day angles, the head angle varies from 71 degrees on the smallest frame to 72 on the largest, do result in a bike that handles well towards the lazy end of the spectrum, let’s just say you wouldn’t want to steer this round a crit course, and standing up on the pedals, whilst stiff enough to not feel like you’re being sucked of power, doesn’t reveal a bike that isn’t itching to squirt forward with enthusiastic glee. But for the vast gruppetto of riders that don’t want a nervous twitchy handful of a race bike all this will do just fine. Switching to a standard Revelator model in the shape a Dura-Ace equipped Prime for an even quicker spin up the road for comparison instantly revealed how much the Revelator Air has been watered down for the less speed focused market. The Revelator Prime was aggressive, fast and up fired the road without any concession to mere mortals surviving a long day in the saddle. Next on the list of new road based product were the KTM cyclo-cross bikes in the shape of the carbon Canic CXC Disc and alloy Canic CXA Disc. KTM have a long history in cyclo-cross, producing high‐end CX bikes way back in the 1960s when they won several national and international titles and now they’re back in the muddy market. Their new race bred Canic CXC features a Premium Carbon frame with a monocoque front end. Like the Revelator Sky the frame features integrated cable-routing, a shorter seat-tube for 27.2 seatpost comfort flex, Flat Mount disc mounts for the hydraulic discs, asymmetric chainstays and a tapered headtube. The frame and fork feature bolt-thru axles, 15mm in the fork and a 12mm/135mm rear. Unfortunately there wasn’t a working bike there to have a play on, just a full-size 3D printed prototype with Ultegra kit gingerly bolted to it. Unfortunately someone knocked it over and it broke into several pieces before we had a chance to take detailed pictures of it. Awkward. It looked nice though, quite orange. Similarly unhelpfully the alloy Canic CXA was in an unrideable state, it was made of Actual Metal but was only quickly put together for the sake of photographs. With a 105 based groupset and cable discs the CXA is designed for the commuter, the hobbyist cyclo-crosser, as a winter bike or for those who like to mix up the terrain beneath their tyres. 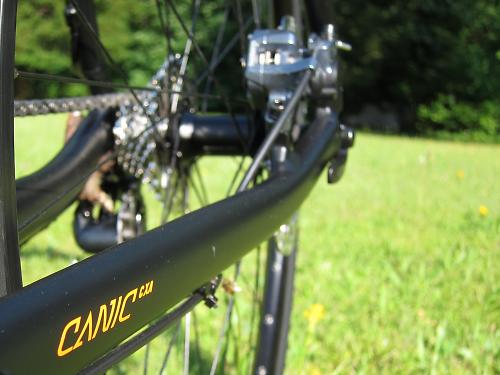 The Canic CXA comes with enough of the tubes being shaped to make it interesting; there’s a tapered head tube, the square top-tube changes orientation from front to back, the dropped chainstays rise up to meet the dropouts, cables are routed internally in both the frame and fork and there are functional rack and mudguard mounts. 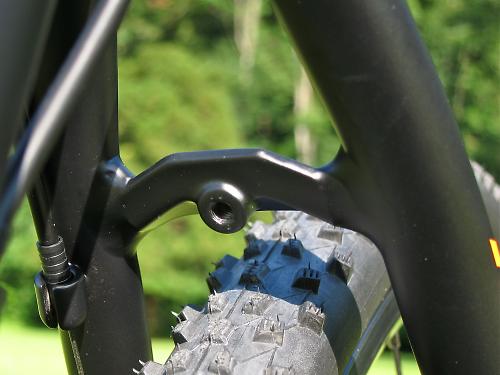 Just out of interest KTM were also showing their new eGnition electric downhill mountainbike, weighing nearly 23kg and with 160mm of travel it can go at an impressive 45kph via a Bosch  Centermotor. At € 5,199 it’s not cheap and probably not road legal here, but it may make a handy motor-pacing machine if you’re out training on your road bike. Just saying.