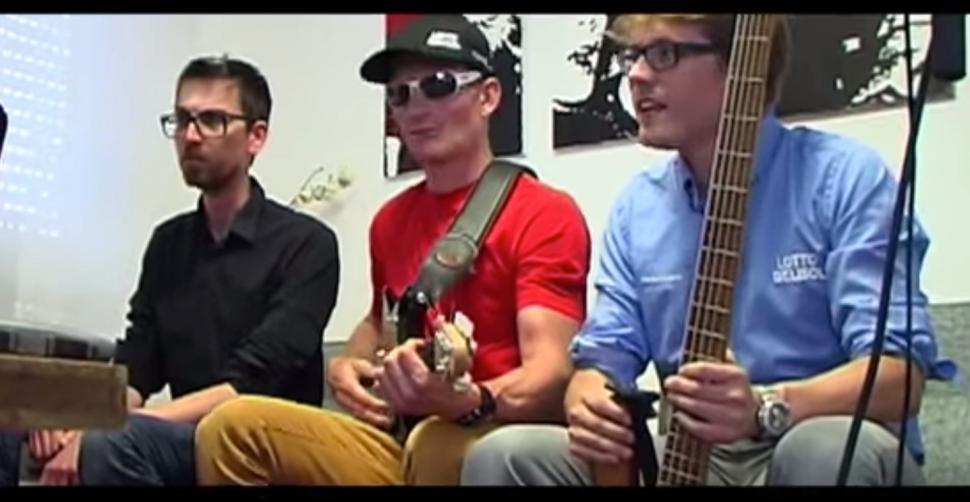 Ladies and Gentlemen, here's another fabulous edition of the road.cc video round-up. For your viewing pleasure this week we've got our obligatory piece of Tour de France madness, two inspiring cyclists at either end of the age spectrum, an obstructive alligator, and two videos - including a gaffe from Chris Boardman - from our range of road.cc Tumblr goodies.

We couldn't possibly do a video round-up at this time of year without including at least a little something from the Tour de France.

This video comes to you straight from the mouth of your favorite German Lotto Belisol sprinter, André Greipel . We decline to pass judgment on the quality of the music or the six-time Tour stage winner's singing - we are but a cycling website, not a music one - so we'll let you make your own minds up.

This beautiful documentary follows 71-year old Dutch journalist and novelist, Tim Krabbé, on his ride of the cyclo-tourist sportive Tour of Flanders earlier this year.

Krabbé's famous novel, The Rider, which was published in 1978, is an intimate piece which catalogues the pain, strife and joy Krabbé endures over the 150 km route of the Tour de Mont Aigoual.

The creators of the video, Dutch cycling magazine, Soigneur, manage to reflect the intimacy of The Rider by interweaving photos of Krabbé in his youthful ‘first’ cycling career with footage of him riding Flanders this year in his old age and ‘second’ cycling career.

Right, enough of the arty-farty stuff, and back to the bits we know you all want to see.

In our first video round-up comedy clip we’ve got a strange encounter on an American road. Selfies have been in the news this week following the Tour de France's visit to Yorkshire - Geraint Thomas described spectators taking them as "a pain in the arse" - but here's one that goes wrong when an alligator crosses this cyclist’s path. What follows is comedy gold.

The cyclist seems repentant, realising the foolishness of trying to take a selfie while riding, and reflects in the video’s ‘about’ section that “the accident could have been way worse especially if the gator would have charged me. LOL”.

Watch out for the fence

Offing in a cyclocross race doesn't bring about quite the same sympathetic wince that falling mid-peloton usually does. However, the slower speeds and obstacles can provide comedy moments, just like this one.

This race, and comedy impact, took place in road.cc's hometown of Bath, up at the local Odd Down Cycle Circuit a couple weeks ago.

Another cute quickie. Do you remember learning to ride? Of course you don't, but you might have kids who you've taught. This young lad has taken to cycling from a young age, even sans-stabilisers.

To deal with the struggle of storing a bike upright in a post-stabiliser world, he tries to utilise the ever-useful kick stand... nawh!

If you haven’t already, it’s about time you took a look around our road.cc Tumblr. Below are two videos that we’ve featured recently, but there’s a whole lot more rolling through the digital gates, including quirky gifs, images, amazingly strange bits of kit and much more.

We were all sad to see the Tour leave after three fantastic days of racing, but it’s been here before and Christian Prudhomme has told us that it will be back again.

The Tour de France hasn’t ever seen a British rider win a stage on British soil, but in 1994 Chris Boardman thought he came a lot closer to breaking that duck than he really did.

The race came across The Channel for two stages, the first of which saw an excellent ride from the current ITV pundit, who apparently thought he was leading the race as he crossed the line in Brighton. Oh Chris.

Whether you’re a Tour de France geek, or a bit of a newbie, you can’t possibly know everything about the history of the famous race, can you?

Here’s a little animation that should bring everyone up to speed. And, hey, even if you think you know everything there is to know about the Tour, you’ll still enjoy the video’s charm.