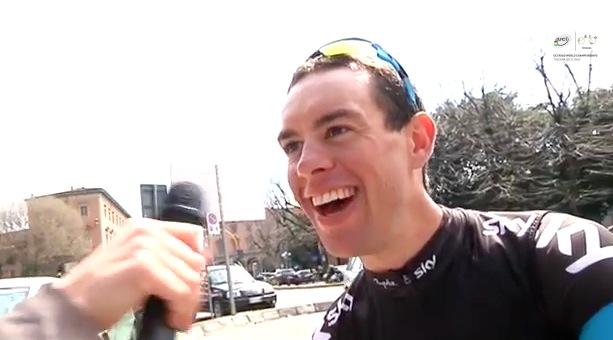 Tasmanian to spearhead challenge after defending champion crashes out
by Simon_MacMichael

Richie Porte has the full confidence of Team Sky as its aim of winning a third consecutive Tour de France falls on the Tasmanian’s shoulders following the exit of Chris Froome today after the defending champion, carrying injuries from a fall yesterday, crashed twice on today’s Stage 5.

Froome abandoned ahead of the seven sectors of cobbles used in the Paris-Roubaix one-day Classic, but it’s perhaps telling that the two specialists in such races in Sky’s Tour de France team – Geraint Thomas and Berie Eisel – were not looking after him, but were assigned to Porte instead.

Following the stage, team principal Sir Dave Brailsford told the Team Sky website: "This is incredibly sad for Chris and for the team who have supported him so well. We really believed in Chris and that he would win this race again. His bravery was incredible but the crashes just took their toll and he had no choice but to abandon.”

Prior to the Tour beginning, amid the controversy of 2012 Tour winner Sir Bradley Wiggins being left out of the squad, Froome had insisted that Porte represented an ideal Plan B should mishap befall him.

Brailsford said: "When you have a setback you need to be resilient and flexible. You recalibrate your goals and you go again. Our backup plan is Richie Porte who's a great rider who will now lead the team. He’s come into form at the right time and given the way he is climbing we’ve got an exciting two and a half weeks ahead of us.

"This is Richie’s opportunity now, he steps up and he has the full support of the team. One man’s misfortune is another man’s opportunity and part of sport is adapting to changing circumstances."

“I’m glad to have got that stage done – the racing was on all day and it was such a stressful stage,” said Porte. “Given his fall yesterday, it was always going to be hard for Froomey to hang in there, so the decision was made on the bus that I’d have G and Bernie to ride for me, and they did an incredible job on the wet and slippery roads.

“It was carnage before we even reached the cobbles, and I went down after the second sector myself, but fortunately I only had a few minor grazes.”

He added: “It’s a massive loss losing Chris. But he’ll back hungrier than ever next year. Now I have an opportunity to go for as high a GC position as I can. It’s a relief, personally, to have come through stages two and five OK, and I’m looking forward to heading into the mountains now.”

Thomas said: “It’s a mega loss losing Froomey, but that’s bike racing and we have to accept it. It’s kind of like Brad [Wiggins] in 2011 when he crashed out with a broken collarbone.

“You have got to take the positives from it. Back then we saw it as our chance to go for stages and Richie has got a great chance to ride for himself and I’ve got every confidence that he can do that.”