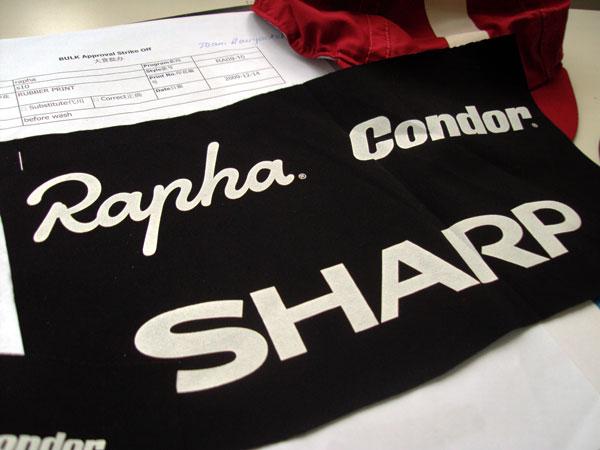 Top British cycling team Rapha Condor today announced the addition of a new title sponsor to the team, the electronics company Sharp which means that from next season Rapha Condor becomes Rapha Condor Sharp. The official news of the hook up is final confirmation of something that had been rumoured for weeks – both Rapha Condor and Sharp support the Prostate Cancer Charity the Rapha Condor team wore Sharp4Prostate logos on their jerseys during the Tours of Britain and Ireland this autumn.

Rapha Condor Sharp will continue to support the Prostate Cancer Charity in 2010 and will be offering advice and support to a team of four from Sharp who are attempting the Race Across America for Sharp4Prostate.

“Our partnership with Rapha Condor marks a turning point for Sharp as a brand in the UK and we are thrilled to be supporting the huge potential growth of British professional cycling. On behalf of Sharp, I’d like to wish the team the best of luck in achieving its goals for 2010 and beyond – we’ll be right behind you!”

Meanwhile Grant Young, Managing Director of Condor Cycles, described the significance of Sharp joining a team that has grown from humble beginnings just four years ago:

“With the additional support offered by Sharp we take another big step along the road to our ultimate goal of putting this team on the world stage. A few people laughed at us when we began this project, but each year we’ve taken big steps forward, grown a little and learned a lot. 2010 will be another important year for us and with Sharp we hope to demonstrate that this its possible to grow a team from nothing like this. Our partnership with Rapha has been of mutual benefit to our brands and we know it will do the same for Sharp”

With the addition of the new sponsor to the jersey, it’s the team at Rapha led by Simon Mottram, Chief Executive of the company who will have the task of integrating Sharp into the well established Rapha Condor brand:

“Over the last few years we’ve become a bit of a cult brand in the cycling world. The values of the Rapha and Condor brands are embodied in the way we run the team, not just the clothes they wear and the bikes they ride, but the way they ride and the way they conduct themselves. We’ve become used to being a focal point for the domestic sport in the UK. Our commitment to the sport and particularly that of Condor who have stuck with road cycling through the really tough times has outlasted many others and now we’re starting to recoup that investment as other brands want to be a part of what we’ve built. It’s great to have Sharp on board. You’ll have to wait to find out what the kit will look like, but we’re really happy. When you see the new jersey it’s like Sharp has always been there, that’s what we were hoping for, a natural fit, and that what we think we’ve found in Sharp”

But what difference will the growth of the team have on a sporting front? Team Manager John Herety put together a squad that won nationally and internationally in 2009 including a memorable National Championship victory in Abergavenny. He described some of the development of the team and the broader changes in the sport in the UK:

“When the guys at Rapha and Condor formed this team you could still do things the old way with a few handy riders, some kit and a bit of ambition. It’s to their credit that they’ve always anticipated the changes in the sport here in the UK. Whether it’s the introduction of the Tour Series, the development of Tour of Britain or just the general growth of the sport, Grant and Simon have always been there ready to find the ways to respond in order to keep the team at the top of the tree. Last year we took some great wins, the National Championships, four Tour Series rounds, the Ras, Matt and Darren’s stages at Tour de Beauce. We acquitted ourselves well at the Tour of Britain too. That is the area where I want us to get better this year and with the investment from Sharp we have the riders and the programme to deliver them to that objective in peak form, so long as we get an invite of course!”