We had a poke around Andy's brand new bike, and asked him about his plans for the Tour...
by dave atkinson

Just a day after the launch of the Émonda we’ve seen the first one being ridden in anger, and by none other than Andy Schleck of Trek Factory racing. So, of course, we stopped him and asked him a few questions about it. Well, actually he’d already stopped, because we were standing by the team bus. 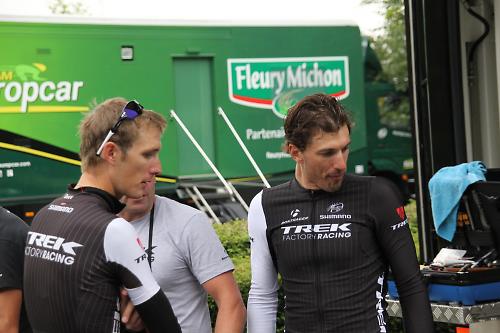 Anyway. “I’ve been riding it since after the classics”, Andy told us. “Straight after Liege I had a few days off with my knee and after that I started training. We had to change back (to the Domane, which Andy has been riding up until now) for the Tour of Luxembourg and the Tour de Suisse”

But Andy will be riding the Émonda at the Tour, as will brother Frank. Asking who was riding what started a bit of a discussion between Andy and Gregory Rast, the upshot of which was that Jens Voigt is sticking to his Madone, Rast, Cancellara and Danny Van Poppel will be on Domanes, and Andy and Frank, along with Matthew Busche, will be on Émondas. Not sure about Haimar Zubeldia and Markel Irizar, though. Fränk has one too

And does Andy like it? “I liked it from the start”, he told us, perhaps not surprisingly within earshot of the management and sponsors. But anyway: “I was on the Domane before and this is like the perfect combination [of the Domane and Madone]. It’s really light. You should try it out!”. We certainly intend to, although the surly glances from the team mechanics were enough to dissuade us from trying his. Or even touching it.

Andy’s plans for the Tour? He wasn’t telling. “I keep them to myself”, he said. “I have goals, and I think they’re realistic, but we will see”. Interestingly the team haven’t had first-hand experience of the Yorkshire stages. “There’s been no recce. We’ve done everything in France, from the cobbles to the Vosges to the Pyrenees to the time trial, but not these stages. I hear that Stage 1 is likely to be a bunch sprint. The second one, everyone says it’s a lot like Liege. I think it will be tough.” You’re not wrong there. 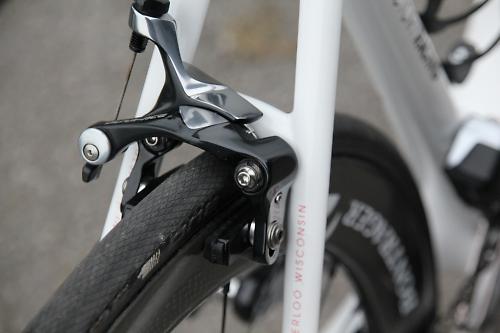 So what’s Andy’s setup like? His race bike has a full Dura Ace groupset; The Émonda has direct mount brakes front and rear and Andy’s bike has Shimano’s units, not the fancy-pants Bontrager Speed Stop ones we saw on the 4.8kg launch bike. 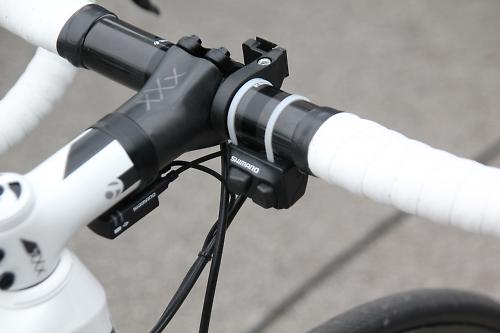 As well as standard STI levers Andy also uses a climbing shifter to control the rear mech when he’s riding on the tops. The stem is slammed (of course) and looks like a 130mm. Andy uses a standard drop bar, as do most Pros though not all, we saw some shallow drop bars on some of the Europcar Colnagos. Andy’s bars are a classic shape; other Trek team bikes (including Cancellara’s) were ergo. It’s all down to personal choice there. 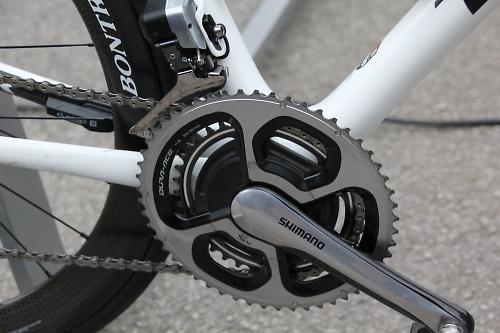 Trek use SRM powermeters and Andy’s bike has a Dura-Ace SRM crank, although it also sports a DuoTap sensor on the chainstay. 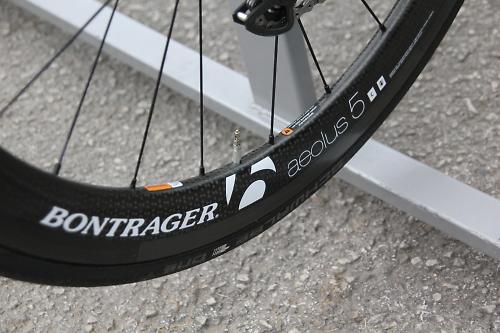 Wheels are Bontrager Aeolus 5 tubulars (a popular choice with the Trek team it would seem) with 25mm Schwalbe One Tubulars.