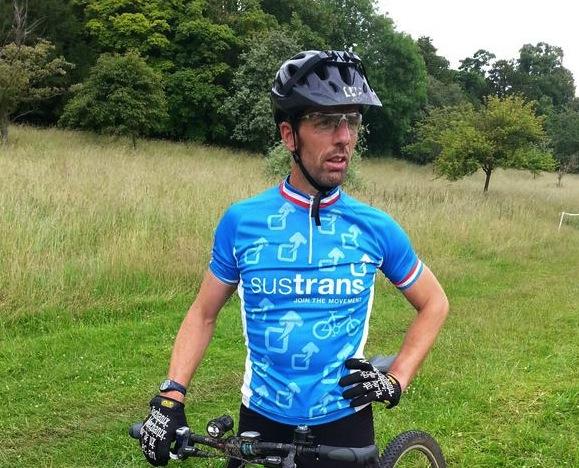 A Sustrans Bike It Officer who works to promote cycling in schools has beaten the world record for distance travelled off-road on a mountain bike in 48 hours.

Ben Sherratt from Brighton decided to inspire the children he works with by riding for the record at a home-grown bike festival - Ben's final distance was 619Km - 384.7 miles. He stopped briefly when he reached the 600Km mark with a suspected stress fracture to his wrist, but after a quick rest and being told that he wouldn't make the injury worse Ben carried on to ride the full 48 hours.

"It was wonderful to finish the ride surrounded by all of the children who had come along to try and beat my total distance with their school teams and to try and be the winning school covering the most distance. We are still waiting for the distance totals racked up by each school but I am hoping that they smashed my record to bits!", Ben told road.cc.

"We originally aimed for 365 miles as it was a way of demonstrating the distance of riding every day for a mile. Having secured that , I couldn't just stop, so I just carried on riding, it was fantastic!"

Last year, Ben launched BikeStock, a mountain bike event for kids held in Stanmer Park, Brighton. He cycled more than 200 miles in 24 hours, and threw the gauntlet down to youngsters to rack up more miles, combined, than he managed – which they duly did once all their laps of the one-mile, woodland circuit were totted up.

The 365 mile mark was significant for Ben, as it represented one mile for each day of the year as part of an initiative to get local kids cycling – and he challenged his charges to match him mile-for-mile again this time.

Starting at 3pm on Thursday at Stanmer Park Ben aimed to pedal all the way through until the same time on Saturday afternoon.

For the final four hours, starting at 11am on this morning, he was joined by the youngsters hoping to amass enough miles between them to beat his total.

Ben was undertaking the challenge partly to encourage kids to get riding, but also to raise money for Sustrans and the East Sussex Association for the Blind, with donations being accepted through his page on Virgin Money Giving.