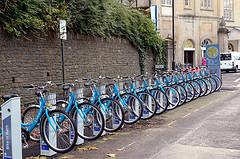 Oxford’s bike hire scheme has been relaunched six months after it folded, after the council found a new operator.

Oxfordshire County Council will now be running the OxonBike scheme with HourBike Ltd, bringing 30 cycles to seven locations around Headington. in East Oxford.

The £150,000 project was originally launched in June last year, but the two-year pilot only lasted six months before its operator Grand Scheme Bike Share went into liquidation.

The new arrangement, funded by the government through its Local Sustainable Transport Fund.
is to last for a year, with the bikes free for the first 30 minutes.

David Nimmo Smith, the county's cabinet member for transport, told the BBC: "When the scheme launched last year around 500 people signed up, so I am sure that those people will be very keen to get back in the saddle.

"Commuters who use Thornhill Park and Ride and who travel in and around Headington to places like the universities and hospitals will find OxonBike particularly useful."

Meanwhile in Bath the cycle hire scheme has also been relaunched with a new operator and more hire points.

Bath and North East Somerset Council came to the end of an arrangement with the Italian firm which has run the bike hire scheme since September 2011 - and it was taken over by the German firm Nextbike.

Cabinet member for transport Councillor Caroline Roberts told the Bath Chronicle: “The new and improved council scheme will boost cycling as a more viable option for people wanting to get around Bath and the surrounding area by bike.

“The cycles can also explore surrounding routes like the Two Tunnels Greenway and Kennet and Avon Canal Path since there will be no restrictions on where they can be ridden.”