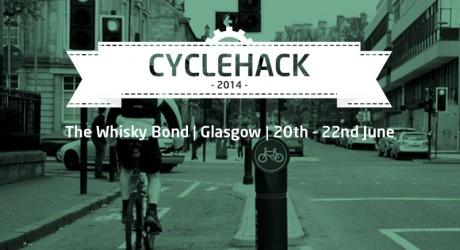 Glasgow is one of five cities around the world that will this weekend host Cyclehack, bringing together people from around the world to come up with ideas to make urban areas better for cyclists – and to turn their ideas into reality.

Belfast, the Lebanese city Beirut, Melbourne in Australia and Tbilisi, capital of Georgia, are also involved in the 48-hour event, which is free to attend and includes workshops, films and presentations as well as hands-on sessions to devise hacks and build prototypes. The concept is explained in this video.

Organisers say: “During Cyclehack, teams of people with a variety of skills create and build new ideas to reality in just 48 hours, which are subsequently uploaded online for the world to share. The event is supported by people who are excited about making cycling easier where they live and have experience of moving around the city. To add to the mix, software developers and designers contribute to help make the ideas real over the weekend.

“Typically the first evening is spent discussing ideas and forming small teams. Hack ideas are presented having been submitted to the event organisers prior to the weekend, who have been busy collecting city cycling barriers and issues via their research and interviews. All the ideas are open source under the Creative Commons Copyright License for anyone around the world to share.

“Following the event, an exhibition created via a variety of materials will conclude the research gathered from the Cyclehack event, access to which will be available to the public.”

Cyclehack Glasgow began yesterday evening at the Whisky Bond, 2 Dawson Road G4 9SS, and concludes with a prize presentation of the best hacks at 8.30pm on Sunday.

1
“People need to see justice being done”: CyclingMikey says camera cyclists suffer online abuse because some motorists “feel they have the right to drive how they want”
2
Near Miss of the Day 848: An overtake worthy of the 'must get in front' title
3
Near Miss of the Day 847: Careless caravan close call causes cyclists concern
4
Mavic launches the Cosmic Ultimate as “lightest wheelset in its category”
5
Victory claimed for harassment campaign by “mob of decent people” as helmet cam cyclist deletes Youtube and Twitter accounts
6
Large vehicle may have crashed into controversial bike hangar, council says
7
Judge tells man who "played the system" after dangerous driving killed two young boys to expect "very significant sentence"
8
“Cyclists welcome – just in the right place”: Coastal path upgrades set to be shelved over concerns about environmental impact and “speedy cyclists”