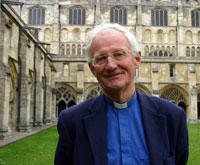 A popular priest from Norwich who also served as leader of the Liberal Democrat group on Norwich City Council has died in his sleep after cycling to the United Nations Climate Change Summit in Copenhagen.

Canon Hereward Cooke, aged 70, had cycled to the summit with 25 other campaigners in a ride organised by the charity, Christian Aid. There are no reports as yet of his death, which the Bishop of Norwich described as sudden and unexpected, being linked to the ride.

The 140-mile ride was undertaken in three stages, starting at Stansted Airport, from where the group rode to the port of Harwich to take a ferry to Ebsjerg. After that, they rode 50 miles from Middlefart to Roskilde, before completing the trip with a 30-mile leg into Copenhagen.

Canon Cook, who leaves a wife, Diana, and two children, retired last year, although he continued to act as environmental officer for Norwich Diocese, according to BBC News.

Prior to traveling to Copenhagen, he had said: “The climate change talks in Copenhagen are one of the last chances we have of obtaining international agreement on carbon reduction measures.

"Making our presence felt there is one way of letting our political leaders know the ordinary man or woman on a bicycle is personally concerned with the outcome of their deliberations.

"I also hope that this high profile ride will encourage Churches in the UK to take appropriate action in their local communities."

The Bishop of Norwich, The Right Reverend Graham James, Bishop of Norwich, said: “Hereward Cooke was widely-loved and appreciated, as a pastoral priest, an industrial chaplain, a Norwich city councillor and, most recently as our diocesan environmental officer.

"It was in that capacity that he was at the Copenhagen Conference and entirely typical that he cycled there," he continued.

"Hereward had a zest for life and was always positive about the potential of his fellow men and women.

"He lived life in the fullness which God promises. We will miss him badly, and our prayers are with Diana and their family."

1
Car wing mirrors studded with spikes reported to Greater Manchester Police
2
Reaction as Transport for London pauses See their Side ad campaign following backlash
3
Cyclist shot by hunter who says he mistook him for a rabbit
4
New Zealand MP goes into labour, cycles to hospital to give birth
5
Cyclist sprints away from knife-wielding mugger – and warns others to be vigilant
6
Government clamps down on handheld mobile phone use while driving
7
Road rage driver who rammed and killed cyclist and then boasted about it jailed for 10 years
8
Five cool things coming soon from Black Inc, Met, Koo, 7mesh and Moon