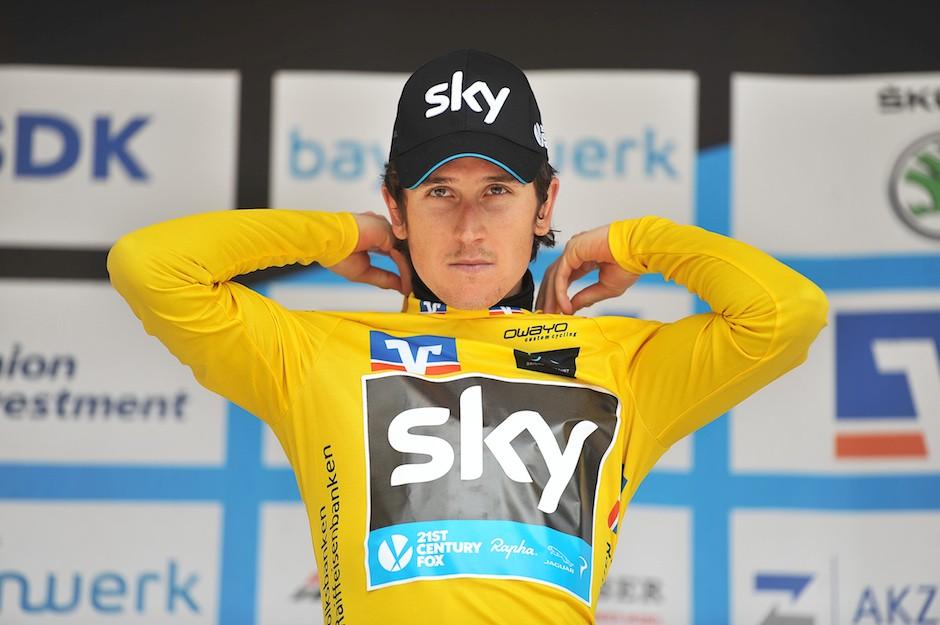 Team Sky’s Geraint Thomas says that he does not envy Sir Dave Brailsford in having to make the decision to leave 2012 Tour de France winner Sir Bradley Wiggins out of this year’s race.

Thomas, who recently revealed he was in talks with other teams about a potential move, has also disclosed he is likely to remain with the British WorldTour outfit.

Earlier this week, Brailsford said no final decision would be made on the final nine-man line-up for the 101st edition of the event until after the Critérium du Dauphiné, which begins tomorrow, and the Tour de Suisse, which starts next Saturday.

But yesterday Wiggins, who won the race in 2012, confirmed on BBC Breakfast that he won’t be riding the Tour de France unless defending champion Chris Froome is injured or falls ill ahead of the Grand Départ in Yorkshire four weeks today.

Thomas, who is likely to figure in the team, told Wales Online: “It’s a difficult one and I am glad I am not Sir Dave Brailsford and am just a rider.

“My main worry is getting myself in the best shape and getting on the start line.

“The selection of the balance of the team is down to other people.

“It’s a tricky one for those guys and I am glad I don’t have to make that choice.”

He continued: “It’s tough because there is a long list of 13 top Team Sky quality riders at the moment all trying to get a place in the team on the Tour de France.

“All you can doing is keep doing your job and there is no point going out there and racing for yourself.”

Last month, the double Olympic team pursuit champion, whose current contract expires at the end of this season, revealed that he was in talks with four or five other teams regarding a potential switch for 2015.

Now he expects to re-sign with Team Sky, saying: “It’s pretty close to being finalised and should be wrapped up in the next couple of weeks as we look to get it nailed down before the Tour.

“It was more about hearing out some of the other teams and seeing what they had to offer.

“It would have been a bit silly not to speak to anyone and just assume that where I was is the best place.

“But I have no reason to leave and I am happy here.”

Thomas, who last week took his second overall victory in German stage race the Bayern Rundfahrt, rode almost the whole of last year’s Tour de France with a fractured pelvis following a crash on Stage 4, and hopes to stay out of trouble this time.

“It is going to be a stressful opening few days with the pressure of starting in the UK and all the fans,” he said.

“There is going to be a lot going on but I am really looking forward to all of that.

“Hopefully we can get through unscathed without any incidents unlike last year.

“My aim is to get around incident free and do the job I know I can do.

“Last year was almost a write-off for the last couple of weeks.

“Hopefully I can be involved in the race a lot more than last year,” he added.