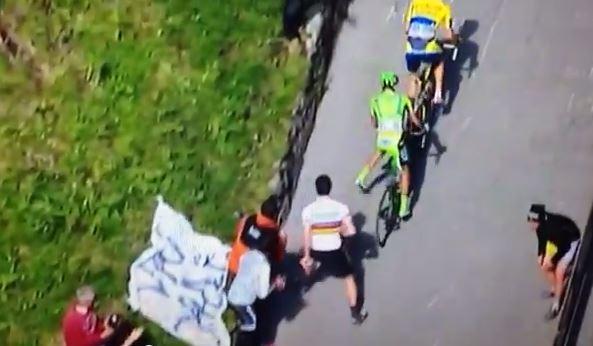 A man whose push on Francesco Bongiorno cost the Bardiani-CSF rider the chance to win on Monte Zoncolan on Saturday’s Stage 20 of the Giro d’Italia could become the first cycling fan to be banned from attending sporting events in Italy.

Police in Udine are trying to establish the man’s identity with the view to issuing him with a banning order known as a ‘Daspo’. Introduced to address problems associated with football hooliganism , these orders apply to all sports.

According to the news website Udine Today, video of the incident involving the spectator, who was wearing a replica world champion’s jersey, has been passed to police by Enzo Cainero of the local organising committee of the stage in question.

With 3km remaining of the climb of the Zoncolan, Bongiorno and Tinkoff-Saxo’s Michael Rogers were alone at the head of the race and seemed set to battle for the stage victory.

Over-enthusiastic fans had caused problems for many riders on what was the final mountain of this year’s race, with the biggest talking point being when a fan, trying to be helpful, gave Bongiorno a push.

Instead, the rider’s bike touched wheels with that of Rogers and Bongiorno needed to unclip to avoid falling off.

Losing his momentum, the Italian would never catch Rogers who rode off to the stage victory.

Bongiorno finished third with Androni Giocatolli’s Franco Pelizotti overhauling him ahead of the line, and immediately following the stage, he was in tears of both frustration and anger.