Ai Caramba! Trek have taken much talked and not a little hyped belt-drive District commuter bike and given it an OCLV carbon frame. Is this the world's ultimate road-going singlespeed?

No, because this is…

It's the special District Carbon that they ran up for Lance Armstrong which comes with such non-standard touches as a yellow belt and various bits of yellow detailing all round. 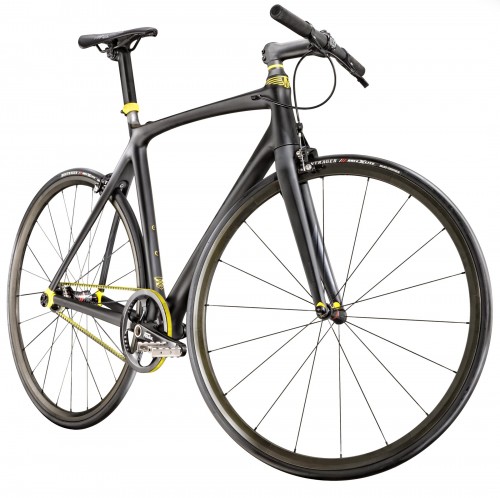 Mind you, terms such as 'non-standard' are a slight misnomer when it comes to the District Carbon, because in the UK at least it is only available as a special order at a 'special' price too £2800.

Still if you really want one of these are you going to be looking that closely at the price tag anyway? There is some fancy stuff going on there at the dropouts to facilitate getting the belt on and off – Trek open their frames at the dropout on the standard District models, and they do so again here, but in a slightly different way to take account of the different properties of carbon – it certainly gives the back end of the bike a very clean look. The frame looks like a Trek Series 5 OCLV carbon affair modified at the rear dropout – you can have a Madone 5.2 with the same Bontrager Race Lite Aero wheels and a Shimano Ultegra drivetrain for £2900, although that probably isn't the point – you either want a high end singlespeed or you don't. The advantages in this case, to go with the silent running of the belt, and the minimal maintenance required are that this must be an extremely light bike. 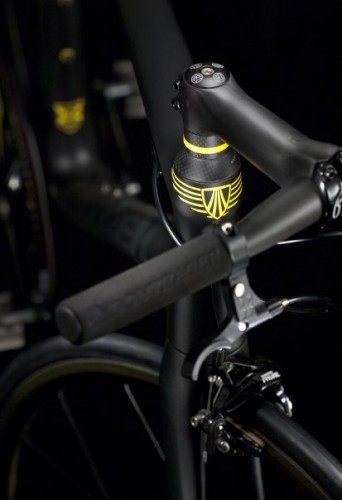 Interestingly Lance Armstrong has opted for flat bars on his special Carbon District – the 7th machine off in the run so we're told – I've got to say the road.cc office is torn on which to go for… those flat bars look so clean and minimalist and they'd certainly work around town – and as someone who has regularly ridden a flat bar bike on long day rides I'd have no problem with it for a long day out in the country either. On the other hand the standard issue version looks damn fast with those drops. Bottom line is there's only one in the country and we've already asked Trek if we can have it very, very nicely indeed, we'll be more than happy to take what we can get.

Rest of the finishing kit as you'd expect on a Trek is Bontrager branded as, possibly less expectedly are the Tektroesque Bontrager Speed Limit brakes – matched up to Tektro road levers, Armstrong's bike looks to have have a SRAM brakeset with what we took for Tektro flat bar levers, but looking at the detail shot reveals them to be way shorter and with a very distinctive curl at the end, which says resident parts tart Vecchiojo (see below) marks them out as Pauls E-Levers. 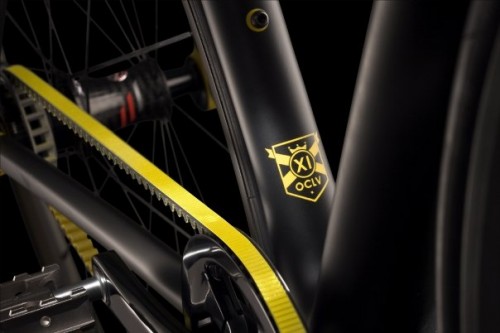 Drivetrain on Armstrong's bike is a SRAM Rival belt drive crank turning a Gates Carbon Drive 22T alloy belt sproket. Interesting The standard Carbon District comes with an FSA 55T Carbon Drive front crank. We're assuming the sizing is the same on both bikes, in chain terms 55-22T sounds big, but belt gearing is expressed differently – it's all about the ratios. This looks to be a pretty good all rounder set-up erring more towards the open road than the nip and tuck of urban riding.

Anyway it's probably already on a few Christmas lists although if you want one you're probably going to have to be really good.