Back in December I took a trip up to Lancashire to meet Paul Hewitt and be fitted for a brace of test bikes. The first of those, the excellent friend-for-life Cheviot SE tourer, is almost ready for review. The second has just arrived and I'll admit to being more than a tiny bit excited. It's the kind of bike you might promise yourself in return for a modest win on the Lottery, or perhaps a promotion – it's not a megabucks superbike, but it's definitely something special. 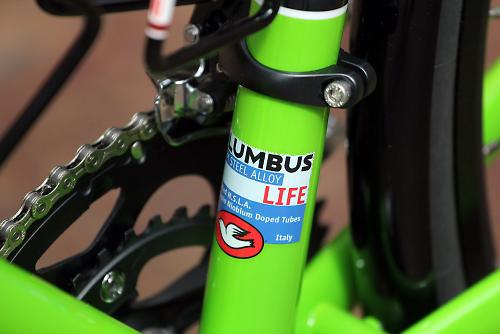 The Alpine is Hewitt's fast audax frame. It's a full custom build, which instantly sets it apart from anything off the shelf. The frame can be built in a number of different steels from Reynolds 631 (£1,050) through to Reynolds 953 Stainless (£1,800). Ours has been built from Columbus Life, which is a competition grade tubing (light, strong) and retails at £1,350. The price for the full bike, as specced, would be around £2,600 although you could get a complete bike from about £2,000. Although this is a steel audax bike, don't be fooled into thinking of it as a retro throwback for the beards and sandals brigade. It's a semi-compact, with a gentle slope on the top tube, oversized tubing and ovalised chainstays. It looks throughly modern, although the pump peg and braze-ons for mudguards and a rack make it clear that this isn't one of the new breed of steel racers. As you can see from the pictures, the Kawasaki Green paintjob gives the bike a real presence and an all black set of components gives the bike a lovely clean look. It's an absolute stunner and if it doesn't attract a whole load of compliments during the test period I'll eat an old inner-tube. Big Dave has already had a good perv and my wife is sulking because it's not hers. 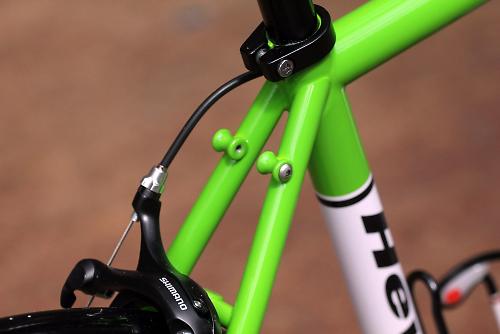 Everything about the spec was discussed, at some length, with Paul back in December. That's part of what makes the bike special – there's a whole process and relationship to be gone through before you take delivery, it's not just a case of slapping down a credit card and waiting for the postman. 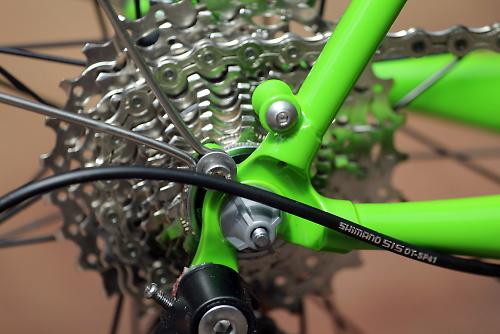 We've gone for a fairly modest build with a 105 groupset – after all, this is going to be a working bike that earns its keep on long audax rides so there's no need to pimp it to the max with fancy bits. The wheels are handbuilt by Hewitt: H Plus SON Archetype rims laced to DT Swiss 350 hubs with black spokes (28 front, 32 back). They look fantastic, and should be ideal for audaxing. Tyres are Conti GP 4000s in their 25mm flavour although you might be able to squeeze 28s in there if you really wanted. Other components are a sensible compromise between the desire to go fastand the need to keep going over yet another hill. The chainset is a 50/34 double but mated to a quite substantial 28t cassette. That gives a bottom gear of 32in which is only a fraction higher than the 31.7in bottom on my usual audax bike (Dawes Century SE) which has a triple. The Alpine is about a kilogram lighter and has a better wheelset, so I'm hoping that it will climb at least as well as the Dawes. The Selle Italia Max Flite Gel Flow saddle is a new one to my backside, but Dave thought it was well suited to long rides when he tested it a few years ago. Deda supply the stem and compact bars. The complete bike weighs in a 9.6kg (21.12lb). It's a rainy day down here in Devon, but once the clouds clear I'll be getting out and throwing the Alpine up tors and down valley roads. Full review to follow once I've got the miles in and worked out how much a 45yr old kidney is worth.

For more details go to www.hewittcycles.co.uk.