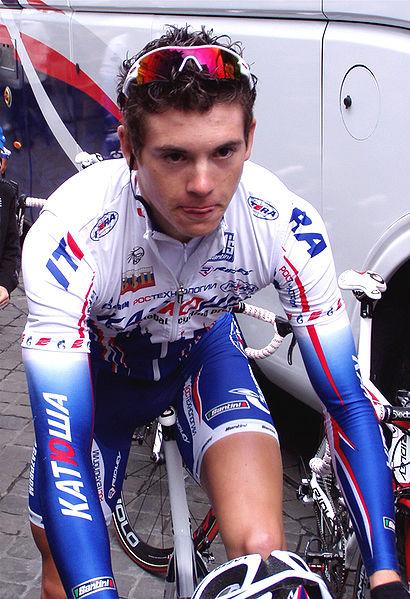 Ben Swift "named" in Team Sky squad for Tour Down Under

Speculation over Katusha rider's future continues - but does new Sky video drop a hint?...
by Simon_MacMichael

Team Sky’s efforts to sign Ben Swift from Katusha descended into farce over the weekend when organisers of the Tour Down Under named the up-and-coming rider among the British outfit’s starting line-up for what will be its maiden race.

It’s an open secret that Sky, frustrated in their efforts to sign Bradley Wiggins from Garmin-Transitions, as his team is now known, have instead turned their attention to Swift, who last season won a stage of the Tour of Britain and also managed a third place on Stage 2 of the Giro d’Italia.

A little over a fortnight ago, we reported that Swift appeared to be close to signing for Team Sky, but Katusha swiftly quashed that rumour. Despite their assertion that Swift would be riding for the Russian team next season, those rumours just refuse to go away, and further fuel was added to the fire last week when it was reported that Swift had missed the team’s first get-together ahead of the new season.

The BBC says that a spokesman for Katusha has asserted that “"Ben Swift will ride for Katusha until the end of 2010. He signed a regular contract with us and he has to respect it."

There is a question mark over the validity of Swift’s contract, however. Last May during the Giro d’Italia, the Yorkshireman, like his team mates, was required by his team to sign a new riders’ charter that provided for a forfeit of five years’ salary should a rider test positive.

That could be seen as constituting a variation in the terms and conditions of Swift’s original two-year contract, which still has a year to run, and would give the rider the right to terminate it. Certainly, Team Sky have been acting on the assumption that the rider is now a free agent.

"Our understanding was he had become a free agent. It was planning ahead," claimed Team Principal Dave Brailsford. "The information we received is that he'd quit and terminated his contract."

"The situation regarding Ben is in the process of being resolved," he added. "As a team we haven't actually been directly involved with regards his current team - that's him acting independently with his agent.”

"Were he to become a free agent - as we were led to believe - then in our pre-planning we have foreseen a situation where Ben, were he a Team Sky rider, would compete in the Tour Down Under,” continued Brailsford. "However, we respect the fact that there is an element of speculation,” he concluded.

Besides Swift, the six riders confirmed for Team Sky by organisers of the Tour Down Under, which takes place in South Australia from January 17-24, are the British pair Russ Downing and Chris Froome, the Australians Chris Sutton and Mathew Hayman, Kiwi Greg Henderson and the Italian,Davide Viganò. Katusha is also taking part in the race, but Swift's name does not appear among its list of seven riders.

Meanwhile, Team Sky has today further added to the intrigue by posting a 34-second video to its fan page on Facebook that includes a shot that scrolls up the list of riders in reverse alphabetical order, accompanied by national flags.

That means the first full name you see is that of Australia’s Chris Sutton – but freeze frame and look closely, and you can see beneath his name what appears to be a Union Flag and the top of the letter ‘S’.

It may be nothing more than an in-joke on the part of the production team, but we pride ourselves on knowing our alphabet here at road.cc, and that includes knowing that a name beginning ‘Sw…’ would come after one that starts ‘Su…”

Make of that what you will, although we should point out that Sutton is followed alphabetically in Sky’s confirmed roster by another British rider, Geraint Thomas – mind you, it still looks more like an ‘S’ than a ‘T’ to us.