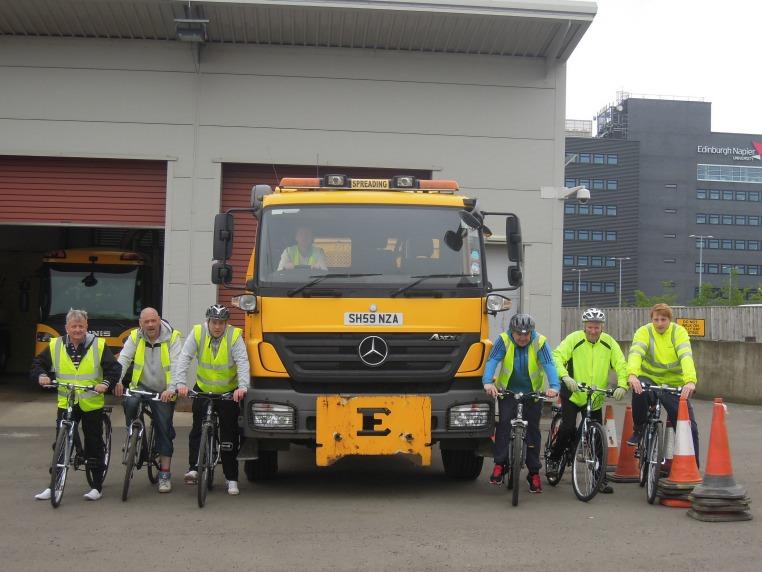 City of Edinburgh Council is giving its lorry drivers the chance to learn how cyclists experience traffic by swapping their trucks for bicycles. The initiative, run in partnership with Cycling Scotland, has been welcomed by a couple who have campaigned for cycle safety after their son was killed in a collision with a lorry.

Currently operating as a pilot scheme, drivers undertake practical and theory-based sessions, aimed at giving them a greater understanding of the dangers cyclists face each day, with lorries involved in a disproportionate number of serious injuries and fatalities of bike riders.

The initial wave of training was aimed at van and lorry drivers working for the council’s transport department and who work in areas such as road maintenance.

Classroom-based training focused on the issues faced by vulnerable road users including pedestrians and cyclists, how to share the road safely with them, how to prepare for trips and about the safety features on vehicles.

The council’s transport convener, Lesley Hinds, said: “The Council is committed to promoting cycling as a primary mode of transport, and as such we have pledged to invest 7% of our transport budget into developing cycling infrastructure throughout the city.

“But if we are to encourage cycling among our citizens we must ensure that they are given a safe and accessible environment in which to do it. By raising awareness of this with our drivers we are leading the way to creating an equal relationship between drivers, cyclists, pedestrians and other road users alike.”

Cycling Scotland’s chief executive, Ian Aitken, added: “Fostering mutual respect is paramount for the safety of all road users and the initial Driver Awareness training for HGVs is a great example of an initiative designed to do just that.

“By putting lorry drivers in the position of cyclists, both in theory and in practice, they will become much more aware of cyclists while out on the road.

“Cycling Scotland welcomes City of Edinburgh Council’s initiative, and is pleased to be delivering the practical element of this training.

“We hope that other local authorities and organisations responsible for the operation of large goods vehicles in Scotland will follow suit.’’

There are hopes that the course will now be incorporated within the training that all of the council’s large goods vehicle drivers have to undergo, and it may also be rolled out to the private sector.

Ian McNicoll, who has campaigned for cycle safety with his wife Lynne after their son Andrew, aged 43, was killed in a collision with a lorry while riding to work in January 2012, welcomed news of the pilot scheme.

He said: “We welcome the introduction of driver awareness training, it’s incredibly important. It’s essential that HGV drivers are given appropriate training and know the risks that cyclists take on the roads.

“While the majority of HGV drivers are good drivers, the number of incidents involving HGVs and cyclists continues to be very high. We’re pleased that the Council is taking this into account with the initiative, and look forward to seeing how the course progresses.”