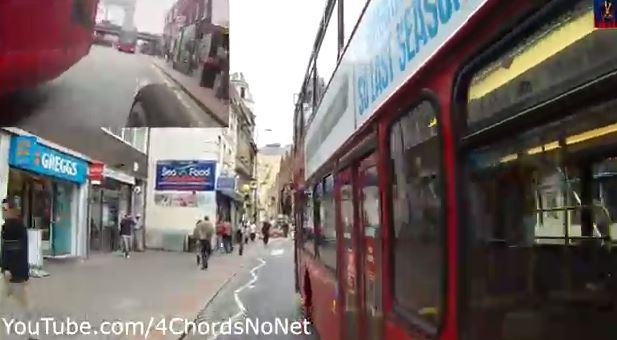 Transport for London (TfL) has apologised to a cyclist after a female bus driver called him a “knob,” with the incident recorded on the rider’s helmet camera.

The incident, involving a number 119 bus operated by Metroland, took place on Katharine Street, Croydon, a little after 2pm on Saturday 12th April.

Footage uploaded to YouTube by user 4ChordsNoNet shows that the bus had cut in on him shortly beforehand on Croydon High Street.

Catching up with the bus, he stopped alongside the driver and asked: “Why did you overtake me there?”

The female driver replied: “I could get past you easy.”

“You were that close to me,” said the cyclist as he rode off.

As he did so, the driver shouted after him: “You know when you nearly killed the old bloke at the Swan & Sugar Loaf [a former pub in South Croydon – ed]? You knob.”

On the video, 4ChordsNoNet adds: “She knows that she’s being filmed, she’s in a liveried vehicle, yet she still decides to ‘have a go’ at me.”

In the ‘About’ section of the video’s page on YouTube, he says:

I contacted both TfL and the bus company direct with regard to this incident. The Depot manager came back the same day and confirmed that this standard falls far below what is expected of their drivers and that he would be speaking to the driver in question.

I am happy with this and have edited the video, blurring out the driver's face. The original video is now unlisted and will be deleted when I have heard back from TfL.

That reply from TfL read:

Thank you for your email of 15 April 2014 about a bus driver on route 119. I understand how you must have felt after this experience and appreciate your concern. Please accept my apologies.

The safety of our passengers and other road users is of paramount importance to us. It is essential that London's bus drivers promote a positive image of London Buses, as well as operating their bus safely and competently.

London's bus drivers receive comprehensive training which includes Customer Services and poor driving standards are unacceptable. In the instance you described, it would appear those training were not put into use. I have made Metrobus aware of your complaint and can assure you appropriate action will be taken.

I hope this incident does not change confidence in us and high standard you have always held our service. We work hard to maintain high standards and are confident the vast majority of London bus drivers do an excellent job. Passenger feedback is extremely valuable and I am grateful to you for bringing this to our attention.

In a reply to a comment to the video, 4ChordsNoNet said: “I've emailed the same depot before when I complimented one of their drivers on his exemplary driving, and I believe that they will take this incident seriously.

“I imagine that the depot manager will give them a right royal bollocking.”