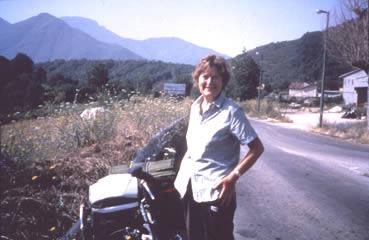 Anne Mustoe, who took up cycling at the age of 54 and rode around the world twice – once in each direction – recounting her travels on those and other trips in a series of books, has died in Syria aged 76 after being taken ill while on another circumnavigation by bike.

The former schoolteacher, who described herself as an “Improbable Cyclist,” recounted on her website that she was inspired to take up riding a bike during the 1980s during a holiday in India.

"In January 1983 I was taking a holiday in India to recover from the rigours of the long Autumn Term,” she wrote. “Somewhere in Rajasthan I looked out of the bus window and saw a cyclist, a solitary European man, pedalling across the immensity of the Great Thar Desert. I was seized with sudden envy. I wanted to be out there myself on that road on a bicycle, alone and free, feeling the reality of India, not gazing at it through a pane of glass.”

Mustoe admitted, “I was not athletic. I was not young. I had never been a keen cyclist. I had no idea how to mend a puncture. I hated camping, picnics and discomfort. In fact, my qualifications for an arduous cycle-ride were minimal. Yet it was the bicycle which had immediate appeal. I made up my mind that morning that I would cycle across India. But the more I thought about it, the more I wondered why I should stop at India. While I was at it, why not cycle round the world?”

Widowed, and with her children grown-up and married, it took Mustoe four years to pluck up the courage to realize her ambition. The girls at her school bought her a Condor bicycle as a leaving present, which she then had customized at a workshop on the Old Kent Road.

In 1987 she began her first cirgumnavigation, setting out from London on a West to East route, much of which – in keeping with an ethos she would employ throughout her cycling career – followed ancient roads and trade routes.

A second round-the-world trip from East to West followed, this time beginning and ending in Rome, and she also undertook a number of other long distance rides, including one from Cleopatra’s Needle on the Thames to Heliopolis in Egypt, the obelisk’s original home. She also returned to the country that inspired her to get on two wheels with a trip across the Indian Subcontinent from Kathmandu in Nepal to Kandy in Sri Lanka.

Mustoe’s wanderlust enabled her to launch a new and unexpected career as a travel writer, her books including A Bike Ride 12,000 Miles Around the World, Lone Traveller - One Woman, Two Wheels and the World, and Two Wheels in the Dust
From Kathmandu to Kandy.

Mustoe’s obituary in The Times records the cycling adventures and earlier life of someone who was a truly remarkable woman.