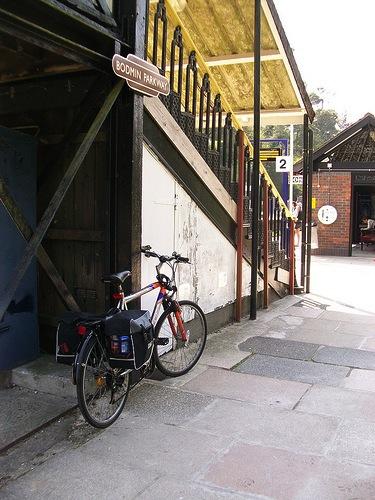 Cornish town that council said was 'too hilly' to be popular with cyclists will now boast 'cycling town' status...
by Sarah Barth

Bodmin is to become Cornwall’s ‘cycling town’ with a new network of cycling and walking routes - just weeks after the council admitted that it didn’t think the town would be able to shift significantly to walking, cycling and public transport.

The plans are at the heart of a £1 billion seven year plan for investment in Cornwall and the Isles of Scilly,

The Strategic Economic Plan has been produced by the Cornwall and Isles of Scilly Local Enterprise Partnership (LEP) and includes Bodmin’s Transport Plan, which promises that from 2016, there will be “a wider Bodmin transport package of measures which includes junction upgrades, walking and cycling infrastructure, public transport provision and new highway infrastructure.”

Cornwall Council has proposals to create a series of cycle routes through the town which will link the Camel Trail to the bike trails created at Cardinham Woods and the National Trust's estate at Lanhydrock.

The authority plans to devise a number of off-road routes, plus new cycling lanes on roads in and around Bodmin.

Cornwall and town councillor Ann Kerridge told the Cornish Guardian that new routes through Bodmin to link the Camel Trail with the trails east of the town at Lanhydrock and Cardinham was a scheme she and the town council had been advocating for some time.

"I'm genuinely very excited at the prospect of the routes which will enable cyclists to come through the heart of Bodmin.

"Some of the routes will be off-road, and obviously landowners will have to be consulted and negotiations will have to take place, but if all goes to plan, the routes could be opened by the summer of 2016. The project will bring more tourists into the centre of Bodmin and additional cycle hire businesses could start up, in fact they will present a number of great opportunities for the town."

The plan as a whole aims to boost the economy of Cornwall and Isles of Scilly by £338 million per year, invest in providing more than 18,000 jobs, support the delivery of almost 14,000 new homes, bring skills up to at least national averages and exceed national renewable energy targets by 2020 - all via a single investment programme drawing together all the available public and private funding streams.

But just last month, we reported how Bodmin Council had said that although a walking and cycling network would be desirable, revitalising town centre trading and improving air quality, the council has said it is ‘unrealistic’.

The council was said to be exploring ‘other solutions’, including creating a northern relief road to bypass the town.
In the council’s Town Plan for Bodmin, published in October last year, it noted: