The latest training tool we have in for test here at road.cc is the £599 iBike Newton+ power meter that calculates your power in a very different way to other systems out there. 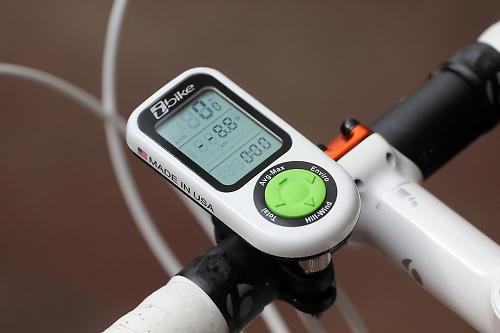 iBike do things differently using a digital accelerometer and dynamic pressure sensors to measure forward acceleration and the opposing air pressure, while a wireless sensor mounted to the chainstay measures bike speed. The system takes its measurements 16 times per second and gives you separate left/right leg data.

First of all, you need to input the total weight of you and your bike, the tyre size, the road surface, your height and your ride position. The iBike system uses these details to determine the coefficient of drag (CdA) and the bike's coefficient of rolling resistance (Crr).

That's the theory. And iBike says that its system doesn't need to be recalibrated over time. What's the benefit of doing things this way rather than using strain gauges? For a start, there's price. The iBike Newton+ power meter costs £599 (the cheapest Stages power meter cranks are £599, but you don't get a head unit. We won't go into the pros and cons of Stages versus iBike here). Plus, it's easy to swap between bikes – the Newton+ stores four different bike profiles so you just switch to the relevant one. On top of that, the Newton+'s sensors are located in the bike computer head unit which means, says iBike, they can offer better water resistance, and there are no moving parts to wear out. The weight is just 82g. We'll go into those features in more depth when we come to the review in a few weeks.

You're sceptical of the accuracy? That's fair enough. The system relies on accurately measuring the air pressure working against you, for instance, and it gets that information via a wind sensor in the head unit mounted to your handlebar. At first sight, that seems like a tricky figure to get right. The proof of the pudding, though, is in the eating, and iBike reckon that their system is accurate (naturally!).

The US brand says that the Newton+ is accurate to within +/-2%, which is what most other brands claim for their power meters too (Power Tap claim +/-1.5%). There are data comparisons between the iBike system and power meters from other brands on the iBike website www.ibikesports.com.

The iBike uses ANT+ so you can use it with other ANT+ devices like a Garmin speed/cadence sensor, for example. You can also add GPS to your rides if you use the Newton+ in conjunction with a smartphone (iPhone or Android).

iBike has its own free Isaac software that guides you through setup and calibration and allows you to display your ride data and analyse your results on either a Mac or a PC. After uploading your rides, you can share them on Facebook or send files to TrainingPeaks or Strava. To be perfectly honest with you, although a lot of fun, reviewing power meters is also a bit of a nightmare. Out of all the products we test, power meters are probably the most difficult. How can you measure their accuracy? All you can do is compare the measurements given by a bunch of different systems, but how do you know which is giving the truest reflection of your power output? If you have three power meters that basically agree and one that gives figures that are wildly different, it doesn't necessarily mean that the outlier is wrong – you can't decide these things on a show of hands!

Still, that's something for us to worry about at this end. We'll set up the iBike Newton+ and start using it alongside a bunch of other power meters and see where we get. We'll report back with our findings on road.cc as soon as possible.

For more info go to www.ibikesports.com or the UK distributor www.dhwagencies.com.