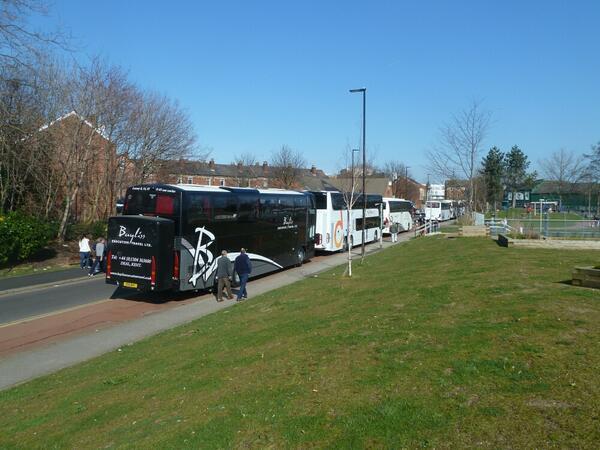 Cyclists in Sheffield have abandoned a protest at police officers who direct away fans' coaches to park on bike lanes - despite a senior officer saying it was inappropriate to do so - after a senior officer apologised and said it wouldn't happen again.

Cyclists say these police actions including officers parking away support coaches along cycle tracks near Bramall Lane on Sheffield United match days are ‘putting them at risk’,

The parking of up to 50 coaches on Asline Road – part of the Sheaf Valley cycle track route - sparked a protest today. The protest organiser, Matt Turner, said the road “is one of the few safe ways to avoid cycling along the terrifying Queens Road or London Road.”

But speaking at the Sheffield City Council Cycle Forum this week South Yorkshire Police's Motorcycle and Roads Policing Inspector said that although there were policing reasons for blocking the route, the police now accepted that it was a hazard for cyclists.

To listen to a recording of the meeting, click here.

Mr Turner told road.cc the protest "will be rescheduled if it happens again." but that it "felt provocative to continue after the meeting."

Earlier in the week, according to the Twitter account SUFC_Police, “Asline Rd is coach holding area. We ensure safety always and its also part of the road closure plan.”

Mr Turner has campaigned against abuse of cycle lanes in Sheffield for more than a year.

He wrote on his blog: “The police need to be setting an example. They’re the ones who should be stopping that sort of behaviour, not causing it.”

“Parking coaches on Asline Road has been custom and practice for many years. However, I appreciate this doesn’t make it right to block the cycle path.

“I am aware some of my team have been working with Sheffield United to resolve this issue.”