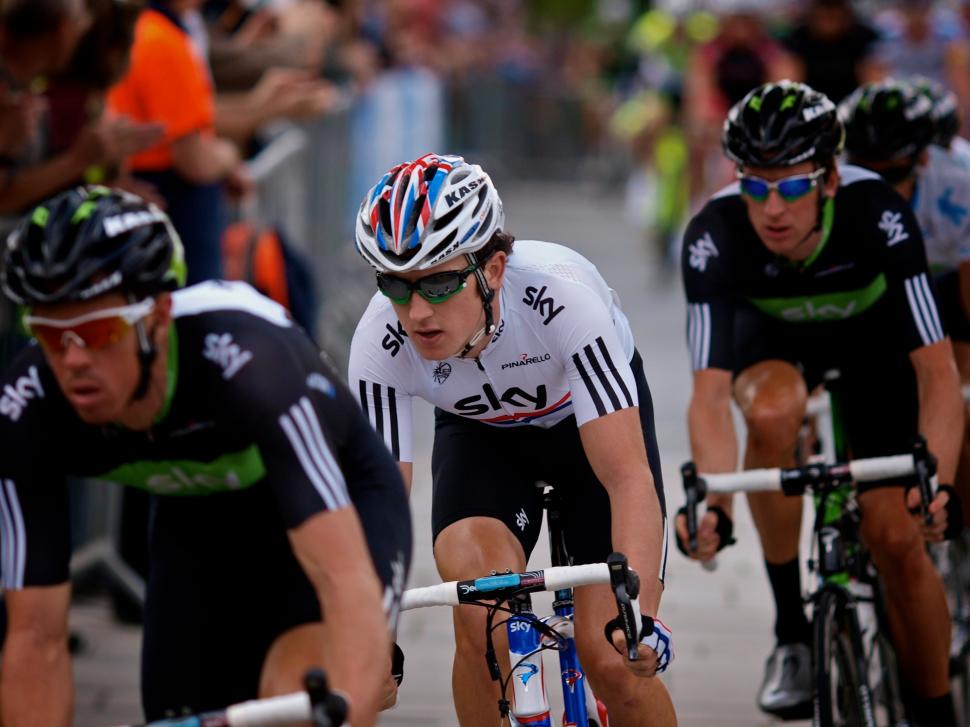 British Cycling coach Shane Sutton believes Team Sky's Geraint Thomas is capable of winning a Grand Tour in the future. He also said that the 28-year-old should not consider moving to another squad, saying that "Sky will be Geraint Thomas’ team."

Thomas, twice Olympic team pursuit gold medalist, said earlier this month that he saw his future in stage racing rather than the Classics.

Last week, he demonstrated his capability as team leader at Paris-Nice, which he led for two days and lay second overall, still in contention for the victory, before crashing out on the penultimate day of racing.

He has written of the physical and mental pain the crash caused him in his BBC Sport column, but should take strength from Sutton’s encouraging assessment of his future.

In an interview on Wales Online, Sutton, who has worked closely with Thomas as part of the British Cycling set-up and also while head coach at Sky until January last year, says his Grand Tour hopes for the rider are echoed by team principal Sir Dave Brailsford.

“Dave and I talked about it three days ago,” Sutton said.

“Him and I know Geraint can win a Grand Tour. Geraint and Peter Kennaugh are probably two of the most exciting British riders when it comes to Tour potential and fortunately one of them (Thomas) is our’s here in Wales.

“The only difference between Peter and Geraint is that G can time-trial better and push his way through air.

“He had a chance to lead Sky at Paris-Nice, one of the most iconic races in the world, and proved his ability.

“He was going to podium and I reckon he would have got, on the stage in which he crashed, the bonus seconds in the sprint he needed to have been back in yellow."

Sutton didn't express a timescale on his prediction that Thomas would lead Team Sky at a Grand Tour. He did, however, note that the supporting role the Welshman will play to Chris Froome and Sir Bradley Wiggins in the coming year will be important in his development.

He said: “Geraint understands the work ethic and how to win it while getting drink bottles for ‘Froomey’,  but he’s got to learn to lead the team in a Grand Tour, whether it’s the Tour de France, Giro D’Italia or Vuelta Espana.

“Froomey learnt from Brad by following him around France for three weeks in 2012.

“G needs to learn from both of them what it takes.

“Geraint is solid, sustainable and also has flair. He can make the move when he wants.”

Sutton notes that at the age of 28, Thomas may not be satisfied with a supporting role in the coming years, but says that Sky is the place for the Welshman to achieve his goals.

“G has thought about his options,” Sutton said. “The long and short of it is Sky will be Geraint Thomas’ team.

“Froomey has got his day and it’s going to be G’s day after him ... British team, British leader!”

Sutton says he believes Thomas can regain the national road champion's jersey in June's National Road Championships in Monmouthshire. The Welshman won the title in June 2010.

It was while wearing the national champion's jersey less than a fortnight later that Thomas secured his highest ever placing on a Tour de France stage.

He came second to Thor Hushovd on Stage 3, which took in some of the pavé sectors used in Paris-Roubaix and putting him into the best young rider's jersey.

“All the top riders will be at their best because the Tour de France starts in Yorkshire the following weekend,” said Sutton.

“He’s on home roads and that champions’ jersey, which he had before, means a lot to him.

He also thinks Thomas can win the time trial, saying: “Both courses are tough but made for Geraint.

“He will throw himself into it and is prepared to take risks on the corners, which might be the difference in the time-trial against Brad, Froomey, Alex Dowsett and Stannard.

“I’m backing G to do the double, which would be a pretty rare feat, done I believe only by Millar back in 2007 and at the home of cycling, Monmouthshire.”

In his column on the BBC Sport website Thomas wrote of his disappointment after crashing out of Paris-Nice.

However, he did note that he was happy with his performance up until that point, and could take plenty of positives away from the performance.

The Sky rider described the fall which saw him land underneath a crash barrier as “not ideal”.

He wrote: “All that was going through my head when I was on the side of the road was that my race was over and my fight for general classification victory was done. I knew it straight away, so the disappointment was instant.

“My back was the worst bit, because I slid quite a distance on it. So I have quite a bit of road rash because, as well as ripping my jersey to shreds, it took a lot of skin off.

“And then I had a chunk out of my hip as well so I had to have some stitches put in that once I got back to the hotel. I am pretty bruised and quite sore at the moment.”

But in terms of recovery, Thomas is confident that the crash will not affect his season.

“We made the decision to pull out, and not to ride on the last day of Paris-Nice on Sunday,” Thomas wrote.

“Instead I went home and used it as an extra day to recover and heal up and get ready for the Spring one-day classics season, which starts with the famous Milan-San Remo race this weekend.

“If I had raced on Sunday, it would have just prolonged the time I took to get fully fit.”

Thomas had set out at Paris-Nice with a point to prove to himself, and to everyone else, that he could be a contender in big stage races.

“I was confident I could do the job but it is one thing thinking that I could get a result and another thing actually going out there and doing it.

“I think I proved to myself and a lot of other people what I could do.

“I said in my last column that this season is a big one for me to decide my direction as a rider and the Paris-Nice race has definitely given me that incentive to really press on and focus on being the man going for the general classification wins in major stage races.”