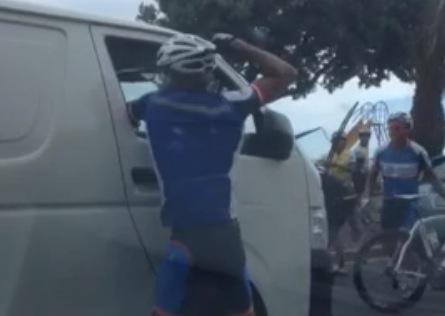 Muhammedeyeh Cycling Club says it “vigorously and vehemently condemns" behaviour of those involved...
by Simon_MacMichael

UPDATED: Two cyclists have appeared in court in South Africa this morning in connection with a road rage incident in Cape Town on Sunday in which a van driver was punched and assaulted with pepper spray. The incident was filmed by the occupant of a nearby car.

The men are reported to have been arrested last night and held in police cells overnight. They have also been suspended by their club, and have had their entries to Sunday's Cape Argus Pick n Pay Cycle Momentum Tour withdrawn.

In a statement published on its website, Muhammedeyeh Cycling Club said it “vigorously and vehemently condemns the behaviour “ of those involved in the incident.

It added that it “has never and never will condone these actions,” and that disciplinary proceedings were under way against the riders believed to have been involved.

Some of the incident was captured on video by the occupant of a nearby vehicle, Symon Scott, who said: “There was a lot more going down than what you can see in the video."

The driver of the van, 19-year-old student Ibrahim Waggie, had volunteered to help clear up the road after the 10km Nelson Mandela Commemorative Walk on Sunday.

In its press realease, Muhammedeyeh Cycling Club said it “wishes to apologise to the affiliates, the Western Province Cycling Association, Pedal Power Association, Cycling South Africa , the Sponsors, Muhammedeyeh Primary School and the entire community at large for this unfortunate incident.

“We also wish to extend our sincerest apologies to the Big Walk committee.”

There was no mention of Mr Waggie, possibly for legal reasons.

The club said that it had passed the names of several of the riders identified to the Pedal Power Association (PPA) and Western Province Cycling, which it says will begin disciplinary proceedings against them.

In a statement issued this afternoon, the PPA said:

The Pedal Power Association has withdrawn the 2014 Cape Argus Pick n Pay Momentum Cycle Tour entries of two of the riders who were involved in the incident during which a motorist was assaulted a few days ago in Sea Point.

In addition, these two cyclists have been suspended from the Association, pending a further disciplinary investigations. Further investigations are still underway regarding other individual/s involved.

The cyclists were arrested by the Police on Tuesday 3 March 2014 and spent the night in jail. They were due to appear in court today.

The Association thanks the Mohammadeyah Cycling Club for their full cooperation in this matter.

The riders involved could ultimately face a life ban from all events organised by the PPA, including the world’s biggest mass participation cycling event, the Cape Argus Pick n Pay Cycle Momentum Tour, which takes place this Sunday.

The PPA, which has 16,000 members throughout South Africa, is together with the Rotary Club of Claremont, one of the principal beneficiaries of the ride.

Muhammedeyeh Cycling Club, founded in 2005 at Muhammedeyeh Primary School, is now a development club and has been given 93 free places in the event, due to attract up to 30,000 riders.

Hayward added: “It’s horrible, and we don’t support behaviour like that from any cyclist – no matter how heavily provoked.

“One could also see that they were riding abreast. We call on all cyclists to obey the law.

“We want to root out the bad guys. We would encourage people who see transgressions by cyclists to report them to info@pedalpower.org.za”

IOL News added that as of Tuesday night, no arrests had been made, with Mr Waggie saying that he had “heard nothing further” from the police.