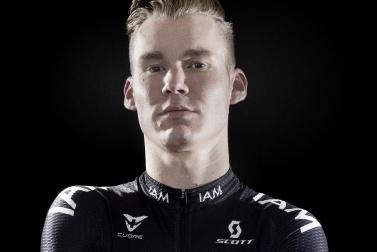 The funeral has taken place of Kristof Goddaert, the Belgian professional cyclist who lost his life last week when he was run over by a bus after coming of his bike while riding in Antwerp after he skidded on a railway track in the city’s harbour area.

The 27-year-old’s family and friends were joined at the service at the city’s Sint Pauluskerk by 40 teammates and staff from IAM Cycling, the Switzerland-based team he had ridden with since the start of 2013.

Tributes from his colleagues were led by the team’s road captain, Martin Elmiger, who had ridden alongside Goddaert at AG2r-La Mondiale before they both made the switch to IAM Cycling.

Elmiger, quoted on the team’s website, said: “He was the perfect example of how to live life to the maximum and to make the best out of every situation.  He didn’t miss out on anything.

“Nobody saw his destiny, and that’s why it is so hard to understand.  The only thing we can do is accept it and let him go with love.”

The team’s report on the funeral said:

Those present universally admitted that they were lucky to have known him, after which they left the church to accompany Kristof Goddaert to his final resting place while the skies unleashed a torrent of rain, wind and cold – seemingly a sign that the heavens had also decided to pay a last homage to Kristof, who had so loved his life on the roads.

The article emphasised that while Goddaert may not have been among the most heralded of the riders on its roster, the domestique was an integral part of the squad.

Praised as being serious and hardworking on the bike, off it he was described as “amiable, even a joker,” something that comes across strongly in the memories of him shared by his teammates.

Among those was Heinrich Haussler, who remembered his friend and colleague in a powerful and highly personal post entitled ‘Goodbye Kristof’ written for Cycling News.

The Australian rider recalled how he had first heard the news after “being bombarded with text messages asking me if knew about his accident,” and how he had hoped against hope “that his name would flash up on my phone and he’d be there to say he was okay and that the news had been wrong.”

Haussler added: “I know it might sound weird, but in some way I still think Kristof will be with us in the peloton.”

That may never be felt more keenly than at tomorrow’s Omloop Het Nieuwsblad, which starts and finishes in Ghent, some 40 kilometres southwest of Antwerp.

The race will be preceded by a minute’s silence as riders and fans pay tribute to Goddaert’s memory and that of Jan Hoet, the art curator and founder of Ghent’s SMAK contemporary art museum, who died yesterday at the age of 77.