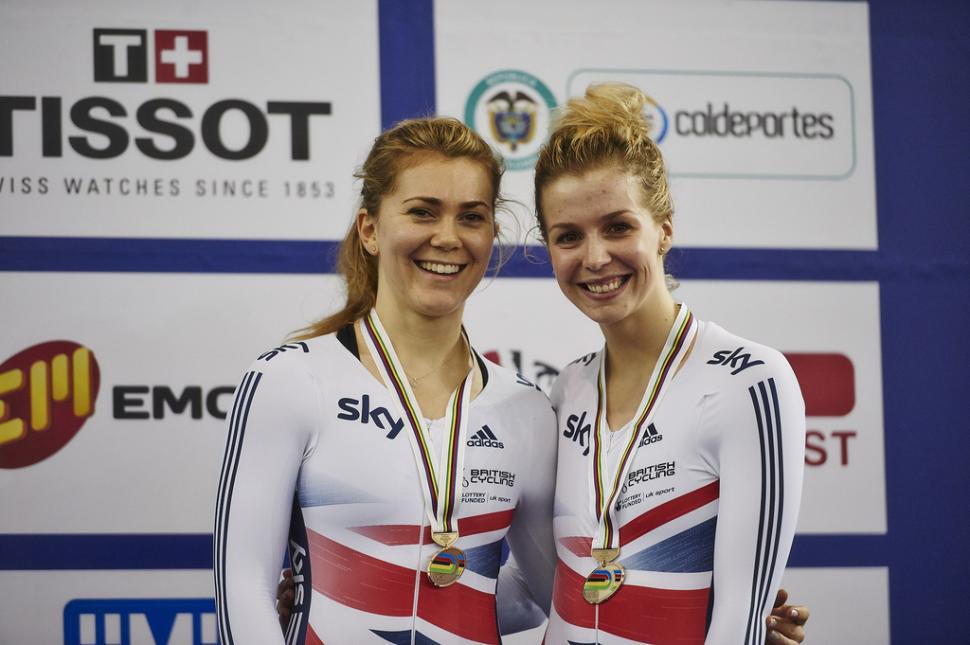 Medals for Varnish and James, but men miss out in team pursuit and team sprint
by Simon_MacMichael

Great Britain came away from the opening day of the UCI Track World Championships in Cali, Colombia with a bronze medal in the women’s team sprint. But there was disappointment as the country finished out of the medals in the men’s version of that event, as well as in the men’s team pursuit.

Becky James, who 12 months ago in Minsk won the individual sprint and keirin in the first World Championships of the post-Victoria Pendleton era, partnered Jess Varnish, in the team sprint yesterday.

Qualifying third fastest to put them into the bronze medal run-off against Russia, Varnish – relegated along with Pendleton at London 2012 in the event following an illegal changeover – led James through the first lap.

The Russian pair of Elena Brezhniva and Anastasiia Voinova led at halfway, but James powered through to clinch the bronze medal, the same as she took in the event last year.

James, who rides in tonight’s 500m time trial, told the British Cycling website: "I'll take everything a day at a time. Got today out the way and got a bronze medal. I'll see how each day goes and do my best."

Varnish, who missed riding in Minsk last year through injury, added: "It was a solid performance tonight.

“It's a really different track to what we've ridden on and you can't really compare it to other performances. I think we should be happy. It's a really good start."

Defending champions Miriam Welte and Kristina Vogel won gold in the final against China, the country they beat at the London Olympics.

In the men’s team sprint, Great Britain had the same three riders as last year, Olympic Champions Jason Kenny and Philip Hindes, plus Kian Emadi. Their qualifying time of 43.617 was only enough for fifth place, however.

New Zealand beat Germany in the final to take gold, with France getting the better of Russia in the bronze medal race.

“We're disappointed with the result, but the time itself and the way we rode wasn't that bad,” Kenny reflected. “It could've been a little bit tidier.”

“We're only fractions off and we've definitely made a step forward, particularly from where we were last year. We've been consistently getting better this year, which is promising,” he added.

Last year, Great Britain won silver in the men’s team pursuit as Australia took the rainbow jerseys of world champions, but this year were missing Andy Tennant and Stephen Burke, with Jon Dibben and Owain Doull joining Ed Clancy and Sam Harrison in the line-up.

The time they set of 4:04.419 proved to be only the eighth fastest, with Australia defending their title as they saw off Denmark, and New Zealand claiming bronze.

Referring to the illnesses that ruled out Tennant, who has won World Championship gold in the event, and double Olympic champion Burke, Clancy said: "We didn't announce it on Twitter, but behind the scenes we've had some problems.

"We knew a week ago our back was against the wall. (But) despite the fact we didn't have a couple of our more established riders in the line-up, we were still hoping to get a ride in the final.

"That's sport. Some days you go better than you think, other days you don't go quite so well. We have tried a bit of a different approach for these track worlds. Perhaps it just hasn't paid off."

You can watch highlights of last night’s racing on the UCI Channel on YouTube.

You can watch tonight’s racing, which starts at 23:20 UK time, on the BBC Red Button.

Since the UK is one of the countries with a broadcaster covering the event live, the UCI’s livestream on its YouTube channel is geo-blocked to internet users here.