Bike theft is a constant source of worry for most cyclists, whether it’s locking bikes up at the office or keeping them in a shed or garage at home. That’s where the new SHYSPY comes in, a GPS tracker that fits inside the seatpost of you bike and can track the location of your beloved bicycle if it gets stolen. It’s currently on Kickstarter and seeking £40,000 funding

Put simply, SHYSPY is a GPS tracker that you fit to your bicycle and, in the event your bike is stolen, should aid recovery by showing you the location of your bike. It’s completely invisible to potential bike thieves as well, because it’s concealed inside the seatpost. Unlike some other anti-theft products, it can’t easily be removed, in fact it’s doubtful a bike thief would even know the bike they’re stealing has a bike tracked inside the frame. 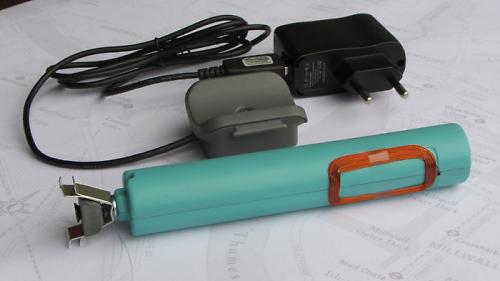 The tracker uses a GPS module and a SIM card to provide accurate location details straight to your computer or smartphone. The 2500mAh battery is claimed to last about 30 hours, and can easily be charged wirelessly or via USB. The tracker can be powered down into passive mode, so not tracking its location, and that extends the battery life out to a claimed 5 weeks.

The tracker fits inside the seatpost of your bicycle and uses a mobile SIM card along with a GPS module to accurately track the location, and is able, to deliver the location of your bicycle to a desktop computer or mobile phone. It’s small, just 22mm side by between 150-200mm long, depending on battery options. They’ve produced a list of compatible seatposts over on the Kickstarter page, worth checking before you decide to invest. The tracker has obvious bike theft potential, but the company behind it also says it can be used to track and record your ride activity, much like a Garmin or smartphone app using GPS. Apparently activities can be tracked using the smartphone app and download to GPX which you can then upload to a website like Strava or Endomondo. Which makes it more compelling than a device that is basically unwanted weight most of the time you're riding. For town and city commuters though the little extra weight will be of no concern.

SHYSPY has also produced a version of the tracker which uses GSM tracking, using mobile phone mast triangulation, as a low cost alternative to GPS. It’s only accurate to within 100 metres. It relays location data either to your phone via SMS or through the SHYSPY app.

SHYSPY is currently trying to raise £40,000, with 25 days to go. You can pledge just £1 to support the project, but £33 will get you the GSM tracker, while £55 will get you one of the early bird GPS trackers. There are currently just 43 out of 100 of those left though, so you might want to be quick if you want one.

If you can’t guarantee theft prevention, then the new  SHYSPY aims to make locating a stolen bicycle easy. I had a bicycle stolen from an office I used to work in a few years ago, and never saw it again. If I had had a tracker such as this fitted inside the frame, I might have been able to track its location and possibly stood a chance of retrieving it.

Find out more at www.kickstarter.com/projects/385904042/shyspy-gps-gsm-tracker-for-bicycles

1
Assos releases 2021 Equipe RS winter range based around a £575 jacket
2
Near Miss of the Day 486: Lorry driver cuts across cyclist at roadworks in "terrifying" overtake
3
Ratio has a nifty way to add an extra shift to your 1x11 SRAM mechanical groupset
4
Giro d'Italia zip-gate. Hindley and Kelderman struggle with jacket issues on a freezing Stelvio
5
Canyon set for €500m+ private equity sale?
6
Giro d’Italia: Riders board buses after riding through neutral zone after Stage 19 is shortened in response to peloton protest
7
Near Miss of the Day 487: "This vehicle is turning left" (having first pulled alongside you)
8
Milan showdown as Tao Geoghegan Hart wins Giro d’Italia stage 20, and Jai Hindley now leads race by tenths of a second