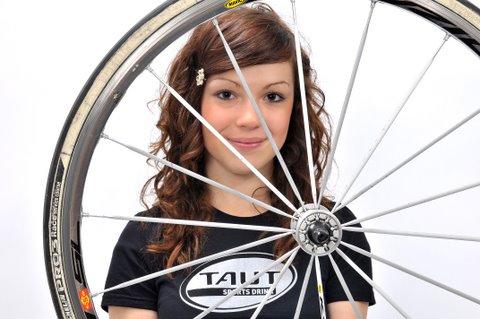 One of Britain’s brightest young female cycling prospects has won an award recognising her talent and dedication.

Lucy Garner, aged 14 and from Leicester, won £1,000 in the Taut 100 awards, which aim to recognise “young athletes who have shown extraordinary levels of excellence, passion and natural talent in their chosen sport.”

Candidates for the awards, which are sponsored by energy drinks brand Taut, are drawn from 60 Summer Olympic, 20 Winter Olympic and 20 non-Olympic disciplines. Winners also receive a supply of the drink.

Past winners of the award include 15-year-old diver Tom Daley, who missed out on a medal at Beijing in 2008 but came back to win the World Championship 10 metre individual title earlier this year, who said: "Winning the Taut 100 was a massive boost and it certainly helped me get to Beijing last year. I'm sure it’ll also be a big help for people like Lucy who’re determined to succeed in their chosen sport.”

Sir Matthew Pinsent was among the judges who selected Lucy for her award, and the four-time Olympic gold medal winning rower commented: ““Lucy has been selected to compete at each stage of the performance pathway which shows she has achieved a consistently high level of performance. Her natural talent and potential has been recognized by Taut and as such she was nominated for a 2009 award.”

Lucy is a member of the Olympic Talent Team and is also current Under 14 National Track Champion. She has also enjoyed success on the road and in cycle cross, and won two gold medals at the 2009 schools games.

Her name now goes on the shortlist for the overall winner of the 2009 Taut 100 programme, which carries a prize of £5,000. As well as athletes from other sports, she will be joined on that list by fellow cyclist Hannah Barnes, also a member of the Olympic Talent Team, who won a Taut 100 award earlier this year.

1
Team GB says Denmark Olympic team pursuit squad should be banned over use of medical tape on legs and "aerodynamic undervest"
2
Win with Shutt Velo Rapide! Cycling kit worth £510 up for grabs in our latest huge competition
3
Father of two nearly killed in collision urges people to 'think about the hurt they could cause'
4
Five cool things coming soon from Boardman, Bryton, Megmeister, Hindsight and Sigr
5
Cyclist who killed London pedestrian jailed for two years
6
Pick-up driver who crashed into group of cyclists charged with murder
7
BMX gold for Team GB’s Bethany Shriever, silver for Kye Whyte
8
Adidas’ radical-looking 3D CMPT glasses are super-light... and super-pricey