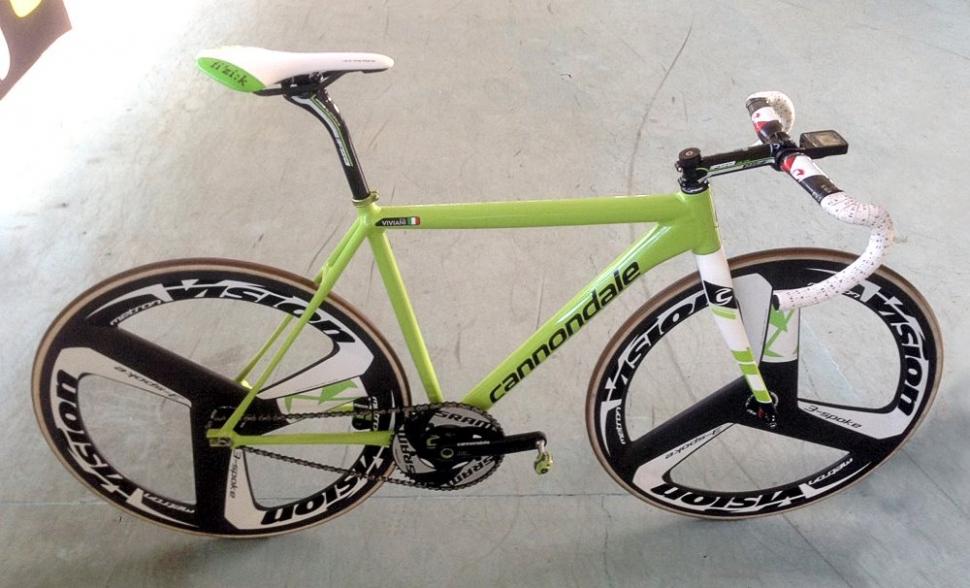 Is Cannondale set to launch a CAAD10 track bike this year? Photos of a prototype CAAD10 track bike being ridden by Cannondale Pro Cycling's Elia Viviani suggests they might be, but the company is being very tight-lipped about whether the bike will be released to the public. Our hunch is it probably will.

The bike pictured above has been produced solely for the team so they've got something to race in track events. Sprinter Elia Viviani used his to race to victory in the European points and Madison races at the end of last season, and will use it again for the 2014 UCI Track World Championships at the end of the month (Feb 26 - March 2) before switching to the road for the rest of the season.

The release of a CAAD10 track bike would fill a gap in the company’s range, vacant since the CAAD5 Capo track bike was discontinued in 2008. Before that Cannondale used to produce the Track frame during the 1990s, there are still a fair few knocking about on eBay, but they command a high price. This very tidy 1993 example is currently going for £2,689.61.

We can’t tell much from this photo, obviously that it’s based on the regular CAAD10 road frame that we reviewed some time ago. We imagine weight is most likely in a similar ballpark to the road frame, at about 1,150g for a 56cm frame. It has a tapered head tube (1-1/8”to 1-1/4”) with a full carbon fibre fork, and a BB30 bottom bracket, the standard that Cannondale developed.

Like the road version, the frame is manufactured from SmartFormed 6069 alloy tubes with double-pass smooth welding and similarly profiled main tubes to the road going CAAD10. There’s an absence of cable stops, obviously, horizontal dropouts and no bottle bosses. The geometry and dimensions of the frame have likely been modified for life on the track.

That's about all we know for now, we'll let you know more as soon as we do. In the meantime, there are more photos over on Cannondale's Facebook page if you want a closer look.