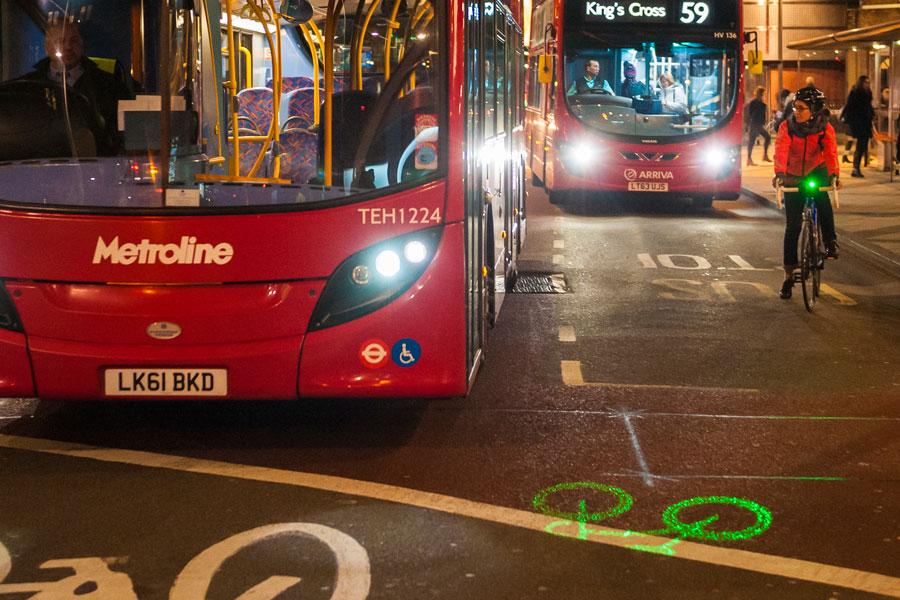 The Blaze Laserlight, which gives advanced warning of the approach of a bike by projecting a bike symbol on the road ahead, has landed a £300,000 cash injection from venture capital firm Index Venture and Sam and Holly Branson, the son and daughter-in-law of Virgin empire billionaire Richard Branson.

Thanks to a successful Kickstarter campaign, and the investment, Blaze is today taking orders for the innovative light, and designer Emily Brooke is planning a whole series of urban cycling products to follow on.

Brooke came up with the idea while studying product design at Brighton University.

“Three years ago I’d never been on a bike before,” Brooke told the Evening Standard’s Oscar Williams-Grut. “I decided to cycle the length of the UK for charity during my studies. I realised the countryside was great but the city was a nightmare.

“In my final year we had to design a product from start to finish and I gave myself the theme of urban cycling. I spent six months working with a driving psychologist, the bus company and a lot of other cyclists – one stat stood out, the fact that 79 per cent of cyclists hit are travelling straight ahead and the vehicle turns into them.” 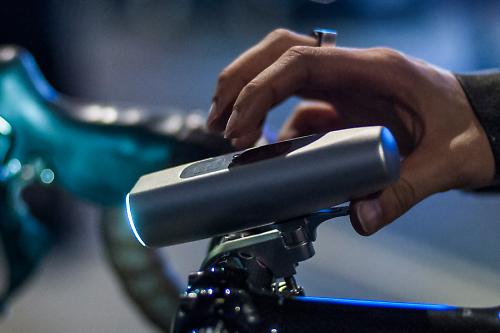 She hit on the idea of a light that projected a bike symbol on the road several metres ahead of the bike.

Brooke told Elizabeth Anderson of Management Today: “Having a laser projection that serves as early warning could transform bicycle safety.”

Over a year of development, numerous prototypes and a crash course in starting and running a business later, Blaze is taking orders for the Laserlight, at a cost of £125.

For that you get the aluminium-bodied Laserlight itself, which is a 300-lumen front light as well as projecting a bike symbol on the road; a USB cable that charges the light via an Apple-style magnetic socket; and a steel mounting bracket with shims to fit handlebars from 22mm to 32mm.

With big-money backing, Brooke is already planning to branch out, with a focus on urban cycling and safety.

“We want to make Blaze a global urban cycling brand,” she said. “We’ve already got six other products we’re looking at, such as bike locks and helmets.

“Over half a million journeys are made in London every day but personal safety is still by far the biggest barrier to participation.

"We are very conscious that making cycling safer requires equal parts infrastructure investment, political will and a change in the attitude of a lot of road users, regardless of the number of wheels, but we very much hope that our light would make a difference.".”

Commenting on the deal, Holly and Sam Branson, daughter and son of entrepreneur Richard Branson, said: “We invest in entrepreneurial activities to help make a difference in the world and Blaze are a brand using exciting technology to make the experience of urban cycling better.”

1
Shimano takes over Tour de France neutral support from Mavic
2
Cycle to Work scheme bikes (temporarily) don't have to be used for commuting
3
Cyclist crushed after farm worker failed to secure straw bale to trailer, court told
4
Police investigating cyclist Tony Parsons' disappearance confirm his body has been found
5
Near Miss of the Day 521: Close pass ... by a police van (plus how it all went a bit Kafkaesque afterwards)
6
eBay seller refuses to accept bike auction offer – says "would be unhappy if I sold to Scouser"
7
Council has "no intention to enforce" parking restrictions in segregated cycle lane where cars are parked bumper to bumper
8
Fears new cycleway will lead to drunkenness, drug taking and 'naked selfies in the woods' (no, really)