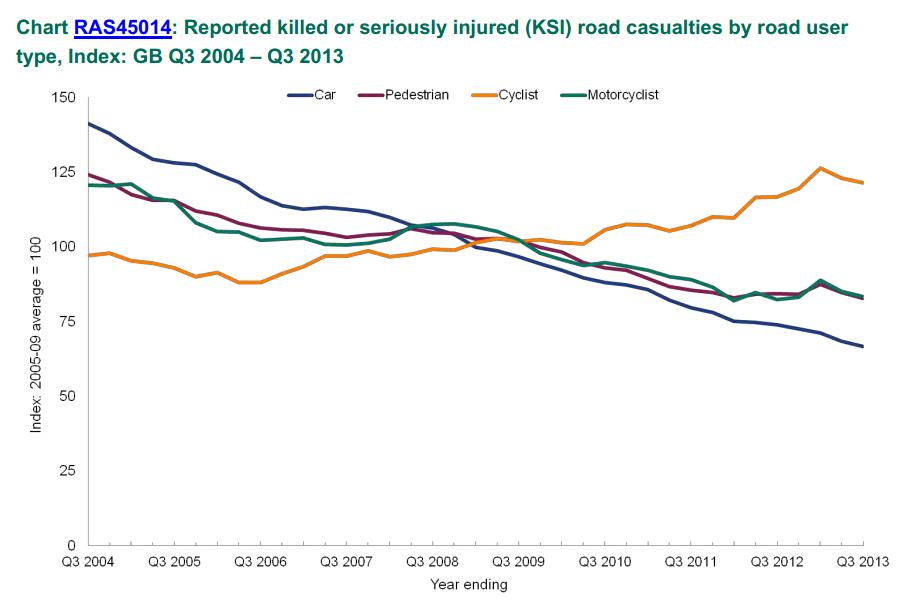 Figures released today by the Department for Transport (DfT) reveal an 8 per cent rise in cyclist casualties from July-August 2013 compared to the same months of 2012, with the number killed or seriously injured (KSI) up 2 per cent.

Combined with annual figures which show a 2 per cent drop in cyclist KSIs in the year to September 2013 but bigger falls among all other types of road users, the figures are likely to lead to renewed calls to improve cycle safety.

According to the DfT's Reported Road Casualties in Great Britain: Quarterly Provisional Estimates Q3 2013, some 6,380 cyclists were injured on Britain's roads in the third quarter of last year, up from 5,902 in the comparable period of 2012, a rise of 8 per cent.

Besides people on bicycles, only motorcyclists saw casualty numbers increase during the three-month period, with both all casualties and KSIs up by 1 per cent.

The DfT consistently warns of the danger of reading too much into quarterly statistics since such short-term data can provide a misleading picture due to factors such as the weather.

Indeed, in its report, it says: "The markedly drier weather for 2013 would have likely increased the number of vulnerable road users (particularly motorcyclists and pedal cyclists) on the road, relative to the same period in 2012, thus increasing their relative exposure to accidents."

Nevertheless the rolling 12 month data show that casualty figures for all classes of road users are falling more quickly than they are for bike riders - and as the chart below, supplied by the DfT, shows, over the past decade, it is only cycling casualties that are on the rise. 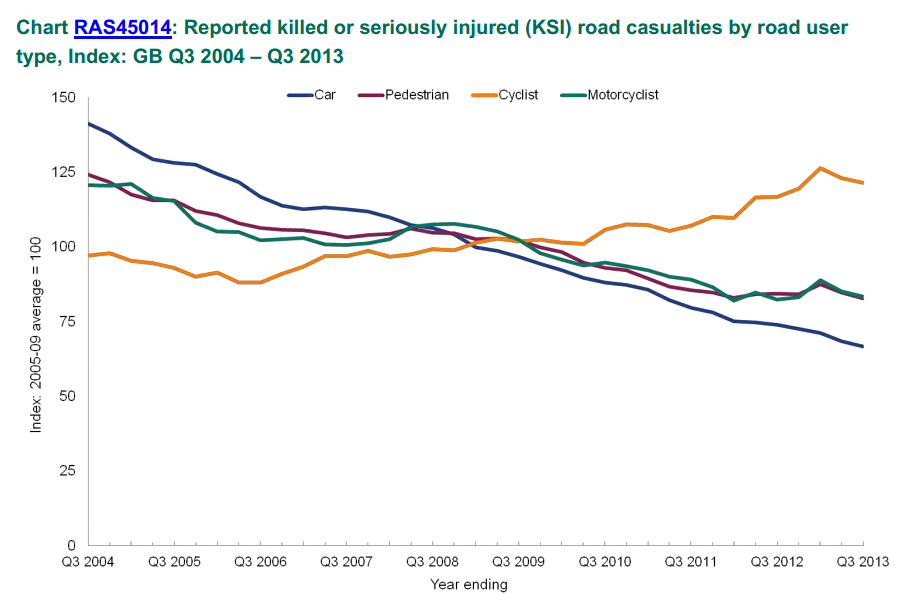 In the 12 months to 30 September 2013, there was an 11 per cent drop in the total number of road casualties in Great Britain, with KSIs falling by 15 per cent.

The figures do not in themselves prove that cycling is getting more dangerous. Besides variables mentioned above such as the weather, other factors that need to be taken into account include any growth in the distance being cycled, something that is notoriously difficult to assess with any accuracy from year to year.

With the data published today relating to the third quarter of 2013, covering July, August and September they do not account for casualties in the final three months of the year, including a two-week period in November when six cyclists lost their lives in London alone.

The individual data sets can be found here.